Moldova was shaken by the Russian invasion of the Ukraine. To the tragedy of the brother country —with which it shares, among other things, a border to the north, east and south—, joined a bad omen. Let Vladimir Putin continue to expand it west to Chisinau and to the Romanian gates of NATO.

The reality of the breakaway region of Transnistria, with Russian troops illegally based since the Soviet collapse, did not invite optimism. Nor that the Moldovans, like the Ukrainians, have lost their qualms. They vote mostly for the liberal and pro-European options, above the reminiscences of the Soviet century, and they endure with less and less patience the blackmail of the oligarchs related to the Kremlin.

Moldova is, since June last year, a candidate to join the European Union, which it helps the small republic as it can with million-dollar transfers and massive shipments of gas from Romania.

ANDhe government of Maia Sandu is barely making progress on the required reforms. But along the way he comes across the evil efforts of Kremlin agents. with bblockages of electricity and gas supply, through Gazprom. With protests financed by the oligarchs. With constant disinformation campaigns. With various forms of pressure, in short, so that the Moldovans give up.

Nicu Popescu (Chișinău, 1981), Minister of Foreign Affairs and European Integration and Deputy Prime Minister, during his visit to Madrid, he does not hide it. He assumes that the future of his country is inextricably linked to that of Ukraine. He backs the transfer of Leopard main battle tanks to the resistance: “Any help they get helps maintain their territorial integrity, and the rest of them too.” And he oozes optimism for a kinder future for Moldova — no neutrality towards Russia, no extortion from the oligarchs.

What message is the Kremlin trying to send with the cuts, the protests, the pressures?

The most important was in November, when almost 90% of the country was left without electricity for 72 hours. But, at the same time, we haven’t had any more blackouts since then. Yes, there are other problems with the same origin. On several occasions, Russian missiles have flown over our airspace. But, after all, it is not usual. The economy is growing. Peace reigns. The airspace is open.

But the economic damage is immense.

Moldova has been diversifying its commercial structure for years, especially since the signing of the free trade agreement with the European Union. We significantly redirected our exports and, even before the war, the Russian market barely accounted for 9% of exports. That of Belarus is over 3%. Our links with the EU are much deeper, and that has helped us to be more resilient on the economic front.

How have you overcome the closure of routes and the blockade of the port of Odessa?

It is clear that part of our imports and exports were through Odessa, in the Ukraine. It got complicated and we replaced it with Romania and Bulgaria, which is more expensive for us. Prices have gone up. Inflation grew to 35% last year. But we have made enormous efforts to help entrepreneurs and we have not seen the availability of food compromised. We continue to expand our markets. Especially for agricultural products, which are the most dependent on Russia.

It could be worst.

Undoubtedly, the darkest period was at the beginning of the war. Even three or four months before we prepared for that possibility, when we were warned from the United States and other Western countries. But we did not expect anything like what came. We do not imagine large-scale attacks, in Kyiv, in Odessa. The psychological impact. The number of refugees.

No country withstood the pressure from Moldova in the first months.

It was not easy. We hosted hundreds of thousands of people in private homes. They received assistance, blankets, food, transportation. The State was up to the task, and this leads me to be optimistic about our ability to move forward, to cooperate in the search for solutions for the region. It has certainly been a lousy year. But if we compare it with the scenario of February and March, when we had to prepare for the possible arrival of tanks at our borders, surely with the intention of crossing them, it is less dramatic.

Nicu Popescu, during the interview.

How did you handle the situation?

Of course you develop a certain psychological resistance, even political. Many of us have relatives and friends in Ukraine, including my colleague Dmitro Kuleba [ministro de Exteriores de Ucrania]. Whatever happens in Moldova, the situation is infinitely better than in Ukraine. And the Ukrainians are an example of courage and fearlessness. They resist. They fight. They are not intimidated by the cold, the Russian fire or the lack of energy supply. I do not forget it. We don’t have too much room for complaint.

They share EU candidate status with Ukraine. Beyond the necessary reforms, have you reached an internal consensus?

By tradition, we have a pro-European majority. It is true that there is a minority with other geopolitical preferences. We are a country extremely exposed to Russian propaganda on television. But, with their votes, the Moldovans prove their will. And I’ll tell you something else. We have a strong Europeanist majority, but we have an even larger majority of Moldovans who want to live in peace. And this implies, fundamentally, that we join the European Union.

Are you suggesting that the war is uniting the Moldovans?

Not even those who have traditionally voted for pro-Russian parties want to live in a war zone. They don’t want to live in an autocratic state where their vote doesn’t count. They enjoy the virtues of democracy! Some of them have protested against the government. But only a European and democratic country respects your right to protest, your right to vote for anti-European parties. What unites all Moldovans is the will to live in peace and democracy. It is enough to turn on the television to see the destruction left by the bombardments and the tanks. What Moldovan would want to live in such a place? Neither. And the only way to keep our country in peace, safe, is with integration into democratic Europe.

“We are obligated to prepare for the worst possibilities, including military threats”

What would be the lace of Transnistria?

It is true that we have the separatist territory of Transnistria, with an illegal Russian military presence. But the situation is calm, at the moment. Hundreds of people go from one place to another in Moldova every day. I repeat: Moldovans living in Transnistria do not want to live in a war zone either. We suffer from the problem of separatism. But we seek a peaceful solution. The entire government is in contact with the authorities de facto in the region to ensure harmony. We have a deputy prime minister with that exclusive assignment. It will not be easy. But there is a mutual commitment, on both sides of the Dniester River, to move war away from our country and to manage our differences through dialogue.

It doesn’t seem like a problem that will be fixed anytime soon.

It’s hard to predict how and when we’ll fix it. It will depend on how the war ends and when. Because the war has a direct impact on the status of the talks with the Transnistrian authorities. But of course we want the reintegration and withdrawal of Russian troops illegally stationed there. And none of this affects the functioning of the Moldovan state or our European roadmap.

Do you have a clear plan to drive out the Russian troops?

What we are clear about is the objective of reaching the situation in which Russia withdraws them. And the way to achieve this will be negotiation, dialogue. Whatever we do, it will be by peaceful means, by diplomatic means. We are very committed to keeping the peace in Moldova, and the only way to reintegrate our country to resolve the eastern conflict and make the Russian troops withdraw is through diplomacy.

Yes, it won’t be easy. It hasn’t been in the last thirty years. But it is the only way we contemplate. 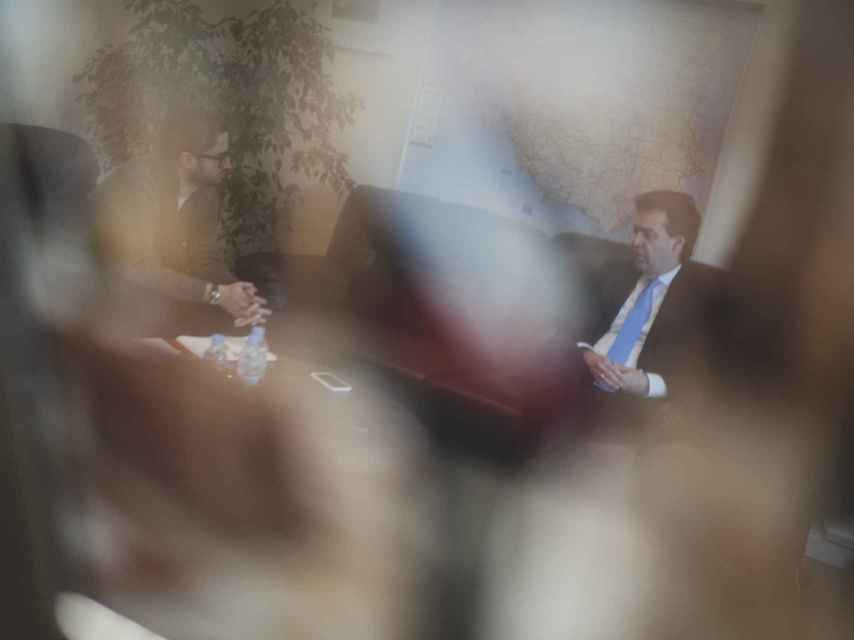 Nicu Popescu, during the interview.

You attended the NATO meeting in November. Your government no longer hides that it is considering renouncing the so-called neutrality…

It should be clarified that Moldova has a constitution that certifies the neutrality of the country since 1994. But it is evident that, at this time, a single line of the Constitution is not enough to guarantee the security of the country. That’s why we invest to improve our defensive capabilities. That is why we reach security agreements with countries and organizations that support our democracy and our freedom.

That is, NATO and the European Union.

Yes, and member to member. We have a very good relationship with Spain, we are increasingly discussing security issues. This same Tuesday I met with the Minister of Defense [Margarita Robles]. He visited us last fall. We have to realize something. The fact that neutrality is declared in the constitution does not imply that we are condemned to isolation, demilitarization and indifference in the face of brutal disregard for international law. That is why we are expanding our cooperation with those who help us keep the peace in Moldova. And that includes NATO.

How do they deal with pressure from pro-Russian elites to prevent rapprochement with the West and pro-European reforms?

The reforms are progressing. But yes, Moldova had extremely corrupt governments in the past, and we have a long legacy of oligarchs hiding in other countries who use the money extracted to continually destabilize domestic politics. Now, there are two key oligarchs who have been sanctioned by the United States and the United Kingdom. We are in talks with the EU to sanction some of the oligarchs who finance the hybrid war against Moldova. Yes, it is a reality. But we have to get over it. We have to improve our judicial system and for this we work with an international panel of recognized jurists who, in essence, are designing a more effective system against corruption.

Its Tthey are waving the streets against their government, in a country where thirty years ago there was a civil war. Are you not afraid of an internal escalation or even a coup?

I am optimistic. I think we will succeed. We will keep peace in Moldova and join the European Union. But we don’t know what the future will be like. We are required to prepare for a wide range of possibilities. Even the worst, which include military threats in our own country. We design answers. We work to face any scenario. The situation in the region is not favourable. The danger does not stop. The threats persist because of separatism. But each time we are stronger and we have the support of all of Europe, NATO, the United States, Canada, Japan…

You know Russia well. Do you have any idea how many hundreds of thousands of Russians Putin will be able to mobilize before they rise up against his government?

Will our eyes see a democratic and respectful Russia with its environment?

I have no answer.

Nicu Popescu, on the heights of Paseo de la Castellana.