Relations between Spain and Iran are not the best. The thaw stage that the then president promoted at the beginning of the 2000s is far away Jose Maria Aznarwho came to receive his counterpart on an official visit Mohamed Khatami. But nothing of what happened this Wednesday in the Royal Palace has to do with it.

If Tehran’s ambassador in Madrid did not shake hands with the Queen, it was because “it’s usual”, as confirmed by foreign sources. “Iranians are very strict against physical contact between a man and a woman.”

In fact, diplomatic sources point out that Queen Letizia fulfilled your part of the protocol, in situations like this.

Moment in which the Iranian ambassador does not shake hands with Queen Letizia.

“An authority that is aware of these circumstances is notified and stays still, does not gesture and avoids an embarrassing situation“, explains an expert to this newspaper.

“That’s what the Queen did while the ambassador put his hand to his chest and made a slight greeting gesture,” which is how these cultural clashes are resolved. “If a photo appears in Iran of the ambassador shaking hands with a woman, I’m sure they sanction him and probably stop him“.

For this reason, Foreign Affairs will not respond in any way to what some understood as a rudeness of Hassan Ghashghavi to the Queen at the official reception ceremony for the ambassadors, which took place this Wednesday in the halls of the Royal Palace.

However, sources of Ministry of Equality did come out of the incident: “It is evident that machismo exists in institutional activity and that it happens to women for the fact of being women“, points out a spokeswoman for Irene Montero’s department. “The Ministry supports all the women who are fighting for their rights in Iran and Afghanistan,” she adds.

The harsh repression that protesters in Iran have been suffering in recent months, who are protesting against the regime over the death of Masha Amini After being arrested for allegedly wearing the veil incorrectly, she is straining relations.

The Kings preside over the reception to the ambassadors in the Royal Palace.

Recently, the Minister of Foreign Affairs, Jose Manuel Albaressummoned the ambassador of the Islamic Republic “to manifest their rejection” before the execution of Alireza AkbariDeputy Minister of Defense of Iran from 2000 to 2005, precisely during the years of Khatami opening up at the head of the Government of Iran.

Although he was arrested and sentenced to death in 2019, accused of being a spy in the service of the British secret servicesAkbari was executed just two weeks ago, amid massive youth protests demanding openness to the regime.

A Foreign Affairs statement condemned his execution and called on the Iranian authorities “to put an end to executions and death sentences”a penalty that Spain rejects “in all countries of the world and in all circumstances”.

‘Messages’ to the West

However, that is not to say that relationships are broken. Not only is Ambassador Ghashghavi still in his position, but Albares himself has been maintaining bilateral contacts with his Iranian counterpart, Hosein Amir Abdolahianto demand the release of two Spanish citizens imprisoned in recent months in that country.

Is about Santiago Sanchez Fucker Y Ana Baneiraboth arrested in the context of the demonstrations over the death of Masha Amini in police custody.

The regime of the ayatollahs usually use imprisoned westerners as diplomatic bargaining chips, or even as part of their propaganda. And keeping these two Spaniards imprisoned, since October and November, respectively, tries to send a message to the West to stay out of its internal affairs.

Gone are the years when Iran’s rapprochement with the West began. With the reformist Khatami at the helm, Tehran began this path by taking its first steps in Spain. That visit, in October 2002, was about to miscarryAlso for protocol reasons. 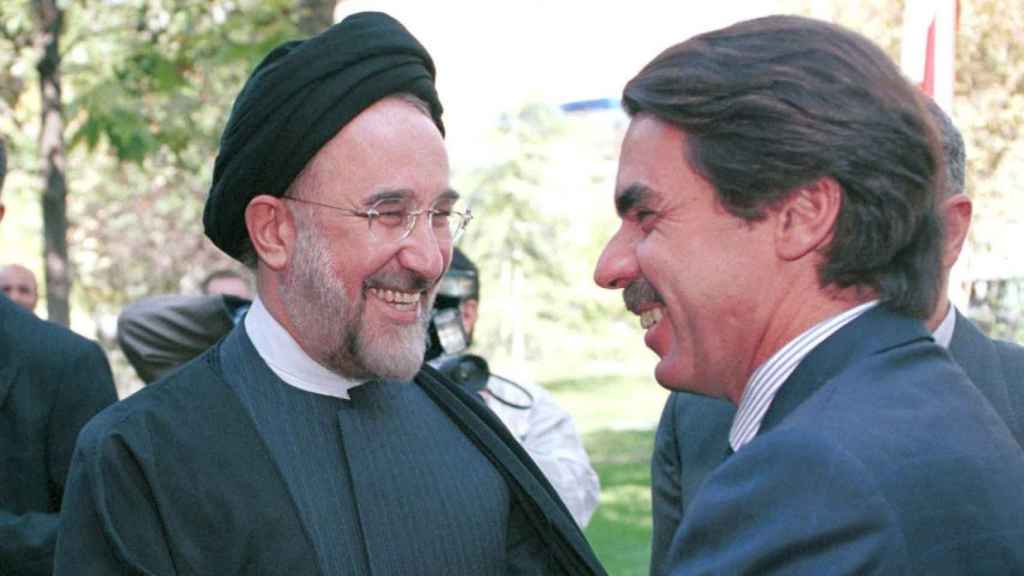 “We wanted to support the opening efforts”, recalls a senior official of that Administration, “so we could not impose all our customs.” Iranian authorities They went so far as to require that any woman present at receptions wear a veil and that the gala dinner should be held without wine.

“An Iranian cannot be sitting at a table where alcohol is served,” diplomatic sources explain. “To the first, we did not compromise… the second was arranged with a cocktail served at high tables. On the tables of the Iranian delegation there was no wine, only juices“.

From that visit to the nuclear deal between the 5+1 Group and Iran sealed in the presidency of Barack ObamaIn 2015, progress was slow but sure. then came donald trump to the White House, the most conservative clerics were reinforced in Tehran, and all trust between the parties was broken.

In fact, Foreign Minister Abdolahian threatened the EU last Sunday with taking “any type of retaliation” after the plenary session of the European Parliament demanded new sanctions against Tehran. “Iran can withdraw from the Nuclear Non-Proliferation Treaty” which, in theory, forces him not to develop atomic bombs.

Currently, the Islamic Republic of Iran is also subject to the harsh sanctions imposed by the European Union since 2012.

The flow of foreign currency, gold, precious stones and the trade in dual-use goods and technology, any exchange of goods or services that can be used in the petrochemical industry, are restricted. Also I know bans import of crude oil, petroleum products and petrochemicals from Iranas well as any investment in its petrochemical industry.

And additionally, the Foreign Affairs Council last Monday imposed more sanctions on the regime. The ministers of the Twenty-seven, meeting in Brussels, agreed on a new round of sanctions against 18 people and 19 entities responsible for Human Rights violations in Iranfor the repression by the authorities of the pro-democratic protests after the death of the young Kurdish Masha Amini.

This fourth batch of measures in response to the spiral of violence by the regime, which has persecuted protesters and sentenced several to death and executed since last September, joins Tehran’s support – not explicit, but active – to Vladimir Putin in his invasion of the Ukraine. The regime of the ayatollahs has provided the Russian Army with supplies and explosive drones, which has deepened its isolation from the international community.