The mummy had been collecting dust in the basements of the Egyptian Museum in Cairo for more than a century. In all this time no one had examined what hid her colorful anthropomorphic coffin, decorated with hieroglyphics and scenes of religious rituals. It looked like one more sarcophagus of the hundreds that are piled up in the funds of the institution. But an X-ray scan has revealed that this deceased young man from about 2,3000 years ago It is a unique example for discovering Egyptian beliefs about death and the afterlife during the Greco-Roman or Ptolemaic period.

A CT scan carried out by a team of Egyptian scientists led by sahar saleema professor of radiology at Cairo University and an expert in scanning real corpses from Ancient Egypt, has digitally ‘unwrapped’ the intact mummy, confirming that it was a teenager aged around 14 or 15 at the time of death — it has not been possible to determine the cause of it—of high socioeconomic status who was buried with a trousseau of fifty objects placed on and in the body. Baptized as “the golden boy” for the material of some of the amulets, it is already one of the attractions of the main room of the museum.

“We showed that the body of this mummy was extensively adorned with 49 beautifully decorated amulets placed along three columns between the folds of the wrappings and inside the mummy itself,” Sahar Saleem explains. “Objects include an eye of Horus, a scaraban akhet-shaped amulet representing the horizon, a placenta, or an Isis knot [esta diosa era la encargada de la protección del cuerpo momificado]. Many are made of gold and others of semi-precious stones, baked clay or faience. Its purpose was to protect the body and give it vitality in the afterlife.”

The mummified corpse with a golden mask and one of the sarcophagi that protected it.

The research results, which provide a unique insight into mummification procedures and the beliefs about the importance of tomb ornaments during the Ptolemaic period, have been published this Tuesday in the magazine Frontiers in Medicine.

The mummy of the “golden child” was found in 1916 in the Nag el-Hassay necropolis, in southern Egypt, which was used as a burial place approximately between 332 and 30 BC. It was protected by two coffins: an outer one with a Greek inscription and another interior made of wood. One of the most striking elements is undoubtedly the golden mask that covered the head. During the mummification process, the young man’s viscera were removed through an incision and the brain through the nose, later replaced by resin. Finally, his torso was covered with cardboard and two sandals were placed on him.

“They were probably meant to help the boy out of the coffin. According to the ritual of the Book of the Dead of the ancient Egyptians, the deceased had to wear white sandals to be pious and pure before reading his verses,” says Saleem, one of the main collaborators of the popular Egyptologist Zahi Hawass. A beetle was also placed inside the chest cavity. This object was important in Egyptian rituals because they believed that it prevented this organ from declaring against the deceased in the ceremony of weighing the heart, on the day of judgment, as explained in the text itself. Book of the Dead. 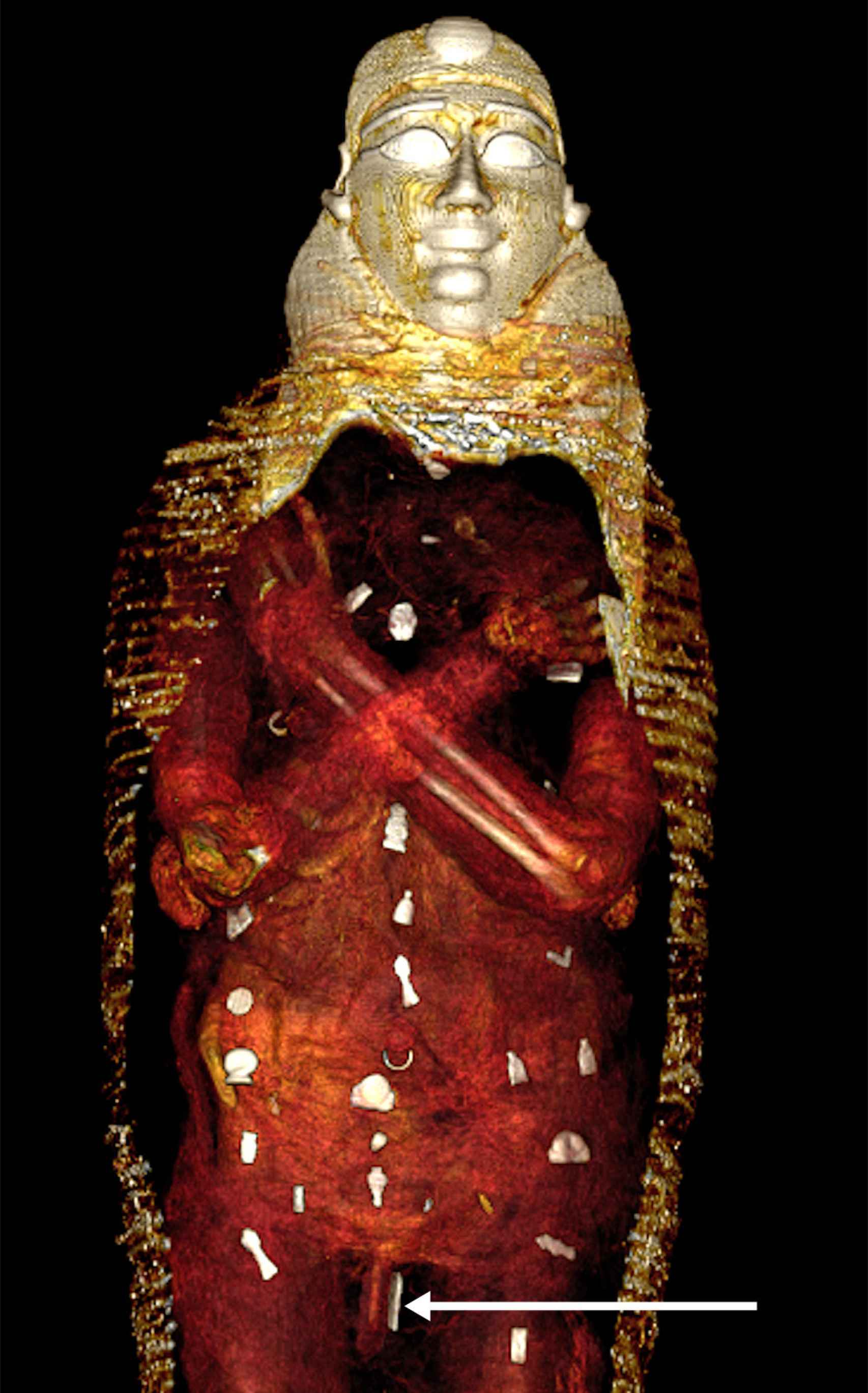 Distribution of objects in the body of the mummy.

Computed tomography has revealed that the young man measured 1.28 meters, had not been circumcised – one of the amulets was placed next to the penis – and his age has been determined, among other things, thanks to the degree of bone fusion and unerupted wisdom teeth. His teeth were in good condition and showed no evidence of decay. To ensure that the deceased could speak in the afterlife, a golden tongue was placed in his mouth.

Finally, several ferns were also deposited on the mummy. “The ancient Egyptians were fascinated by plants and flowers and they believed that they had sacred and symbolic effects”, details Saleem. In some of the royal mummies of the New Kingdom, such as those of Ahmose, Amenhotep I or Ramses II, offerings of bouquets have been found, which could also be left during visits to the graves during some celebration.