I want to Sell this domain contact at [email protected]
“Such stories were, are and will be”: how tennis players react to the aggressive behavior of spectators at the Australian Open | Then24
Skip to content

Many tennis players had to deal with the aggressive and offensive behavior of the audience during the first week of the Australian Open. Among those who were interfered with by the fans are the Russians Andrei Rublev and Karen Khachanov, the Serb Novak Djokovic, and the Australian Tanasi Kokkinakis. Provocative behavior can influence the course of matches, but it is impossible to prevent it, says Olympic champion Yevgeny Kafelnikov. Moreover, some players even like the negative mood of the public, Olga Morozova, a two-time Grand Slam finalist, is sure.

The current Australian Open was rich in scandalous behavior of the fans. Spectators increasingly began to behave aggressively, defiantly disregarding the rules of conduct adopted in tennis. Without a doubt, they have shown emotions at Grand Slam tournaments before, but tennis players often provoked them themselves, as, for example, Daniil Medvedev did at the US Open in 2019.

In general, as you know, athletes are extremely sensitive to extraneous noise and movement, so the judges on the tower urge the audience to keep quiet not only before the rallies, but also before the second serve. The audience mostly behaves correctly, but still, it sometimes happens that obscene words begin to be shouted at the players from the stands.

Retribution for Medvedev: how Khachanov defeated Korda on refusal and reached the semi-finals of the Australian Open

Karen Khachanov won the fifth consecutive victory at the Australian Open. In a match with American Sebastian Korda…

On one of the days of the tournament in Melbourne, Andrei Rublev and Novak Djokovic faced this. During the meeting between the Russian and Finn Emil Ruusuvuori, a couple of spectators unfurled the Ukrainian flag on the podium and began to practice the originality of swearing. The tennis player turned to the judge on the tower and asked to make a remark to the fans who insulted him. The referee clarified whether the flag interferes with him, however, the athlete assured that there are no problems with the flag, he just does not want to hear nasty things addressed to him.

“I don’t understand why the Ukrainian flag should be unfurled at the match between the Russian and the Finn. In my opinion, the fans thus commit a provocation. You need to understand that these people do not come to tennis, but to sort out political relations. I just sympathize with these characters. They did everything to attract the attention of Rublev and prevent him from playing. On the one hand, being on the court, it is difficult not to notice this. On the other hand, the same Daniil Medvedev admitted that the hatred from the fans additionally turns him on and he has a desire to prove that he is better, ”commented the well-known tennis player Andrei Chesnokov in an interview with RT.

Nine-time tournament champion Novak Djokovic also had to deal with inadequate fans during a meeting with Enzo Cuaco. For almost two hours of the match, he listened to abominations from one of the fans, and finally, unable to stand it, demanded that the referee take action. The young man was eventually taken out of the stadium.

As the athlete emphasized at the post-match press conference, he is calm about the fact that not all spectators in the stands sympathize with him, but he is not ready to put up with incessant abuse.

“What I don’t like is when someone goes too far, and more than once. From the very beginning, several guys who were in a state of intoxication, it was obvious, were sitting next to the place where my towel lay. In particular, one of them – today you have repeatedly heard his voice – insulted and provoked me, said completely disrespectful things, ”Djokovic explained.

He also lamented the lack of any response from officials until he complained to the referee.

“I gave signals to the referee on the tower, looked at him, then at that guy. It seems to me that the supervisor – or whoever is responsible for interacting with the audience there – should have made a little more effort and foresaw that I would go up to the arbitrator and look like some kind of villain – and this is exactly how I will now look like for the media, and for the public, because I am the person who kicked out some guy, ”said the tennis player.

Another victim of inappropriate shouting was Thanasi Kokkinakis, who ran a nearly five-hour marathon with Andy Murray in the second round match. At some point, the Aussie received a warning from the tower referee for taking too long to serve, although, as Tanasi tried to explain, he was simply trying to wait for one of the rowdy fans to calm down. 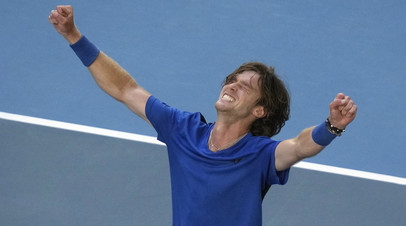 “Shocked and happy”: Rublev reached the quarterfinals of the Australian Open, losing 0:5 in a tie-break in the fifth game

Andrey Rublev made it to the quarterfinals of the Australian Open for the second time in his career, defeating Holger Rune in five games. Along the way…

Karen Khachanov was even less fortunate, who had to fight not only with Francis Tiafoe, but also with the stands. The fans were too active in expressing their antipathy towards the Russian tennis player, booing almost his every action and rejoicing at any mistake. In the fourth set, the 20th racket of the world also asked the referee to calm the audience.

“Ref, tell them. You can get sick, not a problem at all. But show some respect,” Khachanov said as the fans screamed between his first and second innings.

If inappropriate fan behavior becomes a serious problem, then perhaps the organizers of major tournaments should tighten the rules and punishment for brawlers. In the meantime, it looks extremely unfair that the AO decided to impose serious sanctions not on them, but on fans with the Russian flag, who behave as correctly as possible.

As you know, Tennis Australia banned the tricolor from being carried into the stands after Ukrainian Ambassador Vasily Miroshnichenko was outraged by his presence at the match between Kamilla Rakhimova and Katerina Beindl. The main character of this story was the Australian Eugene Rothman, who was born in Moscow and has been supporting Russian tennis players at the AO for many years. Despite the ban, he decided to celebrate the victory of Daniil Medvedev in the second round of the competition also with the Russian flag in his hands, for which he paid the price. Not only was his cloth confiscated in a matter of seconds, but they were also banned from entering the tournament for a day, although his act did not cause any inconvenience to the players.

Olympic champion Yevgeny Kafelnikov is sure that the organizers are unlikely to tighten the rules for haters, the maximum that threatens them is a short-term ban on attending matches. Moreover, he believes that it is practically impossible to prevent such situations.

“This is a sport, and sooner or later everyone faces aggression in one form or another. Someone has an iron will, but even if not, you should not pay attention, continue to play. Personally, I have never come across this, but in general, such stories have been, are and will be. Despite the fact that there has always been a more intelligent audience in tennis, we will certainly see this, ”Kafelnikov said in an interview with RT.

In turn, Wimbledon and Roland Garros finalist Olga Morozova believes that some tennis players even benefit from the negative attitude of the public. According to her, players like Nick Kyrgios deliberately provoke the audience to emotions, but at the same time they also have their own army of millions of fans. In addition, as the specialist noted, among the athletes there are both favorites of the public like Roger Federer, and those who do not enjoy special favor, such as Djokovic.

“When a tennis player is on the court, he is, as it were, in a glass flask that protects him. And if the game is going great, and you are in good shape, this behavior of the audience does not get on your nerves too much. Of course, it is more pleasant when you are supported, but even here everyone has their own preferences. I liked it when they rooted against me, ”Morozova admitted in an interview with RT.

Another thing is also interesting: the closer the tournament is to the denouement, the more adequate the behavior of the public becomes, although there are fewer and fewer empty seats on the center court. Leaving aside reflections on the ideal work of the security services, one might get the impression that the audience pays tribute to those who have already coped with the pressure and are ready to please them with a beautiful game, forgetting about their addictions.

Russian and Belarusian tennis fans, whose representatives are storming the singles, should be doubly pleased: the fans were imbued with respect for Karen Khachanov, Andrei Rublev, Victoria Azarenka and Arina Sobolenko, as well as Elena Rybakina, a Muscovite playing for Kazakhstan, and they will empathize with them in case of victories and defeats without looking back at the flag and anthem, which once again confirms the idea that sport should remain out of politics.