How does the Latin American food ranking work?

As detailed by the exquisite site, the methodology for rating the best meals in Latin America is as follows: “Visitors rate dishes, drinks, and ingredients, not cooks. We don’t rate anything; we just add and divide the scores of our users.”

Then, TasteAtlas details: “Our algorithm takes the average of the valid votes for all the highest-rated dishes from each cuisine and compiles the list.”

In what position of the Latin American food ranking does Argentina appear?

With a score of 4.53, he leads the podium Mexico. From there, five dishes stand out that they consider iconic: Tacos, Carnitas, Quesadilla, Pozole and Tortas. Among its products, Oaxaca cheese, Chihuahua cheese, Jalapeños, Tequila and Mezcal stand out. 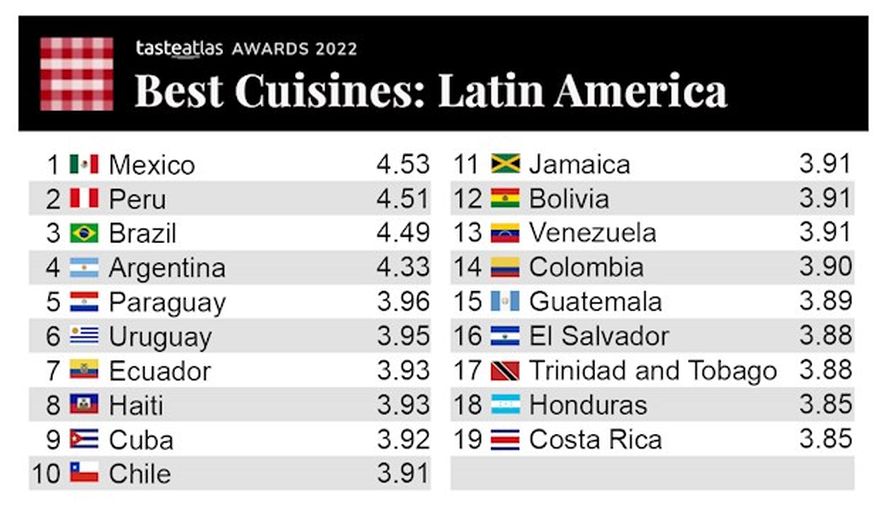 In second place is Peru with 4.51 points, which counts among its best meals with: Grilled chicken, Butifarra, Ceviche, Lomo saltado and Aji de gallina. While its best products are: Ají amarillo, Chica Morada, Ají Panca, Pisco and Mate de Coca.

In third place in the ranking of the World Food Atlas is Brazil with 4.49 points. Favorite dishes from the neighboring country are Churrasco, Escondidinho, Coxinha, Moqueca and the classic Feijoada. Among its iconic products are: Canastra, Caipirinha, Queijo de Coalho, Quentão and Cachaça.

In fourth place is the Argentina with 4.33 points and among the favorite and best scored dishes are clearly the roast, the choripán, the milanesa, the alfajor and the loin sandwich. As expected, among the products that visitors enjoyed the most were Argentine meat, Argentine Malbec, provoleta, Amargo Obrero and mate.

In fifth place is the neighboring country Paraguayan with 3.96 points. Among the five outstanding dishes are: Bori-bori, Chipa guasu, Pastel mandi’o, Mbeju and Paraguayan soup.