I want to Sell this domain contact at [email protected]
Missed chance: why Scotland was denied the right to hold a new independence referendum | Then24
Skip to content

The decision of the UK Supreme Court that Scotland cannot hold an independence referendum without the consent of London, only underlines the need for such a vote. This was stated by Scottish First Minister Nicola Sturgeon. According to her, the court decision exposes the myth of the United Kingdom as a voluntary partnership of its constituent regions. Experts note that Scotland missed its chance to become independent in 2014 and is now unlikely to get a new referendum in the foreseeable future, despite Edinburgh’s arguments about the changed state of affairs after Brexit.

The decision of the UK Supreme Court, which ruled that Scotland could not hold a new independence referendum on its own, only underscores the need for such a vote. This statement was made by the First Minister of Scotland, Nicola Sturgeon.

“A law preventing Scotland from determining its own future without the consent of the UK Parliament demonstrates the false nature of any notion that the United Kingdom is a voluntary partnership (its administrative-political parts. — RT), and is an argument in favor of a referendum. Scottish democracy cannot be brushed aside. Today’s court ruling cuts off one opportunity to hear Scotland’s views on independence, but in a democracy our voice cannot and will not be silenced,” she tweeted.

The day before, the British Supreme Court banned the Scottish authorities from holding a new independence referendum. Chief Justice Robert Reed rejected the Scottish government’s arguments and said it would be illegal to organize a vote without British government approval.

Recall that in 1998 the British Parliament passed the Scotland Act. This law gave the once independent kingdom, which became part of Great Britain in 1707, autonomy and the right to create its own parliament and government. However, the Scots did not receive the right to independently hold referendums on independence – this issue remained in the sphere of London’s powers.

Edinburgh won the right to hold such a referendum in 2014. However, then about 55% of those who voted were in favor of keeping Scotland as part of the United Kingdom.

However, after in 2016 the majority of British citizens voted for the country’s exit from the European Union, the leadership of Scotland began to speak more and more actively in favor of holding a new plebiscite on the issue of independence.

In 2019, Nicola Sturgeon, who is also the leader of the Scottish National Party, sent a request to the UK government demanding that she be given the authority to hold a new referendum. 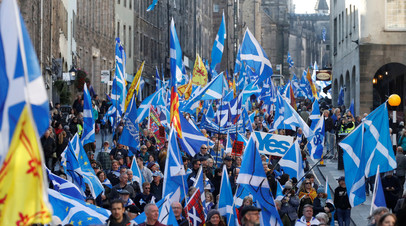 “They can decide on extreme measures”: how Scotland intends to once again seek independence from London

Then Prime Minister Boris Johnson categorically refused to do this, publishing an open letter to Sturgeon.

“I cannot agree to such a request for a transfer of power that would lead to further referendums on independence,” Johnson emphasized.

He recalled the results of the 2014 vote, when the majority of the Scots expressed their desire to keep their country part of the UK. He also recalled the promise made by the Scottish government at the time that the 2014 independence vote would be a ‘once in a generation’ event.

Once again, Sturgeon tried to initiate a new referendum on secession from the UK already under the government of Liz Truss. It is worth noting that Truss also opposed giving Edinburgh another chance to gain independence from London.

The main argument of Nicola Sturgeon and the Scottish National Party in favor of a new referendum remains Brexit and its consequences.

So, back in 2016, Sturgeon said that the popular vote for the UK to leave the EU gives the Scots the right to reconsider their decision to keep the country within the United Kingdom. 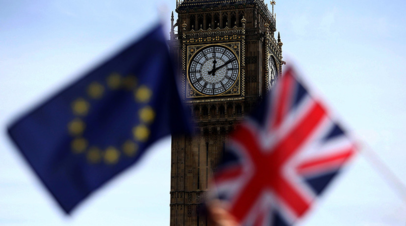 Time is running out: why the UK and the EU cannot agree on a trade deal after Brexit

“The context and circumstances have changed dramatically. The UK, which Scotland voted to retain in 2014, no longer exists,” she explained.

It is worth noting that the majority of the people of Scotland in 2016 voted against the country’s exit from the European Union.

Sturgeon referred to “a UK exit that we didn’t vote for” this summer when she announced her intention to push for a new independence referendum.

“Brexit tore us out of the European Union and the single market against our will, causing enormous damage to trade, living standards and public services,” she stressed in her address.

The Conservative Party, which dominates the British Parliament, as well as Rishi Sunak, who has taken the post of Prime Minister, are unlikely to give the Scottish authorities the opportunity to hold a new vote on independence, said Lyudmila Babynina, head of the Center for Political Integration at the Institute of Europe of the Russian Academy of Sciences.

“Rishi Sunak is unlikely to agree to this, as is the Conservative Party. Of course, the UK’s exit from the EU was a game-changer in some ways, as Sturgeon points out, but it’s about domestic politics and the country’s unity. Therefore, the refusal of the British government can be understood, ”the expert said in a commentary to RT.

At the same time, supporters of Scottish independence do not take into account how difficult it will be to secession from the UK, even if they suddenly manage to hold a new referendum and win, Babynina stressed.

“Supporters of independence lost in 2014 precisely because all state-economic issues related to currency, border protection, the army, and so on were not worked out. They still remain problematic, moreover, the subsequent entry of hypothetically independent Scotland into the EU remains problematic, because there must be unanimous decisions of all member states of the association, and, for example, Spain does not support such referendums, ”said the political scientist. 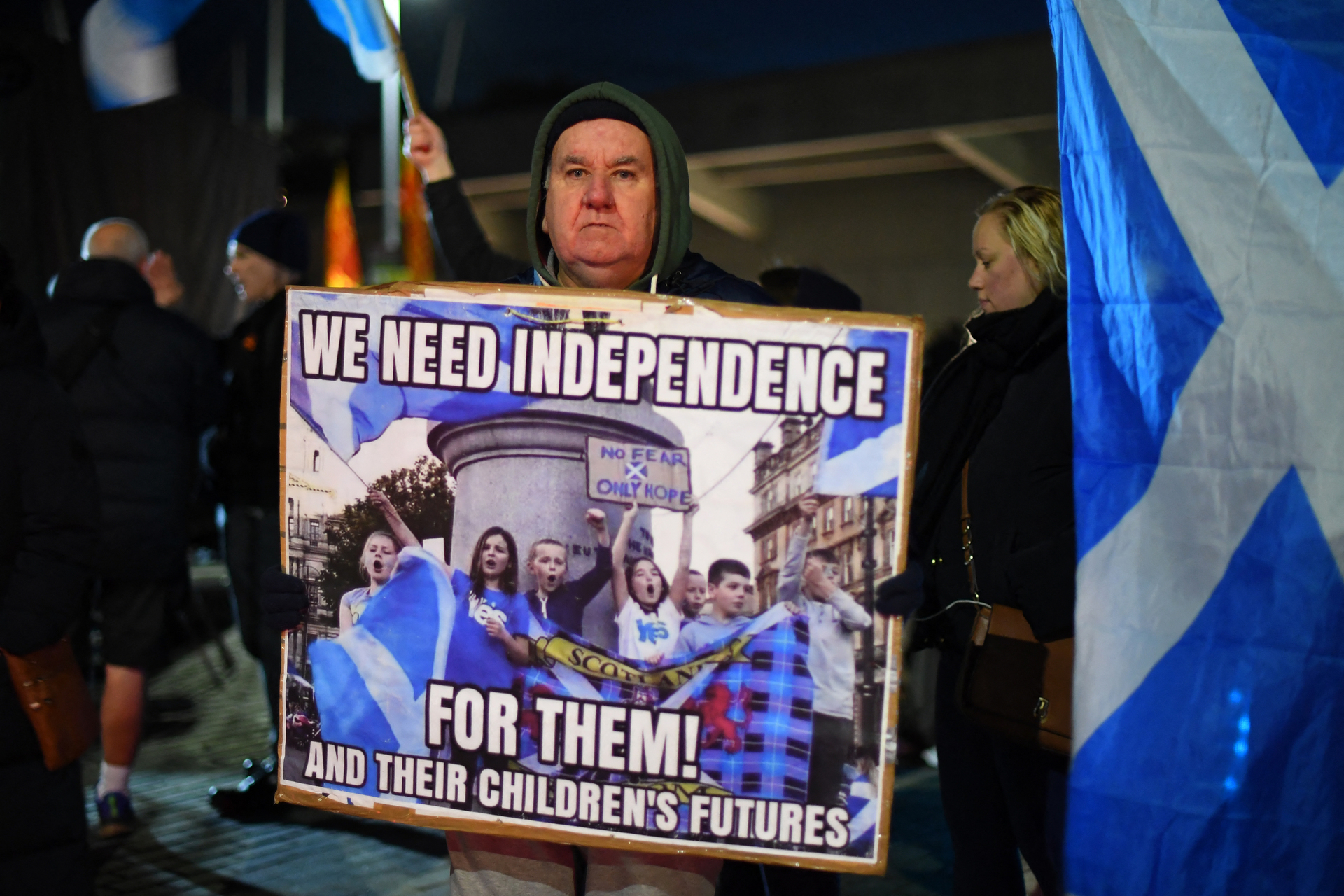 As Vladimir Schweitzer, head of the department of social and political research at the Institute of Europe of the Russian Academy of Sciences, noted in an interview with RT, after the decision of the Supreme Court for the next few years, the issue of Scottish independence can be considered closed.

The Scots made their choice in the 2014 independence referendum, he said, and their position on Brexit does not override it.

“This does not give Edinburgh any separate reason to demand independence from Great Britain. Linking the issue of a new referendum to the potential membership of an independent Scotland in the European Union is generally absurd. Any such initiative will immediately be blocked by Spain, which in 2017 severely suppressed the Catalans demanding independence. Also in the EU there are countries of the Western Balkans, which have been waiting for their admission to the union for decades. There is Turkey, and now Ukraine. Nobody expects Scotland there, ”said the political scientist.

In addition, Europe will react very painfully to new attempts by the regions of various countries to gain independence in the context of what is happening in Ukraine, Schweitzer added.

“The noise that the Scottish National Party is making will not lead to anything. Now it is impossible to implement it politically, economically, in whatever way. The British government will not agree to such a split, and Scotland does not have good arguments in favor of just taking it, breaking with London and joining the EU, ”the expert concluded.