It is not unprecedented, but it is still a factor of increased interest. When this afternoon, at 4pm, Portugal takes the field, the captain’s armband is being worn by a player without a club. It happened in 2014 with Frank Lampard, then captain of the England team, it will happen today with Cristiano Ronaldo. The main difference is that we are now talking about one of the best, if not the best, football player in the world. And also from a brand valued at 200 million euros.

That is, between salaries, advertising contracts, image rights, commercial agreements or earnings on social networks, these are the revenues generated annually by Cristiano Ronaldo, lists Daniel Sá, for whom the captain of the national team has two powerful attributes. On the one hand, his global visibility. On the other hand, “his strong, winning personality and a success machine that knows how to deal with all kinds of pressure. All this in an athlete with enormous collective and individual sporting success consistently for over 20 years”.

And “all kinds of pressure” is what the 37-year-old has not lacked, until this Tuesday, a Manchester United player. Just go back a week. On the 17th, the first part of the interview with journalist Piers Morgan is broadcast, in which he harshly criticized the English club and its coach, Erik ten Hag. The interview, broadcast in Portugal by RTP1, was followed by more than 1.6 million Portuguese people, being the second most watched program of the day, only surpassed by the Portuguese team’s preparation game for the World Cup. On average, over the two days, one million and 365 thousand Portuguese watched the interview, according to data from Universal McCann cited by Lusa. On the eve, the 16th, it was the Footballverse film, created by Nike for the World Cup, that began to travel the world, with Ronaldo as one of the protagonists.

A day later, Friday, Turismo de Portugal took over an hour of the entire advertising space in Time Square, thus activating the Close to US campaign, initially launched in 2020 and suspended due to the pandemic. The evening star? Cristiano Ronaldo, in video format, speaking directly to Americans – that is to say the world – and announcing his new wax statue, on its way to Madame Tussauds Museum in New York. Point for Portugal, whose action went around the world, point for the captain of the national team.

A day later, Saturday, a post on Instagram. “Victory is a state of mind”, said Cristiano Ronal and Lionel Messi at the same time, in a production signed by the North American Anna-Lou Leibovitz for the French brand Louis Vuitton, which joined the two rivals for a game of chess. This Wednesday the post surpassed 39 million likes and 492 thousand comments, Messi had 29.9 million reactions and 326 thousand comments. What seemed like a perfect campaign lost part of its charm – and all of its authenticity – when the brand released the making of the ad, in which it was clear that, after all, Ronaldo and Messi were only in the photomontage together. But a prominent place in the ranking of the most viral campaigns of 2022 is already assured. 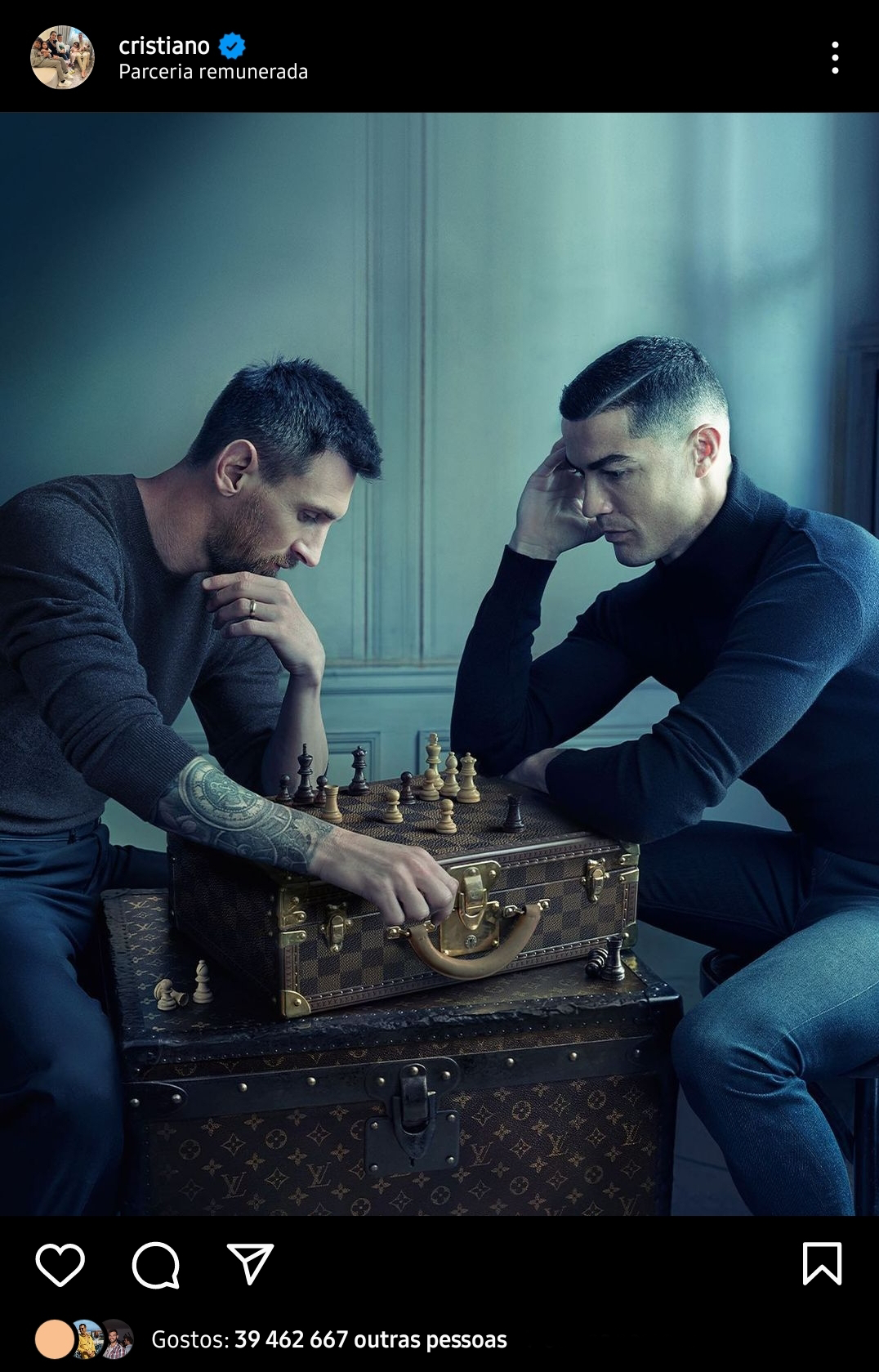 On Monday, a new record, with the captain of the national team becoming the first person to surpass the mark of 500 million followers on Instagram. A week earlier, a release: the NFT Cristiano Ronaldo, in partnership with Binance.

Already this Tuesday, the expected outcome with the club. Cristiano Ronaldo has left Manchester United after termination by mutual agreement with immediate effect. “The club thanks him for his immense contribution in two spells at Old Trafford, scoring 145 goals in 346 matches, and wishes him and his family the best for the future”, wrote Manchester United, in a short note published on their website. . Ronaldo enters the field as the most valuable free agent on the market, with the specialist website Transfermarkt assigning him a market value of 20 million euros.

“The ‘timing is always the timing. It’s easy for you to opine, write. I don’t have to think about what others think”, said Ronaldo on Monday, at the selection’s press conference, at the training center of Al-Shahaniya SC, on the outskirts of Doha, guaranteeing that all the controversy surrounding his name “ will not influence the performance of the selection and will not be influenced by what others say or write”.

The uplift that Cristiano manages to offer to products, brands and services through the channels in which he has a digital presence is tremendously valued. Compared to Messi, he achieves up to 1.25X better user interactions on branded content”, Francisco Morgado Véstia, Samy Alliance.

And was the value of the Ronaldo brand influenced? “These are facts that build on the persona and myth of the greatest footballer in the world. Let’s see, we followed Cristiano since he was young when he played for Sporting, and the world began to realize who this athlete was in 2003, aged 18, when he signed for Manchester. It’s almost 20 years of a story that had several stages, and this narrative is not just associated with sporting results”, begins by saying Francisco Morgado Véstia, country manager of the Samy Alliance, a group that includes, among others, the influencer marketing agency SamyRoad. “Assertiveness and a certain hunger to win at all costs are also associated with him, and this was well demonstrated in the interview”, he continues.

Will it be all right? “Cristiano is far from being a consensual figure. Even if the results and sporting honors on a personal and collective basis may clear up some doubts, the truth is that being a person with a public life that has lasted for over 20 years, he is not exempt from controversy. It would be impossible otherwise. But does that stop Cristiano Ronaldo from being one of the most famous people in the world? Of being one of the profiles with the largest personal digital presence in the world? Is it no longer the figure with the largest number of followers in the world on Instagram?”, reinforces the official, who points out the Portuguese as “one of the 10 biggest sports brands in the world”.

In July of this year, Capture Intelligence from the SAMY Alliance conducted a study of social listening on the Cristiano Ronaldo brand and profile in July 2022. “The uplift that Cristiano is able to offer to products, brands and services through the channels in which he has a digital presence is tremendously valued. For Clear (Linic) we estimate that it has achieved over 90 million organic views in its own content. Compared to Messi, he achieves results up to 1.25X better in interactions with users in content with a brand presence”, Francisco Morgado Véstia tells +M/ECO.

“If we had to write Ronaldo’s biography in a 500-page book, the episodes of the last few weeks wouldn’t occupy more than three or four pages”, believes Daniel Sá. “Obviously, we are facing the lowest period of Ronaldo’s career, but it is a combination of factors that naturally negatively affects the Ronaldo brand. However, the remaining 20 years of consistent success overshadow these tougher weeks. The brand will continue to grow for many years to come, even after Ronaldo retires as a football player”, argues the specialist in sports marketing.

The remaining 20 years of consistent success roll over these tougher weeks. The brand will continue to grow for many years to come, even after Ronaldo retires from the field”, Daniel Sa, IPAM.

And is having Ronaldo as a brand ambassador still a good deal? “It obviously depends on what is invested for it, the scope of the agreement, the territorial dimension of the presence and accuracy with the product, service or message. At the outset, with investment and financial availability to take this agreement to the last consequences, all the data we have indicates yes”, replies Francisco Morgado Véstia.

“It’s an excellent deal and will continue to be so”, guarantees the director of IPAM unreservedly. “It is a globally recognized personality with a continuous presence in the media, in addition to being the brand with the most reach on social networks worldwide. In addition to visibility, CR7 is accompanied by a strong and very attractive personality for brands”, defends Daniel Sá.

As for the type of products and services that Ronaldo can “lend” the brand to, the two professionals are almost unanimous. The versatility of Portuguese is another of its characteristics, as evidenced by its associations with sports performance products, telecommunications, banking, cosmetics or the recent collaboration with Binance. Ronaldo makes sense for all types of industries, as long as they have a global reach, says Daniel Sá. “CR7, given its size, only makes sense for mass brands that have a truly global presence. I would also say that it is a brand premium because he is one of the best players in the history of world football, in addition to being the most influential sportsman alive” adds the teacher.

In connection with the brands it represents, says Francisco Morgado Véstia, the numbers leave little room for doubt. “According to our study, the brands associated with Cristiano Ronaldo achieve an uplift in interactions of more than 7.5% of the brand average when communicating alone. The numbers are undeniable and are deeply expressive of the enormity of the profile”, he reveals.

In the last World Cup of his career, as he admitted in an interview with Piers Morgan, at stake will be his sporting performance, but also his destiny in terms of the club. “All the spotlight is on him. There is enormous expectation about his performance, but also about any statement that may exist that gives some indication of the next steps in his career, “says Francisco Morgado Véstia. Will the selection path impact its value? “Everything impacts of course. From a poor presence to winning the World Cup and a rain of goals can positively or negatively influence Ronaldo’s brand in the short term”, replies Daniel Sá. Moreover, “the remaining 20 years of a top career have already ensured that the brand is part of a very restricted elite worldwide”. The ball starts rolling at 4pm.