Netflix’s ‘Pinocchio by Guillermo del Toro’, premiering on November 25, an authentic gem in stop-motion animation that ltakes the work of Carlo Collodi into the familiar territory of the horrors of the director’s war, being almost a spiritual sequel to his works in Spain. Curiously, it arrives in the same year as Robert Zemeckis’ bland “live-action” remake for Disney, a coincidence in time that exposes the corporate laziness of those updates.

And it is that each plane of this new version shows that it is a project longed for years by Guillermo del Toro, which has been on the platform for a full year after the premiere of the exceptional horror anthology ‘The Cabinet of Curiosities’. The production is taken care of in detail and the care in every aspect of finishing, artistic direction, lighting or staging is so evident that it seems like one of Laika’s productions, so much so that it should win the Oscar for best animated film in 2022. without contemplation.

Although as the producer of ‘Kubo’, surely she is ignored to give her the usual prize to pay the mortgage to Disney. ‘Pinocchio by Guillermo del Toro’ —if this title serves to put the name of the Mexican to differentiate it from that of Zemeckis, it is quite fair— is, without a doubt, the best film version since 1941, with the exception of the 1972 Italian miniseries that came close to the paper work almost literally. But what makes this adaptation special is that it is a 100% film by its director.

Childhood and imagination according to GDT

It is not a whim sought by del Toro for free, since many of his monstrous obsessions coexist in the story itself, from Mary Shelley to Hoffmann, but also the stop-motion format organically pushes the nods to Harryhausen in the designs of their fantastic appearances, it is no coincidence that some remind us of griffins and centaurs from classics such as ‘Sinbad’s Fantastic Journey‘ (The Golden Voyage of Sinbad, 1973).

Once again, another temporal coincidence is striking, since two years ago we had Matteo Garrone’s ‘Pinocchio’, which faithfully portrayed the cruelty of Collodi’s work in the style of Italian neorealism reimagined by Terry Gilliam, between the dark fairy tale of ‘The storyteller’ (1988) and the visit to the haunting valley, without putting barriers to the most moving beauty. the Netflix converges with that wonderful version by locating the story in fascist Italymixing not a few of the same elements in different ways. 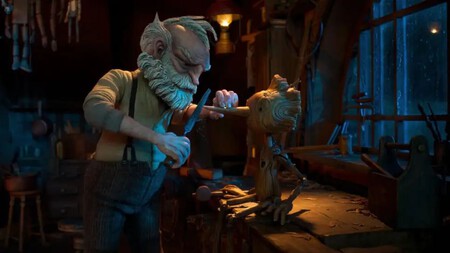 The difference, in addition to the animation, is that Del Toro takes it to his field and seems a kinder response to his vision of the Spain of the Civil War in ‘The Devil’s Backbone’ (2001) with various communicating vessels, between magical realism, religious influence, and the stamp of falling bombs. But it also has many points in common with ‘Pan’s Labyrinth’, from the design of its fantastic beings to the contrast of fantasy and the harshness of the reality of the war in a Mediterranean country under the command of the fascists, even with its similar patriotic villain.

A Jiminy cricket living in a wooden heart

But they are not the only references to his filmography. All the creatures in ‘Pinocchio’ have designs, like those eyes on the wings of the “good fairy” that make them directly related to other beings like the angel from ‘Hellboy II’, cementing their own universe that makes more sense with this film. what achieves condense their imaginary in a coherent balance with their most recent discourse. As in ‘Scary Stories to Tell in the Dark, 2019) or ‘Nightmare Alley, 2021’, it places great emphasis on lies as a tool of perfidy .

There is no better package for that idea than a story about a child whose nose grows when he lies, but it is also that Del Toro makes a claim to the power of innocence. defining a Pinocchio that is pure childish expressivenesswith his explosions of almost animal sincerity that he directs towards responsible parenthood, about tightening the screws only what is necessary, understanding the dilemma of education as something complex, multidimensional and full of contrasts, like those expressed in his cinema. 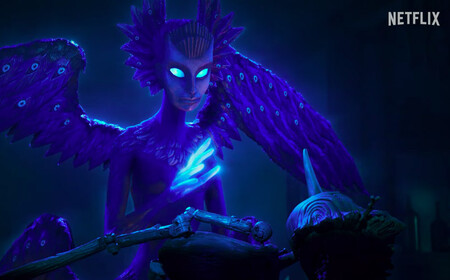 Here, Del Toro is capable of combining the darkest —some moments are pure horror movies— with the most tender, without fear of the corny, including pure and naked songs, and showing sadness, fear and acceptance at the same time. facing death, respecting the key passages of the original work, but substituting the world of sweets for a very tough military segment. ‘Pinocchio’ is an explosion of creativity and imagination, probably the most sincere and emotional work of Guillermo del Toroone of his best films, and within a filmography like his, it is not a small thing to say.