Hectic. It is the first thing that occurs to me to define the online multiplayer mode of ‘Call of Duty: Modern Warfare II‘. The last installment of a legendary saga had a worrying reception in its campaign mode, so many expected (we hoped) to see if the online mode would change those feelings.

For me, it certainly does. As a frequent player of the rival ‘Battlefield’ saga, I was very curious to see what ‘CoD: MWII’ could offer, and the truth is that its multiplayer modes are a dizzying delight. Let’s see why.

Modes for all tastes

In ‘Call of Duty: Modern Warfare II’ —not to be confused with the 2009 title— we have nothing less than twelve multiplayer modes. The vast majority of them are 6v6 modes (6v6, the so-called modes on main maps), while “Land War” and “Land War (Invasion)” are the most ambitious in terms of player numbers and reach 20v20 and 32v32 players respectively.

Several of them are old acquaintances of the franchise. They are “Verse-all” (whoever gets 30 kills wins), “Team Showdown” (get 75 kills with your group), “Dominance” (control of three marked zones), “Hotspot” (capture and defend hotspots), “Headquarters” (seize and defend it without respawns), “Search and Destroy” (turns to defend or destroy an objective), and “Control” (turns to attack and defend objectives with time rewards).

but we also have news. The first is “Prisoner Rescue”, a mode in which we will have to locate and rescue the hostages, or avoid just that, without respawns but with team revives. The second, “Knockout”, in which the teams compete for a bag of money, and in which there are no comebacks either, but there are resuscitations.

The modes on battle maps (up to 32c32) are two. The first, “Ground War,” pits two teams against each other to capture an odd number of objectives, and is essentially an oversized version of “Dominion” that includes vehicles. 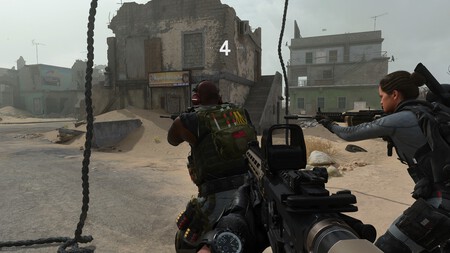 The second, “Invasion” pits the two teams against each other to achieve as many kills as possible, but here human players are mixed with players controlled by the game’s AI. That can be a drawback for experienced players —bots are lazy, really— but it can also be a good gateway for new players, so they can not feel so frustrated.

Here we must also mention the ‘matchmaking’ system of ‘Modern Warfare II’, called Skill-Based MatchMaking (SBMM). I found it curious but probably reasonable: that system tends to make each game different from the last: you can feel like Rambo or John Wick in one game and then look like an absolute disaster and not see them coming the next.

These sensations become less pronounced over time, precisely because the system is fine-tuning more by putting you with players with a similar level who can pose a challenge without you ending up saying “See I’m a pack, I’m quitting“. They reward and punish you in equal parts, which is crucial so that as soon as the game is over you really want to start a new one (something the game does without asking). 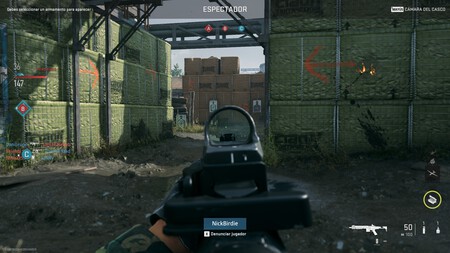 Playing the various ‘Battlefields’ I would normally jump right into the big Conquest multiplayer modes where you go up to 64v64, but the truth is that the 6v6 modes in Call of Duty have been fantastic. Much more frantic and dizzyingThey reminded me of those old days when Quake was king and everything happened at a devilish speed.

The same thing happens with these modes. There’s almost no time to breathe and the tension is constant: one has the feeling of not being able to take a short break in some corner.

Here, as always, seeing the enemy first is synonymous with being able to eliminate him, and the speed of the game and the size of the maps —which we’ll talk about later— make it difficult for the controversial camperos can be successful with that strategy, at least on 6v6 maps. Things change on the big maps and modes like Invasion, where this type of player can do more of his particular August.

I particularly liked the two new modes “Prisoner Rescue” and “Knock Out”. Although they are two variations of the same idea, I like that once you are eliminated there are no respawns and you can only continue playing if a teammate revives you. If no one does it, nothing happens, because I assure you: games last a breath and then you’re back in action. 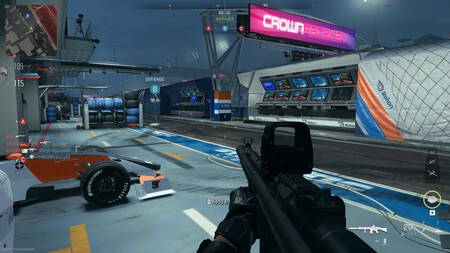 The rest of the 6v6 modes are also fun, and one can filter which ones one prefers from the initial menu, but there have also been complaints due to the absence of modes from previous installments that were highly appreciated and that were also interesting due to confrontations between individual players (1v1), pairs of players (2v2) or trios (3v3). For example Gunfight or the Champion Hill mode from ‘Call of Duty: Vanguard’ are currently not in MW II.

In the modes with more players, the game bears similarities to the ‘Battlefields’ that have always boasted of that “total war” that put you at the controls of all kinds of vehicles, unfair as that might be for the rest of the players. In ‘Modern Warfare II’ it is easy to get killed by a drone, a helicopter or a reactor which you will hardly be able to deal with with your submachine gun.

In all these modes the importance of the maps is obvious, and here I have found those three-lane maps that arrived with Black Ops and that contribute to a (again) dizzying action in which once after others do not stop coming across enemies. Controlling everything and not leaving blind spots is virtually impossible, but therein lies the beauty of a game in which moments after smiling with satisfaction for killing a rival, someone who was covering him I brushed you. That’s life. At least, that of ‘Call of Duty Modern Warfare II’.

Another very relevant element of these maps —each one will have their favorites, I love ‘Taraq’, ‘Crown Raceway’ and ‘Santa Seña’— is that they adapt to the game modes: they get bigger in the modes with more players , Y dwarf in 6v6 modes for instance. The objective, once again, is to avoid long contemplative walks: here it is about shooting, not putting on the soundtrack of ‘Out of Africa’ and a coffee at the table to enjoy the graphics (which on the other hand are exceptional ). 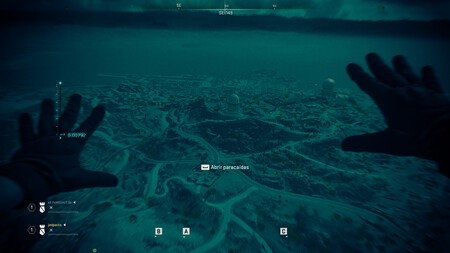 Another promising game mode is ‘Spec Ops’, a cooperative mode in which you can play with a friend in three different missions. This kind of “campaign” you have not convinced me at all, and although the missions are funny, their linearity and their limited difficulty make them almost an appetizer of the real game that are undoubtedly (at least, in my opinion) the aforementioned online modes.

A game within another: ‘Modern Warfare II’ is also an amazing weapons simulator

My colleague Rubén Márquez said it in Vidaextra: the gun play of the CoD is sublime, and I would say that it is certainly superior to that of the ‘Battlefield’. The response and sensations transmitted by the weapons is fantastic, but this ‘Call of Duty: Modern Warfare II’ is a prodigy (or a curse, depending on how you look at it) for those who love the world of weapons and its customization. 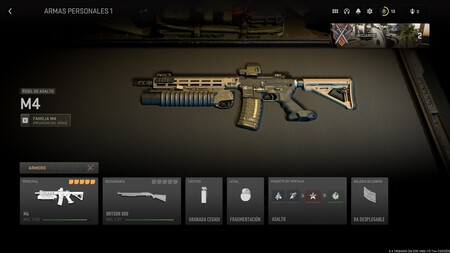 In fact, this weapon management thing is like having a game within another game in ‘MW II’. It is a fascinating section due to the level of customization and detail that it is possible to configure in each available weapon.

The progress system, yes, is quite annoying, and if one is not well informed it will be difficult to know how to get the legendary and coveted MP5 or the lethal FTAC Recon. In the end, everything is based on gaining experience with inferior weapons that give access to new options and superior weapons. Here those responsible for Infinity Ward make it clear: if you want good weapons, you will have to work hard playing (and killing) a lot. 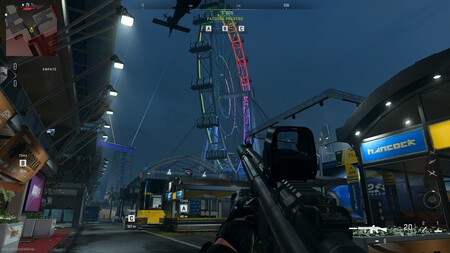 If you do, yes, there will be rewards, especially if you are one of those who wants to have the best of the best. The level of customization and improvement that we can reach is, as I say, worthy almost of a weapons simulator in itselfand in the armory area, where we can configure all the elements, we will even have a shooting range to “get a feel” and test how the weapon responds with the improvements that we are adding and removing.

It is also interesting the limitation of five accessories per weapon. Otherwise we could go crazy with exaggerated creations, and I think it’s a good balance for a section that gives a lot of play —pun intended— and that is a fundamental part of game development.

‘Call of Duty: Modern Warfare II’ is, as I said, an absolutely dizzying game. One that takes advantage of all the mechanics of the past, but to which it also adds some new ones. It is fantastic to have these new options to be able to shoot (with a secondary weapon) while we are half hanging from a ledge (long live parkour), and the possibility of take advantage of the so-called “quatic combat” that allows shoot underwater (also with secondary weapon or with certain equipment). 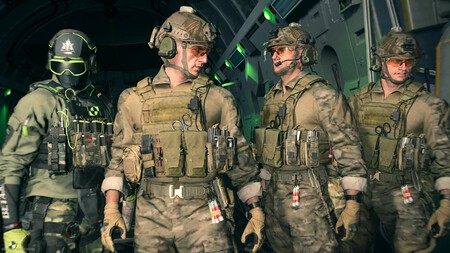 There is also a most pleasant surprise with this ‘Modern Warfare II’: the solidity of the first person mode is absolute, but if that is not enough for you the game can become a shooter third person in the style of the best ‘Gears of War’.

This option is only available in some game modes in which we can switch between one and the other. The camera, which is in a slightly higher position, has the advantage of offer better peripheral vision, and it is in this mode that we can also “peek” into corners or walls to ambush the enemy. Of course: it does not pose an advantage over rivals, because in these games everyone who plays will also play in that format.

For many, the third-person view is probably a curiosity, and it is clear that the traditional FPS mode will be the most popular. Here ‘Call of Duty: Modern Warfare II’ shows all its virtues and it becomes a real frenzy. A dizzying game that is impossible not to enjoy.