With the third season of ‘Kaguya-sama: Love is War’ It seemed that we had reached the end of the anime series, but we still have a movie ahead of us and the romantic comedy may still have a lot of fuse to burn. ‘Kaguya-sama: Love is War -The First Kiss Never Ends’ opens on December 17 in Japan, and with the date so close, new details have already been dropped during Anime NYC this past weekend.

Another chapter in history, and with the same team

A-1 Pictures was in charge of the animation of the series, and the same team has returned to take charge of the film with shinichi omata as director and yasuhiro nakanishi as a screenwriter The music has again been done by Kei Haneoka, and in the trailer you can hear the new main theme: ‘Love is Show’ by Masayuki Suzuki with Reni Takagi.

An approximate US release date has also been confirmed, with Aniplex distributing the ‘Kaguya-sama: Love is War’ movie starting in February 2023. In Spain there is still no concrete news to see if there will be a theatrical release, and first we will have to see who gets their license.

If not, it is possible that it will happen like with the first movie of Sword Art Online: Progressive‘, which skipped Spanish theaters at the time and has ended up going direct to streaming. In case it reaches the big screen, it should be expected for February or March of next year at the earliest. 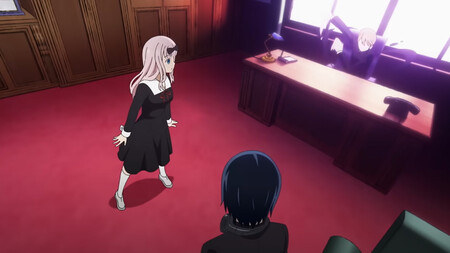 ‘Kaguya-sama: Love is War -The First Kiss Never Ends-‘ takes place after the third season of the animeand we already know that there is another anime project of the franchise in the works so we may have a fourth season in the offing.

Meanwhile, the manga has already ended for now and it seems that aka akasaka He has retired as a cartoonist, although he does not close the door on telling more of the story in other formats.