Malian arbitration has distinguished itself in Africa and in the world, by referees whose performances determined their strengths: Modibo N’Diaye, impulsiveness and authoritarianism on the ground, Drissa Traoré dit Driboss, Olympian calm, Sidi Bekaye Magassa and Moussa Kanouté, the passion for the profession. Dramane Danté embodied tranquility and composure. Koman Coulibaly held the secret of imperturbability and courageous decisions supported by the mastery of the laws of the game. One of their youngest, Ousmane Sidibé, is our hero of the week, to maintain the torch of the chronicle “What have they become ?”. He is more akin to Modibo N’Diaye, in terms of morphology and temperament. Certainly, the times are not the same, otherwise they have practically the same assets. That is to say making difficult decisions in difficult times and without giving yourself the time to calculate the consequences. This is one of the qualities that allowed Ousmane Sidibé to impose himself, to establish his authority on the pitch, to the point that the players called him “crazy”. Computer engineer by profession, Head of the IT Department of the Central Bank of the Sahel, let’s discover together the career of this referee with multiple anecdotes. And what prompted him to embrace the profession of referee?

For Ousmane Sidibé, a good referee embodies personality, courage, good physical condition. He must also know how to apply the laws of the game at the right time, without thinking about the risk of being pressured by the public. Corruption in arbitration? This was discussed in our interview. On this recurring phenomenon in the profession, he admits having been approached. But every time, it was a rejection out of hand that blocked all these attempts at corruption. For those who know the temperament of referee Ousmane Sidibé on the pitch, there can be no doubt about these statements. From the point of view of frequency of incidents, a football match is identified with a criminal trial where the protagonists clash around the essential: the manifestation of the truth, therefore victory. But as much as the imperium of the president of the court imposes itself on all parties to calm the heat, the sole personality of the referee is his key to managing a high-risk match.

This parallel in the form of a prologue is explained by the landing of a certain Ousmane Sidibé in the main vestibule of the section “What have they become? “. This former international referee has always been appointed by Femafoot to officiate major derbies. And no one is unaware that a match Djoliba vs Stade Malien de Bamako, or a Mali Cup final (regardless of the opponents of the day) is naturally a source of tension. 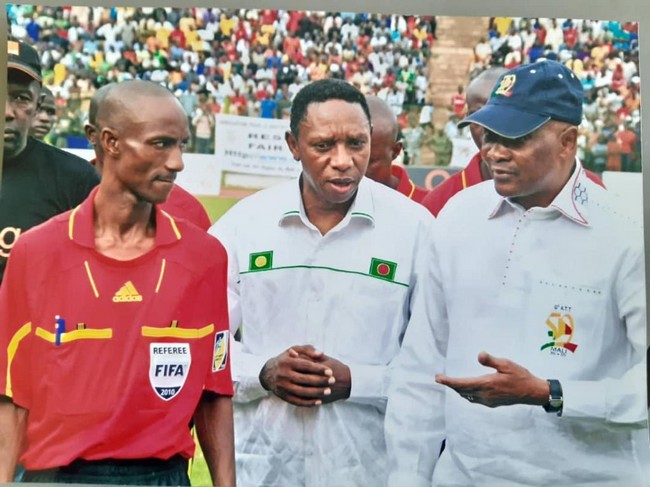 We began our remarks with this championship match (2005-2006 season) between AS Réal de Bamako and USFAS, officiated by Ousmane Sidibé. An incident interrupts the meeting for at least ten minutes. The soldiers strongly dispute a goal of Real. Among the protesters, it was above all Sékou Diawara who stood out for his gestures towards the referee. He vociferated so much that the assistant referee Mamadou S. Haïdara (very gifted in Martial Arts) left his zone to rescue his colleague. Always equal to himself, he asks his linesman to return to his place. In such a situation, what should be done? Usfas disputes a goal, would a red card against him fix things? Referee Ousmane Sidibé did not make this calculation. When everything is back to normal, he calmly walks towards Sékou Diawara to show him a red card. This reaction of the referee creates a cold shower, and the match resumed without problem.

To comment on this meeting and above all to justify his attitude, he said that a referee backed by the laws of the game fears nothing. Naturally, I am not afraid, but my strength also resided in the application of the texts, he maintains.

Another anecdote: in the final of the Mali Cup played in 2007 in Kayes, the late President Amadou Toumani Touré “ATT” at the time of the presentation called him “Mr. Red Card”. This day, he was 4th referee. Ousmane Sidibé did not engage in arbitration out of love, but rather to correct a fault. His nervousness in youth had no limits. His uncle, Cheick Oumar Dia, former international referee, (at the time president of the Regional Commission of Arbitrators of Bamako), took the initiative to incorporate him in the arbitration. Because he will face the enormities of the supporters without having the possibility of stopping a match to bring his reply. In time, he will get used to it, and self-control becomes the ultimate weapon to contain his nerves.

Ousmane Sidibé became a District trainee referee in 1995, along with Mamadou Haïdara, Ousmane Karembé, Drissa Kamissoko, Kankou Coulibaly, Awa Sangaré “Pecos”, Abdoul Karim Diallo. Immediately placed under the tutelage of the elders Sidi Bekaye Magassa, Moussa Kanouté, Dramane Danté, Seydou Traoré known as the Son, Moussa Ben Deka Diabaté, these youngsters evolved together to take over. It is obvious that the supporters quickly retained Ousmane Sidibé. Because his temperament, which controlled his radical decisions, was sure to put their team in difficulty. Between 1995 and 2005, he reached the top of refereeing by pacing the stairs. Designated best referee of the 2004-2005 season, the inclusion of Ousmane Sidibé on the list of international referees became a logic that the Federation respected the following year.

His first away game fell on an Equatorial Guinea-Cameroon duel, for the CAN 2008 qualifiers. Was this baptism of fire considered a suicidal mission? Not at all, he said. Because its future and its future depended on the outcome of this meeting. He makes a flawless trip. What was a trigger on the international level until his early retirement. At the same time, Femafoot designates it as an officer, Malian classicism. From then on, he never left this lap. An ascent which is explained by the retirement of the two major central referees, namely Sidi Bekaye Magassa and Moussa Kanouté.

The young Ousmane Karembé, Koman Coulibaly and Ousmane Sidibé take the torch of Malian arbitration. They were a tight-knit group and rubbed shoulders to avoid a rift in their relationship. Each on his own goes his own way. Ousmane Sidibé maintained a career of twelve years, sanctioned by the tour of Africa for the CAN qualifiers 2008, 2010, 2012, 2014, 2016 and 2018, two Mali cup finals (2010, 2013), he was 4th for the one played in Kayes in 2007. In 2018, he decided on early retirement, because the many trips abroad had influenced his administrative career. Since he had been appointed Head of IT at the BCS, the time has come for Ousmane Sidibé to devote the second stage of his life to his administrative function.

Since his retirement until the recent past, he has been inactive in relation to footballing activities. He regrets not having been appointed by the Malian Football Federation as a referee inspector, despite his status as a national instructor. But Koman Coulibaly, director of the Malian refereeing department has just organized a refresher course for former referees, so that they can supervise their juniors.

The former referee is married with six children.

He remembers as good memories his first international match in Equatorial Guinea, the final of the cup of Mali of the fiftieth anniversary which he refereed.

The Djoliba-Stade derby, in 2011, after which he was taken hostage in the locker room by Djoliba supporters (the refereeing trio was taken to the GMS by the police to save them), and the intrusion of he bad memories of a Moroccan supporter in the handrail while officiating the meeting between Morocco and Cameroon.