good news for Karim Benzema. The National Police has arrested one of the alleged thieves who were part of the robbery suffered by the forward of the real Madrid at his home last January. The news of the assault on the white team player’s house had a tremendous impact, since the members of the squads of the best teams in The league They are habitual victims of this type of crime.

Now, the security forces and bodies have managed to find one of the assailants who disturbed the tranquility of a Karim Benzema who was very affected by the unfortunate events that occurred at the beginning of the year. This man has been captured by the National Police in La Junquera just when he was about to leave Spain across the border.

The alleged perpetrator is a man located at dawn this Thursday and was arrested just at the same time he was trying to leave the national territory. The Police proceeded to make said arrest having serious suspicions that this individual had been one of the culprits of the robbery with force committed at the home of the Real Madrid striker. After passing at the disposal of the judicial authority, his entry into prison was decreed immediately.

The investigations into the case of the robbery at Karim Benzema’s residence began on January 23. The assailants broke the exterior windows of the house to gain access to the interior of the house in the municipality of Saint Sebastian of the kingson the Madrid’s community. According to what the agents who traveled to the scene of the events could verify after receiving the pertinent notices, the assailants raided Benzema’s property, forcing different entrance routes to steal objects worth a huge amount of money.

Karim Benzema with the Ballon d’Or at the Santiago Bernabéu

After investigations began, a Provincial Judicial Police Brigade of Madrid began to make the pertinent investigations to advance the case. Finally, it was possible to identify the alleged perpetrators of the robbery committed at Karim Benzema’s home. Said investigative work was carried out jointly between the Spanish National Police and the french police. At one point, even a European arrest warrant.

Within the group of alleged perpetrators, one of them was located near the municipality of La Junquera, an area through which he intended to leave the country. Through an arrest warrant issued by the Court of Instruction No. 2 of Alcobendas it was possible to give way to his capture. As soon as said process was completed, the person considered until now to be one of the alleged perpetrators of the robbery committed in January at Karim Benzema’s home was placed at the disposal of the judicial authority, who ordered his immediate imprisonment.

The robbery occurred while Benzema was playing a match with Real Madrid against elche. An aunt of the white player was the last person to leave the house, but she did so by forgetting to set the security alarm. This oversight was taken advantage of by the assailants to gain access to the property owned by the player, approaching the home through the pool area. 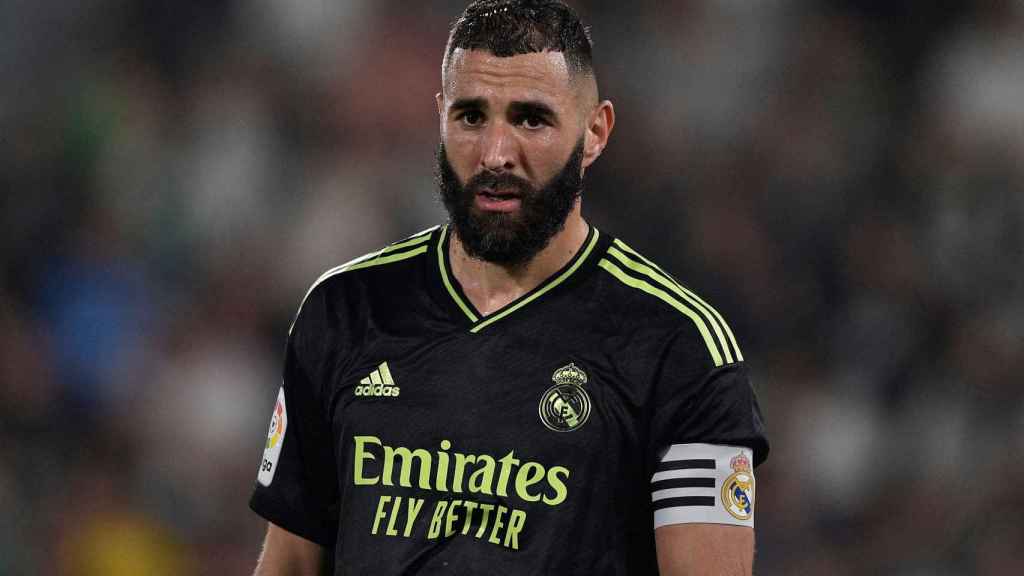 Karim Benzema, in a match with the black Real Madrid shirt for the 2022/2023 season

When Karim Benzema returned to his residence after having played the aforementioned match with Real Madrid, the whole house was resolved. The thieves had seized significant loot since they had stolen jewelry, watches, bracelets and diamonds that the striker kept. During the robbery, one of the thieves cut himself on one of the broken glass in the entrance, causing a serious cut.

He left a trail of blood and even used towels from the Real Madrid striker’s own house to try to stop his bleeding. That has been one of the best clues to follow his trail until having proceeded to arrest him thanks to the work of the Scientific police. This robbery joined the one already suffered by the new Ballon d’Or in 2019.