15 years is no small thing. tell it to Ulisesfor example, to whom it took him less to return to Ithaca after surviving the sirens, polyphemus and the wrath of the gods. In 15 years, too, he would have had time to build seven Eiffel Tower or to give another pair of sisters to the unfortunates Twin Towers. And 15 years are the ones that the pelotari has been waiting for Inhar Ugarte to play with the basque team officially, something that is closer than ever thanks to the modification of article 44 of the Sports Law approved this week in the Congress of Deputies.

Ugarte (1989) has received the news at a time when the Moiras have the end of their career with a snip. However, the possibility of being the first pelota player to represent the Basque Country in a World Cup It is well worth the effort to continue giving thread to the spinning wheel. “For the World Cup Argentina of 2026 I will be 37 years oldbut this motivates me to be in shape and be able to be,” he tells EL ESPAÑOL excitedly.

The bomb exploded this Tuesday when, in the midst of processing the Sports Law, the PSOE surprised and agreed to the PNV’s request that some Basque sports teams can participate independently in official international competitions. Amendment 365 that modifies the law ended with 21 votes in favor and 16 against.

This Thursday, in addition, he received the news that The 2030 World Cup will be played in Bilbaoa coincidence that makes him suppose that the amendment to the Sports Law is not going to be left in the lurch: “I think that everything goes together, they will have reached an economic agreement and the Basque Federation will have assumed the cost of holding a World Cup because they will compete officially”. An appointment that he would arrive at 41 years old, so he does not think he could dispute it.

“I’m not bad at it,” says Ugarte, who was junior world champion in the modality of pairs by hand in ratchet and chosen athlete of the year 2009 in Getxo. In the ratchet modality skill is the most important thing. However, and despite being an outstanding professional in Basque pelota, he also works as a social educator: “It’s as if I had two salaries.”

In 2008 he refused to be part of the pre-list of those summoned by the Spanish National Team for the U-22 World Cup in Uruguay. In 2010, 2014, 2018 and 2022 he did the same with the absolute World Cups in Argentina, France, Spain (Barcelona) and in Biarritz (France), where this Sunday, October 30, the tournament begins.

The resignation to represent Spain in international tournaments has meant a economic damage that joins the one inherent to its type of game and that makes it impossible for him to live on Basque pelota alone: ​​”The trinquete modality is a court that is played above all in the French Basque Country. I compete on the professional circuit in Biarritz, Bayonne… and from there inland. Some professionals here in the Basque Country can live off Basque pelota, but I don’t. I have been able to lose money by not going to the World Cups, but our sport is ‘amateur’ at the national team level, the gold medal is 3,000 euros“, Explain.

Sportingly, on the other hand, it has no repercussions, since its license is in the Basque Federation, independent of the Spanish. “I have not had any type of sanction. Without more. You tell them you’re not going to play, period“, remember. 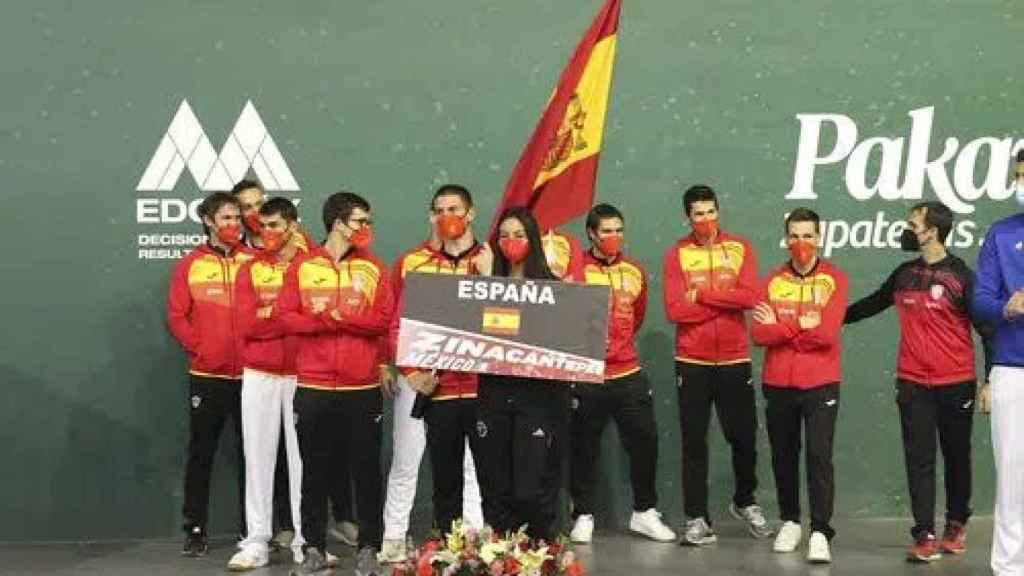 The Basque Federation competes in international Basque pelota tournaments, but not officiallysources from the federation explain to this medium. In those international confederations, yes, Spain does not participate, but it has been the opportunity that players like Ugarte have had.

—How have you coped with these years of renunciation and waiting?

I have been waiting for this moment for 15 years. During this time I have always tried to help on popular platforms in favor of the Basque Country National Team, in international tournaments… For many years there have been international, pseudo-world competitions, organized by Basque national teams with national teams that are not Spain or France. With this law we will be able to compete in the real World Cups against France and Spain, which are the ones that have put obstacles in our way.

—Do you think there will be Basque players who will prefer to play for the Spanish flag?

—I don’t know if there is anyone who is going to choose to represent Spain, it is a personal choice. 95% of pelota players in France and Spain are Basque. The sport is called Basque pelota. Those who make up the Spanish and French federations are from Vizcaya, Guipúzcoa, and the three provinces of the French Basque Country. I have refused to play with Spain because I don’t feel Spanish, the colors don’t represent me and I don’t like to play under this flag. I follow my principles. It is our sport and the majority of pelota players will choose to play for the Basque Country.

—Does this amendment to the law favor the pelotari?

-Many colleagues have gone to World Cups because I have given up Spain. This is good because the level of the federation will rise: there will be Basque pelota players who remain without entering the Basque National Team and then they will accept to play with Spain or France. Now there will be one more team that will give the World Cup a super high level. In addition, we can also see a Basque Country-Spain derby.

In the first moment, the Basque, Navarran and Spanish pelota federations were independent. Ugarte believes that the Spanish began to “move the issue in the International Federation” but only got the affiliation of the Navarrese. For this reason, “the Spanish Federation can squeeze a Navarrese who refuses to play with Spain, but cannot do anything to a Basque”.

In spite of everything, the great objective of the Basque independence movement of getting the pelotari to play for the Basque Country had remained unattainable until now… with the precedent of 2002 that means that no one has them all.

The trick that could be saved Pedro Sanchez on the sleeve to change the ending of the movie like Robert Redford fooled everyone The hit (George Roy Hill, 1973) is that he breaks the third leg of the table, an essential one but that nobody is counting on (except the pelotari, who already know the trap).

In order for the Basque National Team to compete against the Spanish National Team in an official tournament, it needs the recognition of the International Federation, a “private entity of federations where each one has one vote. If they are not in favor of integrating a new federation into it, they enters, and it doesn’t matter what the Sports Law of that country says”, sums up Ugarte. In addition, in the International Federation “those who rule are Spain and France, and the Spanish does and undoes according to what the Government and the Higher Sports Council say“, Add.

—The 2002 World Cup was played in Pamplona and even then there was another project like the current one. What happened then?

—They reached an agreement and everything. It was ruled that the final decision was left to the International Federation. The Basque Federation spoke with the rest of the federations before the vote and it was going to come out yes, but it is said that just the night before there was pressure from the Spanish and French federations and it ended up saying no.

A worrying precedent due to the similarities, but which presents some hopeful differences for Ugarte: “In 2002, in Madrid, politically, the agreement between the Government and PNV that has been reached now had not been reached. Voting will be repeated in the International Federation as it was 20 years ago, but I imagine that it will be well closed and with guarantees, that you will not trip over the same stone again“.

The world Cup de pelota vasca is a tournament that is held every two years and works as a qualifier to compete in the World Cup, which is held every four years. If the Basque Country can compete and qualify —a bet with the same risk as that of those who played something that the Messi 19-year-old would ever win the Golden Ball—, the next World Cup will be played in saint Louisa province located in the Sierras Grandes de Argentina. 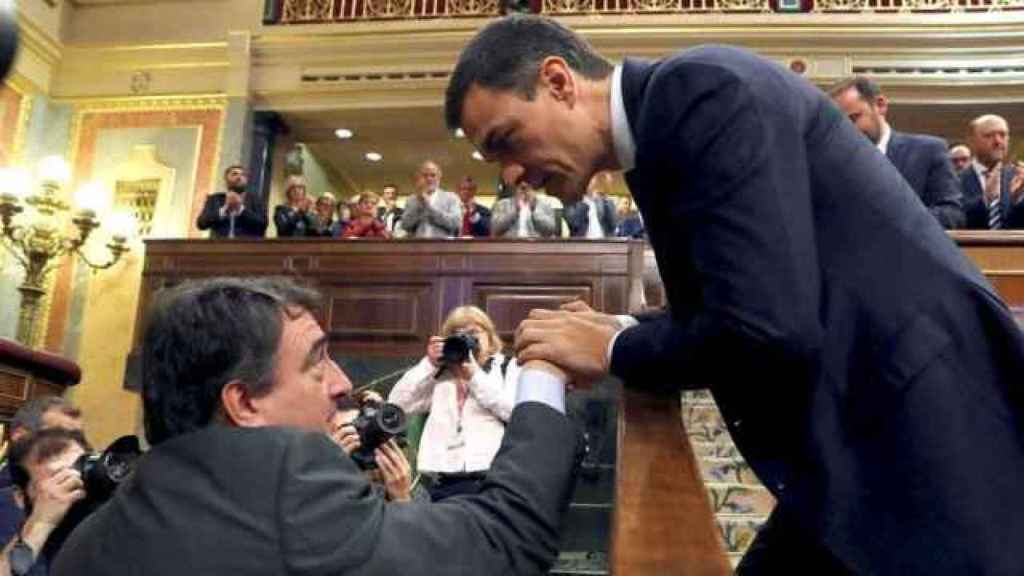 The President of the Government, Pedro Sánchez, together with the PNV spokesman in Congress, Aitor Esteban.

“I hope that by then we can, for the first time, compete as a National Team of the Basque Country and I will enjoy it,” dreams Ugarte. The reaction of the international community to this possibility, he says, is “very favourable”: “They have always recognized us and have been in favor. Many pelotari play in the Basque diaspora in South America.”

Ugarte complains that, if the colleagues from the different countries have not accepted the Basque Country, it is not because they do not recognize it, but because “the International Federation has threatened those pelotari with that, if they play the tournaments organized by the Basque Federation, they will not be able to play the official competitions”. The new Sports Law, in his opinion, would stop all these “tricks” at the root.

—What will happen to the pelotari of the diaspora who feel Basque? Will they be able to play with the Basque Country National Team?

“That’s a good question to which we don’t have an answer yet.” That’s fine print.

“But do you think they would have that right?”

—If a Navarrese wants to compete for the Basque Federation he also deserves it, of course, he should be able to do so. Possibly, in legal terms, he has to get a license for a town in Gipuzkoa.

—I don’t know how I could do it, but we will also have to give it the opportunity. The important thing now is that this comes to light and then we will look at each specific case.

—Can you imagine winning Gold in the 2026 World Cup? Who would you dedicate it to?

“It would be a bombshell.” If I win, I will dedicate it to all those people who have worked in the street and who have taken a lot of blood to make the Basque Federation official. Even people who have already died without seeing their dream come true. And, well, I also dedicate it to myself, for having been faithful to my principles for 15 years without representing Spain while other colleagues have taken advantage of that to play in World Cups.