The life of Jose Luis he had the same bad luck as Alejandro’s on Wednesday morning. Both were the fatal victims of the shooting experienced at kilometer 2 of the highway that connects the municipalities of Argamasilla and Villamayor de Calatrava, in Ciudad Real. Jose Luis he was a farmer, he was 60 years old and he was at that precise moment plowing and sowing the land on his tractor. However, what seemed like a normal day in his daily routine in the field turned out to be very different, almost from a movie.

The 60-year-old man was surprised by a strong argument between Alfonso, the shooter, and his father. Both lived on a farm near José Luis’s land. His pacifist character made him try to put a truce in between. Nevertheless, the result of this heroic feat was his death on the spot after Alfonso pulled the trigger of his rifle. He was left lying on the ground. Shortly after, the first reinforcements of the patrols arrived, among which were Alejandro and his, another colleague from the Local Police, who is recovering in the hospital after receiving another of the shots. They both tried to help him, thinking that he could stay alive. But when Alejandro poked his head out from behind the cover of his car, Alfonso pulled the trigger again and also ended the life of the 41-year-old agent.

The two deaths have shocked the residents of Argamasilla and Villamayor de Calatrava, who claim to be still in a state of shock after what happened. As they tell EL ESPAÑOL, it is about one of the most tragic events that have been experienced in the area in recent decades. About José Luis, everything is good words. They define him as outgoing, sociable and with an incredible gibberish. “He was a very optimistic person. He was always laughing and saying funny things.” they add.

Farm where the shots were fired.

In the same way, those who have had the opportunity to get to know him closely in the professional field highlight his hard-working character. José Luis was dedicated to agricultural cultivation, specifically the olive tree. Everyone in the area confesses with a big mouth that he was one of the few professionals in the sector. “He was very hardworking. He had a lot of farm machinery and was one of the few who really knew. He was also dedicated to cereal and other things, but what he had the most was olive trees”, they say.

It is said by those who know him after passing through the cooperatives of both municipalities. For a time he was a partner of Villamayor’s, until about six years ago. “He even became part of the Board of the Cooperative. When we found out yesterday we were disappointed that you can’t see. He was always working. When I heard the news I told another colleague of mine and we didn’t believe it. We were frozen when we found out that it had been José Luis. On top of the fact that he went there to separate them, that he saw them arguing… ”, regrets one of his former colleagues.

Same sentiment expressed from the Our Lady of Help Cooperative of Argamasilla. They also knew José Luis, in this case because he was a client. “His father-in-law was a member of the cooperative, but he resigned many years ago. The exploitation and the product with which José Luis marketed it took him to Almodovar. Here we knew him because he bought products on a regular basis”, says the manager.

They still don’t believe what happened, especially because they had recently met him at the wake of another of Argamasilla’s neighbors. “He was there with the woman. Two days ago I saw him. He hasn’t been coming to the cooperative much lately, but once in a while he did come to pass the ITV or something else. It has been the most shocking news in recent years”, they conclude.

After his death, José Luis leaves his wife and two children. One of them, the oldest, his right hand in the field. “The eldest son worked with him as a freelancer. He came to study, but in the end he said that he wanted to dedicate himself to the field. They bought machines and between the two of them they did everything. They were very hardworking people, of those who are there from Monday to Sunday”, they point out. However, the one who had always been clear about what his future would be was the little one, Alejandro. “I have always known them and from a very young age I used to say that when I grew up I was going to be an aircraft mechanic. And there it is, at the airport,” they say. 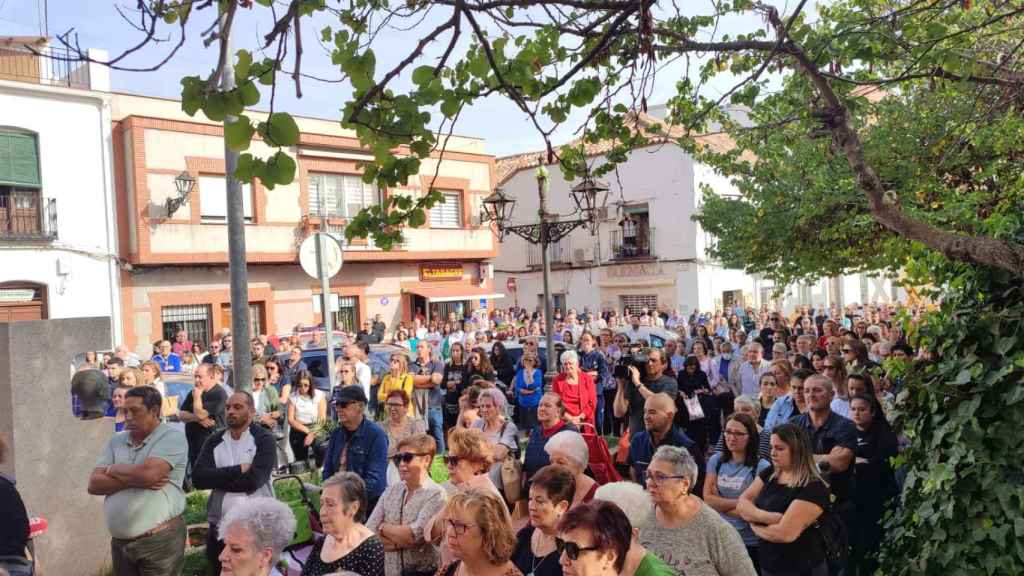 Act in honor of the two fatal victims of the shooting, in the Plaza del Ayuntamiento de Argamasilla.

At 12:00 noon on Thursday morning, all the residents of Argamasilla had an important appointment: to go to the Town Hall square to pay tribute to Alejandro and José Luis, the two who died in the shooting. More than 1,000 people have gathered to observe the five minutes of silence convened in memory of the fatal victims. With the flags at half-staff for the three days of official mourning, silence and tears have taken over the residents of the town of La Mancha, who have not been able to avoid most of them being moved during the act.

The rally was led by the mayor of the municipality, Jesús Manuel Ruiz Valley, who was also accompanied by the president of the Ciudad Real Provincial Council, José Manuel Caballero, and the deputy delegate of the Government of Spain in the province, María Ángeles Herrero. The relatives of the deceased have also been present, although they have not preferred not to make statements to the media. 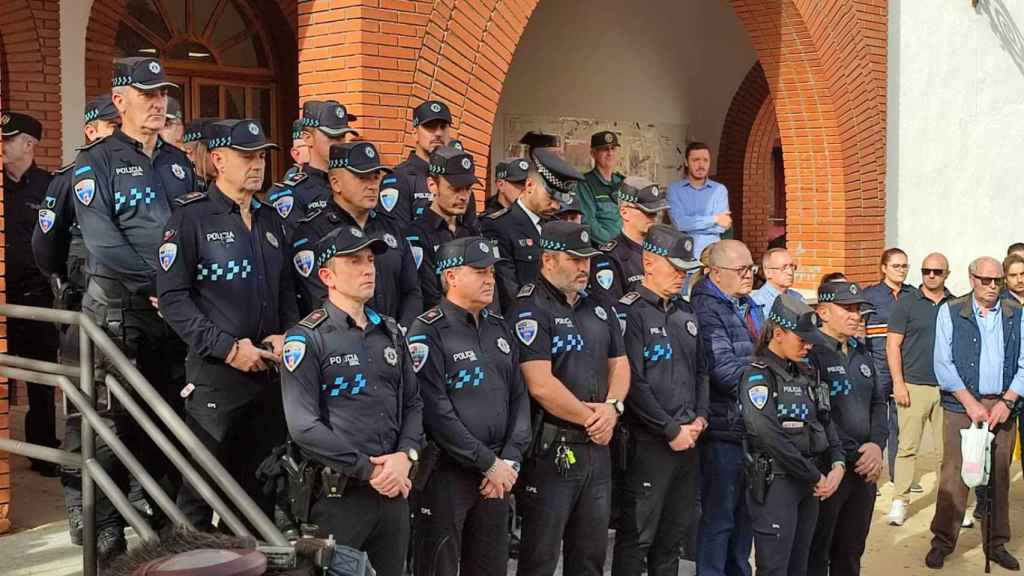 Local Police pays tribute to the two deceased in the deadly shooting in Ciudad Real.

Words have not been lacking for Alejandro, nor for José Luis himself, about whom he claimed to have met him a few days ago and to have talked about the rains and the olive harvest. “They have been heroes because they, without seeing that they could lose their lives, tried to help”, added.

Another of the most emotional moments of the act has been the arrival of the patrols of the local agents of the zone. They have not only been present Alejandro’s companions, but also members of the Puertollano Local Police, agents of the National Police and several of the Civil Guard. After the five minutes of silence, one of the most exciting moments of the morning has been experienced. The silence was transformed into noise in the form of applause, which lasted for about two minutes.

About the deceased local policeman, there are also positive words to define him among the neighbors. “He was a wonderful boy. He was super nice to everyone. He spoke to everyone, he greeted him… he was a very majestic person. It has hit us like a bucket of cold water. We are shocked. We were not expecting it,” a neighbor told EL ESPAÑOL. He himself had given way to him first thing in the morning of the event when he was leaving his son at school. 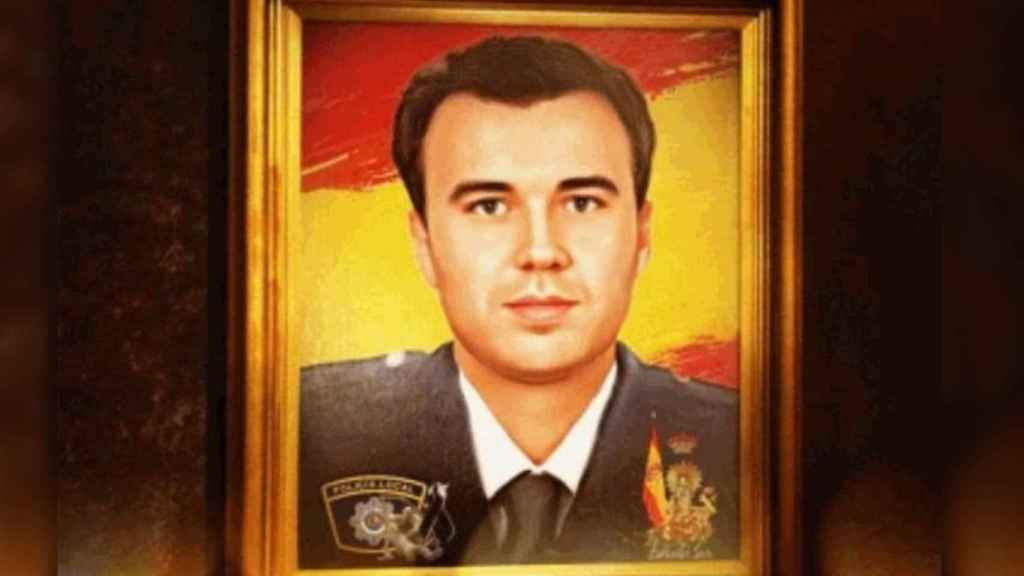 Alejandro, the local policeman who died in the shooting.

After his death he leaves Vanesa, his wife, and their daughter who is only 7 years old. With them he lived in the small town of La Mancha, to which he had been transferred for work reasons 14 years ago. “All of their family is from abroad. They were here for his work. She (his wife) began her life here little by little. She set up a handicraft business, bracelets, and they’ve stayed here. They had integrated very well. Both very nice, pleasant and affectionate. They were known for that and it has been quite a blow ”.

recovery of the wounded

The act, in addition to paying tribute, has also served to learn the latest information related to the event. The delegate of the Board in Ciudad Real, Carmen Theresa Olmedo has confirmed that Alfonso’s father has already been discharged from hospital and that the two wounded officers are progressing favorably in the hospital.

It has also announced the posthumous award of the gold medal for police merit to Alejandro. “We want it to be in some way an acknowledgment and a relief for a family that is having a very bad time right now, we are at your disposal from the regional government”, he commented.