The Russian national team in a friendly match with the team of Kyrgyzstan will experiment and take risks, and not adapt to the opponent. This was stated at a press conference by head coach Valery Karpin. In addition, the specialist explained the decision not to call Ruslan Litvinov and Roman Zobnin. In turn, Daniil Fomin admitted that he was glad to have the opportunity to enter the field to the anthem of his country.

On September 24, the Russian team for the first time in its history will play with the team of Kyrgyzstan. The match will take place in Bishkek, and, as Nurdin Bukuev, general secretary of the local football union, promised, the Russian anthem will be played before it starts. There will be no ban on the Russian flag either.

Deprived of time: which of the Russian players will suffer more than others from missing Euro 2024

Passing Euro 2024 could be a heavy blow for a number of Russian footballers. Artyom Dzyuba risks losing the reason to surpass…

Two days before the game, 25 local football players (22 field players and three goalkeepers) arrived in the capital of Kyrgyzstan, as well as the coaching staff headed by Valery Karpin. At the last moment, the team lost Dynamo midfielder Arsen Zakharyan. He was injured in a match with Zenit and after a medical examination he left Novogorsk on the very first day of training camp. Even earlier, it became known about a serious injury to CSKA defender Igor Diveev. He was diagnosed with a fracture of the tibia, and the athlete will need at least three months to recover.

On the eve of the main match in Bishkek, a friendly game between the RFU and KFS teams took place, in which Valery Karpin scored a double. He joked that he was prevented from scoring a hat-trick by local refereeing. Meanwhile, the players of the Russian national team held a pre-game training session in full force at the Dolon Omurzakov Stadium. After it, a press conference was held by Dynamo midfielder Daniil Fomin, who was chosen by the captain for the upcoming meeting, and the team’s head coach.

— Daniil, will you come out as a captain tomorrow?

– This question is not for me. I dont know. If so, then I will answer this question. I can’t say anything.

– Did you manage to study the opponent? What strengths and weaknesses can you highlight?

– We had theoretical lessons on the opponent. Some strengths and weaknesses can not be noted. We will have a match for the first time in a long time. We will try to have fun and show sports results.

— The General Secretary of the CFU promised that the anthem and flag of Russia would be present at the match. What does this mean for you?

— Did you have any cultural program? Did you manage to see the city?

We had a walk today, walked a little. We looked at the city when we rode the bus from the airport and to the stadium. There wasn’t much time. We came here to play football, not to watch the city.

– Fedor Smolov said that he watched the games of the Kyrgyz national team with the teams of Japan and Tajikistan. Any other matches analyzed on the theory?

– This is probably a question for Valery Georgievich. We didn’t watch, I can’t say anything. Your trainer will tell you everything.

– Where do you get motivation in the absence of official matches?

Have you already had your first workout? How do you like the quality of the lawn?

— Lawn of normal quality. It will be played by two opponents. I can’t say anything else.

“Time for experimentation and risk”

— Valery Georgievich, tell us about your opponent. How much did you manage to study the team of Kyrgyzstan?

– I have already said five times: we did not study the opponent in depth, we did not intend to and do not want to. We push ourselves away. With me, this will be the first match in which you can try something, experiment and take risks. Before that, there was always a struggle for every point and goal, especially not before experiments. Therefore, I want to try something, regardless of how the opponent will play.

Have you already decided on the composition?

— The composition has already been determined. Find out tomorrow.

– What can you say about the psychological state of the players? The news is disturbing. Today in the hotel it seemed that they were tense.

“In my opinion, it’s just the opposite. Normal, good mood among the players. Everyone walks, smiles, trains with great desire. On theories before responsible matches, deathly silence. And today I went – noise and din! They smile and laugh – at least in front of me. Maybe they just smile at me? 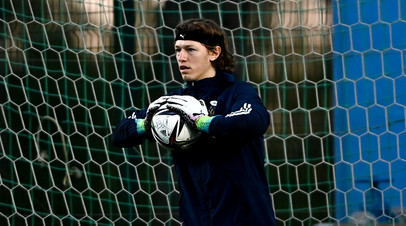 The Russian national football team completed training in Novogorsk and went to Bishkek for a friendly match with the Kyrgyz team. Not…

– Roman Zobnin asked not to be called to this meeting. Were there other players like this?

No, there was no one else. All the rest were not included in the final list of our choice. Roma really called and asked not to call, because there are some health problems. I treat this with understanding. If someone cannot or does not even want to, it makes no sense to persuade. Doesn’t want to – don’t. This will not affect future calls.

– Many journalists had difficulties with the departure, two even flew with your delegation. Did they ask questions at the border, did they ask for a military ID?

No, they didn’t ask me for a military ID. Everything went well for us, on time. As I understand it, everyone at the border is asked questions: have you served in the army, where are you flying to, how long ago did you take a ticket … Someone even tensed up.

– You were going to call Ruslan Litvinov. Why didn’t it work?

– Due to injury. We did not know if he would play the last match (Spartak – Lokomotiv, 1:0). Before that, he missed a week.

– Today you played a match in the RFU team with the CFU. Did a double. Please tell me how it went? Are you satisfied with the game?

– Another goal was not counted, as the refereeing was local. Dissatisfied. (Laughs.) The players of the national team did not watch the match, they needed to rest and prepare for training. Look at YouTube.