End to waiting and mystery. A new chapter of the war that has become the protagonist of the dressing room of the Spanish women’s soccer team is already known. This past Thursday it was known that fifteen of the regulars selected had given up being summoned due to their discrepancies with the coach Jorge Vilda.

Among the signatories were not even the soccer players of the real Madrid either Alexia Putellasbut other stars like the goalkeeper Sandra Cloths or the midfielder Aitana Bonmati. However, the best player in the world was considered within the group of affected although due to her injury state, she tore her cruciate ligament before the last European Championshippreferred not to manifest at first.

From the Real spanish soccer federation it was made known that these fifteen soccer players had sent an email to the body to communicate that they did not want to be called on the next date despite the fact that there are only eight months left for the start of the 2023 World Cup. A very convulsive and complicated situation to prepare for such an important appointment.

The reason seemed to be that these players did not want the continuity of Jorge Vilda at the head of the National Team. However, in the statement that these players have issued to make their position public, they have made it clear that they have not requested the dismissal of the coach at any time: “We have never requested the dismissal of the coach as has been commented.”

Jorge Vilda, during the Spain match against Hungary

A few words that have surprised since they remain unknown if there are really serious reasons to give up being summoned temporarily. Of course, they recognize that the function of ending the coach would not fall within their powers: “We understand that our job is not in any case to choose said position, but to express in a constructive and honest way what we consider can improve the performance of the group” .

The players allude in their letter to the fact that the instability in which they move, and for which they want to resign from the national team during this time, could cause damage to their health and even their physical integrity. They allege that they could be injured if they do not exercise in total calm, something they do not enjoy when they put on the Spain shirt under the protection of this coach and the current Royal Spanish Football Federation with Luis Rubiales to the head.

“The players regret, in the first place, that the RFEF has made public, in a partial and interested way, a private communication, with information that affects our health – which is part of our privacy -, sent in response to the request of the own Federation to know which of us wanted not to be summoned”.

“Communication to which, by the way, we have not received a formal response. Secondly, in no case have we RESIGNED the Spanish Soccer Team as indicated in its official communication by the RFEF. As we said in our private communication, we have maintained , we maintain and will maintain an unquestionable commitment to the Spanish National Team”.

“That is why we request in our communication sent to the RFEF not to be summoned until situations that affect our emotional and personal state, our performance and, consequently, the results of the Selection are reversed and that could lead to undesirable injuries. These would be the reasons that lead us to make this decision”. 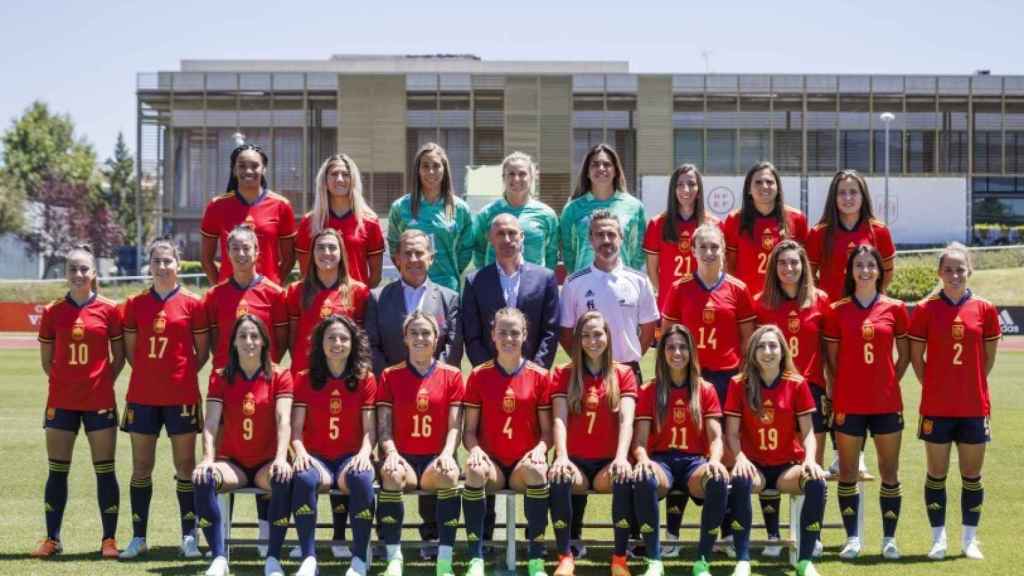 The Spanish women’s team poses before the European Championship.

“We want a firm commitment to a professional project in which all aspects are taken care of to get the best performance from a group of players with whom we believe that more and better goals can be achieved. We wish the best for the RFEF, for the National Team Feminine and for us in particular, without entering into public wars”.

“We have never requested the dismissal of the coach as has been commented. We understand that our job is not in any case to choose said position, but to express in a constructive and honest way what we believe can improve the performance of the group”.

“Can anyone think that, eight months before a World Cup, a group of TOP-LEVEL PLAYERS, which is what we consider ourselves, consider this decision, as has been publicly understood, as a whim or blackmail? Requesting not being summoned, we penalize our professional career, our economy and therefore
course to continue building something important in women’s football. Because getting to where we are right now has taken years of effort from many people. And there are still many things to improve as it is being shown recently.”

From our ambition as players, fighters and winners, we just want to be able to achieve maximum professional and personal success again. Last but not least, we will not tolerate the infantilizing tone with which the RFEF concludes its statement.”

“We regret that in the context of women’s sport we have to go to this extreme, as unfortunately has happened in other national teams and other sports historically worldwide, in order to advance in a powerful and ambitious professional project for the present and for future generations” .