On the day when Western politicians, diplomats and experts rushed to discuss new scenarios of a military conflict with Russia after President Putin’s appeal for partial mobilization, Moscow’s main ally, Chinese President Xi Jinping, made his key statement on the topic of war and peace.

PR campaign for allies: how the US is speculating on the topic of sending its military to defend Taiwan

The United States will send its military to protect Taiwan in the event of an “unprecedented attack” by the PRC on the island, said President Joe …

Speaking in Beijing at a seminar on national defense and military reform ahead of the 20th Chinese Communist Party Congress scheduled for October 16, Comrade Xi upped the ante in his game with the West. In response to the ongoing provocations around Taiwan and the US administration’s attempts to build a united Asian front of war with China with the participation of Washington’s allies and partners, the Chinese leader called on the Chinese People’s Liberation Army to focus on preparing for participation in real hostilities.

“It is necessary to conscientiously summarize and apply the successful experience of reforms, master the new situation and understand the requirements of the tasks, focus on preparing for wars, and also have the courage to explore and innovate,” the Chinese leader said, addressing the top political and military leadership of the country. Recalling that over the past ten years, the Chinese political and military leadership “fully implemented the strategy of reforming and strengthening the armed forces,” Xi Jinping urged not to stop there. The task of today and tomorrow, as the Chinese leader understands it, is to be ready at any moment to give a worthy military response to the challenge thrown to China, given that the situation in the world is becoming more and more unpredictable.

Xi Jinping’s position statement, in which he acknowledged for the first time that his country might have to fight on a grand scale, became sensational. After all, until recently, Beijing has stubbornly emphasized the need to use political and diplomatic, rather than military, methods of resolving conflicts, making it clear over and over again that it is better to negotiate at the negotiating table, and not measure strength in the air, on land and at sea. However, as a pragmatist, the Chinese leader cannot but be aware of the fact that today there is no one to talk to in the West – diplomacy is dead.

In this sense, Beijing is faced with a similar set of challenges that Moscow faces, only not on the European, but on its own, Asia-Pacific front.

In fact, for all its seeming sensationalism, Xi Jinping’s statement can be considered quite predictable.

What is called, the situation is mature.

This was confirmed by the turbulent events of August this year, when the People’s Liberation Army of China celebrated its 95th anniversary against the backdrop of a scandalous trip to Taiwan by Speaker of the US House of Representatives Nancy Pelosi.

Even then, at a reception at the Great Hall of the People in Beijing, attended by Xi Jinping, with an opening speech on the stages of military development of the world’s largest army today with more than 2 million military personnel, State Councilor Wei Fenghe, Minister of Defense of the People’s Republic of China, delivered an opening speech. “The PLA is a people’s armed force founded by the CCP. Over the past 95 years, under the firm leadership of the CCP, the People’s Armed Forces have made outstanding progress in gaining national independence, liberating the Chinese people, and turning the country into a prosperous and strong power,” Wei Fenghe said.

The Chinese army was born more than two decades before the People’s Republic of China was established in 1949.

During the Second World War, detachments of Chinese communists and partisans, together with units of the Kuomintang army, fought with the army of Imperial Japan.

However, the 95th anniversary of the PLA was an opportunity for the Chinese leadership to send a clear signal to the outside world, especially to the main opponents led by the United States: the former weak China of the Second World War era in Asia, which once could not defeat the Japanese imperial army alone, remained in the distant past. 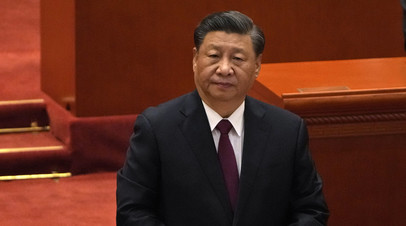 Chinese President Xi Jinping urged the Chinese army to focus on preparing to participate in hostilities.

The largest military reform since the time of the founder of the PRC Mao Zedong, which provides for the rearmament of the PLA, the reorganization of headquarters and the change in the roles of various branches of the military in planning operations, Xi Jinping first announced seven years ago, in September 2015, at a military parade in Beijing on the occasion of the 70th anniversary end of World War II. Even then, he announced that “China will reduce its troops by 300,000 troops,” thereby making it clear that in the course of the modernization of the PLA, the role of aviation and navy should increase, and the number of ground forces should decrease.

Recall that before the reform, the PLA retained the Soviet command structure and a large number of infantry, focused on waging a protracted continental war.

The modernization of the Chinese Navy as one of the tasks provides for the creation of a powerful fleet – several aircraft carrier groups. This should ensure the security of the maritime Silk Road and the implementation of other mega projects, as well as contribute to the solution of operational tasks in connection with the tense situation in the East China and South China Seas. An illustration of the fruits of military modernization was the demonstration by Chinese television of a video with the launch of a ballistic missile resembling a hypersonic weapon DF-17 (“Dongfeng-17”) timed to coincide with the 95th anniversary of the PLA.

“The PLA shows its capabilities by declaring its readiness to take any retaliatory measures if the US persists in provocations,” war expert Song Zhongping told the Global Times. “Such a missile can be launched autonomously at any time and from any location, it is a very maneuverable and versatile weapon,” Sun Zhongping said.

We add that the DF-17 is capable of hitting both stationary and slowly moving targets, which makes it possible to use this weapon to strike aircraft carriers. Earlier, Chinese television showed a video “The capabilities of Chinese troops in 81 seconds” with footage of the launch of a DF-17 missile from a transport and launcher located in the desert.

Considering that the celebration of the anniversary of the Chinese army actually took place in conditions close to combat, Xi Jinping’s latest statement about the need to prepare for wars did not become a manifestation of some kind of “Chinese militarism.” It only fixed a new harsh reality, clearly not created by China. Not content with creating a global front against Russia, the US and its allies have opened a second front against China. In response, China makes it clear that it is ready to adequately meet the multiplying threats and show its iron fists to the instigators of Asian wars and conflicts, having removed the elegant but worn-out velvet gloves of diplomacy.

The point of view of the author may not coincide with the position of the editors.