The discharges from the sunken ship OS35, protagonist of the latest maritime accident in the Strait of Gibraltar, continue to reach the coast. Now in the form of microballs of hydrocarbons that spread over three beaches different from the Cadiz town of La Línea de la Concepción. Despite the fact that it was emptied of hydrocarbons, the remains that remain on the walls of the now sunken ship continue to pollute the sea.

On August 29, the Cadiz town of La Línea de la Concepción remained on alert. A ship loaded with fuel oil and steel bars collided with a methane tanker anchored near the port of Gibraltar. The gap that opened in the ship after the impact was 10 meters long and four wide, enough for the worst of ecological catastrophes to occur: the spill into the sea of ​​more than 400 tons of hydrocarbons.

several days later, the government of Gibraltar claimed to have removed all the content. Part of the fuel had already been spilled, but far from it, it caused the disaster that many feared. The stain of about two kilometers long reached the coast and the ship – split almost completely in half – was stranded in a sandbox just 700 meters from the coast known as Catalan Bay, very close to the Rock. She was at the expense of the vicissitudes of the climate of the area.

Given the forecast of strong storms – which are usually quite important in the Gibraltar area between September and October – and the important and variable currents that often occur at this point, the Gibraltar government made a decision. The last friday decided to sink it in a controlled manner, with an anti-spill barrier that is later removed. Since then, the government of Gibraltar warned that the filtration of hydrocarbon remains would be inevitable.

This is what has happened now. From the Andalusian Emergencies Group (GREA), they explain to EL ESPAÑOL that yesterday afternoon, Tuesday, scenario 1 was activated – which is the provincial phase – of the Emergency Plan for the Risk of Coastal Pollution (PECLA) . they had arrived microballs of hydrocarbons to three beaches of the coast from La Línea de la Concepción: Santa Bárbara, La Atunara and El Castillo.

“They are small microballs, small cookies of hydrocarbon remains. According to the analysis of the Ministry of Health, they are fuels and lubricating oils” and “everything points to the fact that they are the rest of the OS35”, GREA sources say, explaining that “due to the maritime storm, the remains that still remain on the walls from the sunken ship they can surface”.

Antonio Muñoz, president of Verdemar-Ecologistas en Acción, agrees with this. “Yesterday morning, around 10:30 a.m., hydrocarbon stains began to appear and they have moved with the easterly wind to the coast, but the currents –which are variants– spread them everywhere, depending on where those currents go”, says Muñoz.

Some stains that, as reported by the GREA, had already been detected by Salvamento Marítimo. “They saw a line of contamination in the sea and assured that they could reach the beaches”, they point out Once it touches the coastline, the cleaning work begins.

Level 1 of the contingency plan was mobilized yesterday afternoon at the same time that bathing was prohibited on the affected beaches. They spread out to 25 people focused on cleaning tasks to remove the remains of the spills. At the moment, it is unknown how long they will continue to arrive, but the history of similar accidents shows that it could happen for months.

Muñoz remembers one of the events in 2007 with a ship called New Flame. According to agencies such as Europa Press, the ship – loaded with 700 tons of fuel and 50 of diesel – collided with an oil tanker, causing discontinuous dumping of material for almost five months.

“We have been monitoring since August 30 and we will continue to do so as long as there is a risk with the ship,” they say from the GREA. Furthermore, they insist thatas long as there is material inside and there is a storm, it is possible that it can continue to arrive [a las playas]. We maintain vigilance and do this cleaning at the moment it touches the coastline that is our responsibility”. A follow-up that, they say, is daily.

For his part, Muñoz acknowledges that “the fuel is very striking. Probably one ton is capable of staining a kilometer of beach”. However, he is sure that “there are going to be many more spills, because this tends to drag on over time.” 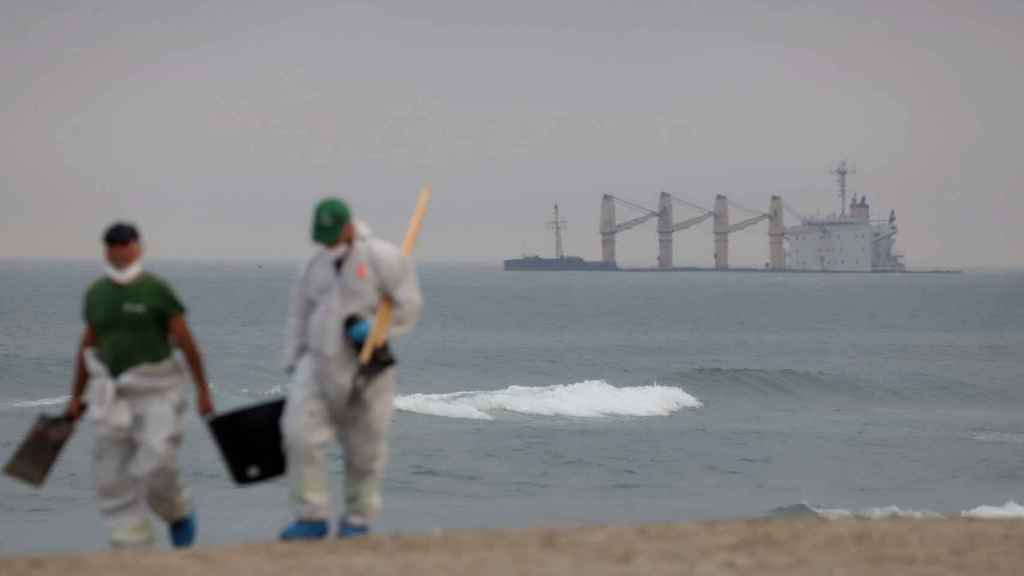 Municipal workers on the Santa Bárbara beach in La Línea.

In addition to the obvious risks to health and the possible impact on the food chain – through marine resources – these small discharges have a significant impact on marine biodiversity. So much so that, after the loss of fuel in 2008 from the ship Fedra in the Algeciras area, “The Alborán fishing in that December could not be done, because there were hydrocarbons in the area of ​​the Strait”Munoz recalls.

Likewise, remember that the area of ​​the accident is an enclave considered to be Special Conservation Area of ​​the Natura 2000 Network –the environmental protection of the European Union– for its high ecological value. In fact, there is a species of limpets that is in danger of extinction – with the same protection as the Iberian lynx – and that is already being affected by the arrival of the remains of material from OS35.