Over the past two years, Microsoft has released a host of new tools and technologies to help developers, including those at Microsoft, create “the next generation of apps.” Microsoft has something planned for all app creators, whether they are non-professional developers or expert and seasoned developers.

And executives are convinced that these types of applications, in large numbers, are exactly what customers need today, especially in this age of hybrid working. But is there an overall strategy that ties it all together?

We got a glimpse of what Microsoft was trying to do from this Microsoft marketing slide from a few years ago: 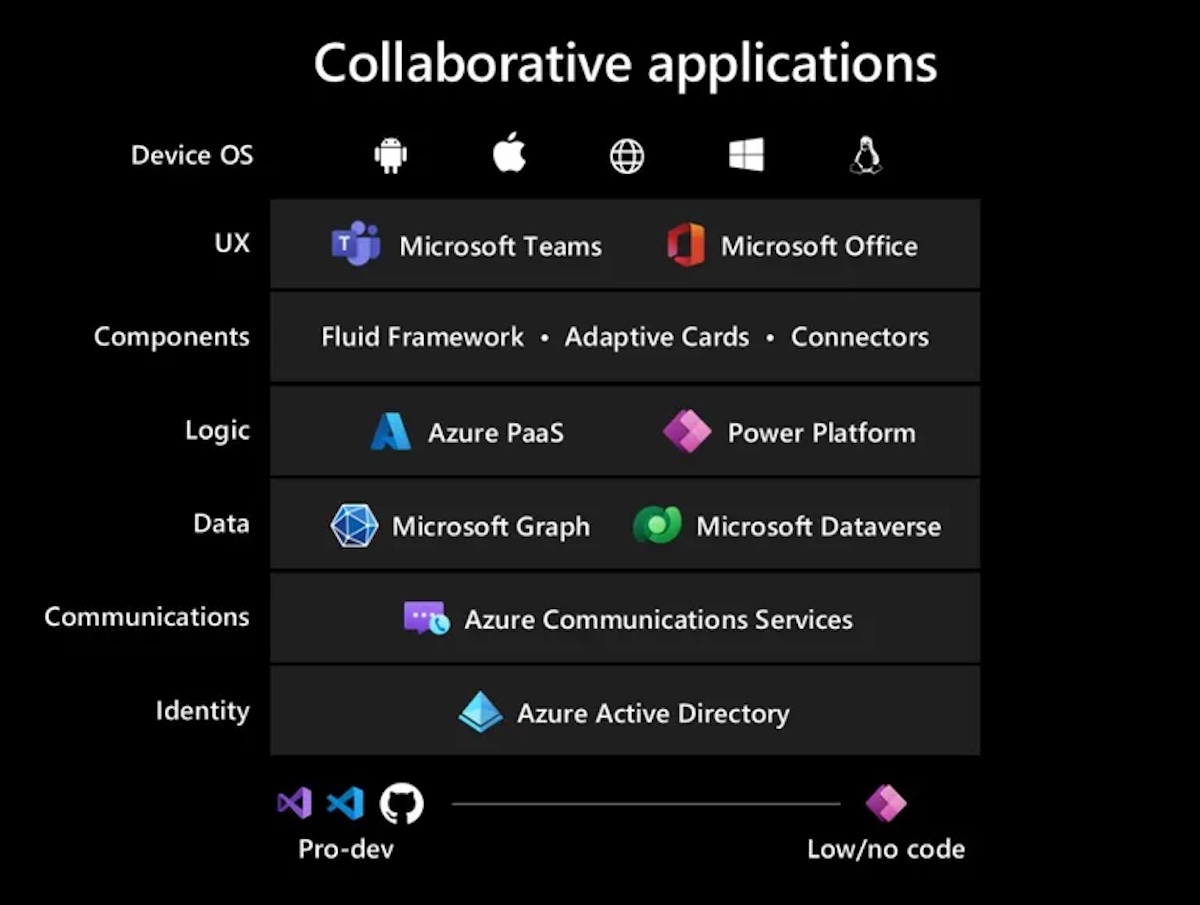 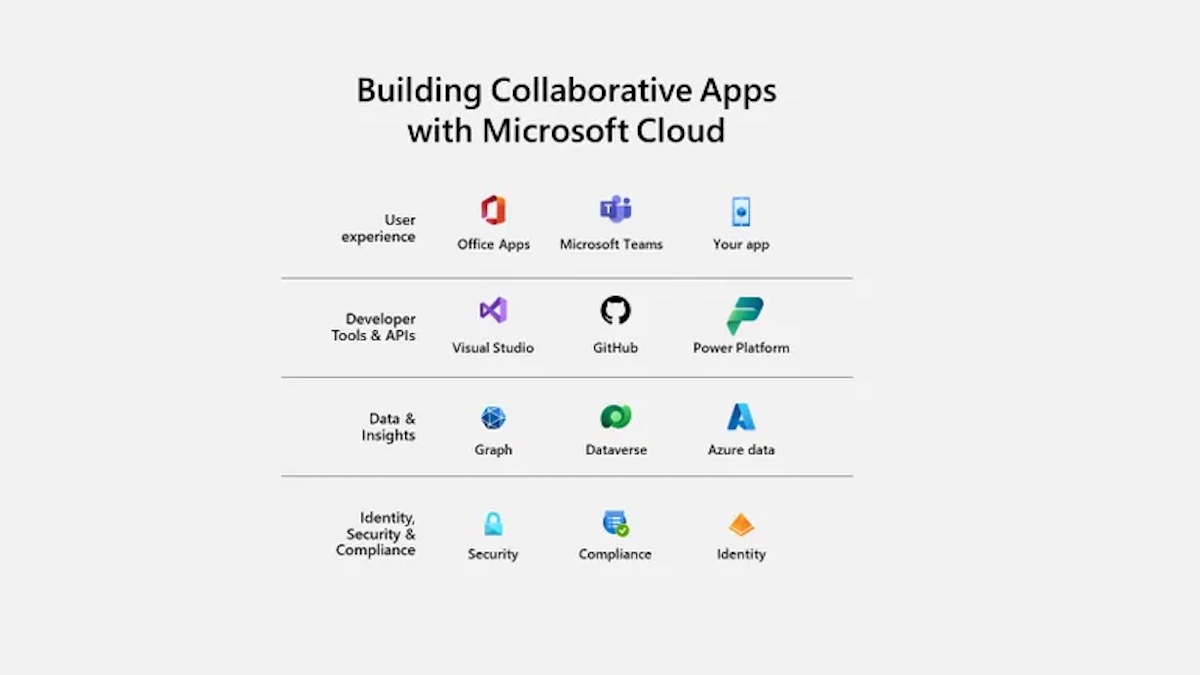 Microsoft has variously described a concept called “Collaborative Apps.” When Microsoft executives first used the term, team apps seemed to be apps designed for use within Teams and acquired from the Teams app store.

How are developers and users supposed to make sense of this evolving vision of collaborative applications?

Before the first annual Microsoft Power Platform conference kicked off on September 20, I had the opportunity to speak with Jeff Teper, the newly appointed president of collaborative applications and platforms, and Charles Lamanna, vice President of Enterprise Applications and Platforms.

At the conference, Jeff Teper’s keynote is titled “Building Collaborative Apps with Microsoft 365 + Power Platform.” At the same time as the event kicked off, Microsoft announced a new “Power Up Skilling Program” to help individuals enter the low-code space through a three-month guided program, Cards for Power Apps and the ability to co-author with “co-authoring inside Power Apps” to simultaneously edit apps in real time using an Office-like experience. New maps (coming “soon” in public preview) and the ability to co-create (coming next month in public preview) are yet more pieces of the collaborative app puzzle.

A collaborative application, in its simplest form, “is an application that helps people work together on a business process,” said Jeff Teper. A business process can range from submitting a schedule to filling out a form (as well as much more complex and advanced interactions).

Developers can use whatever tools they are comfortable with to write a collaborative application. Low-code tools from the Power Platform family are great, as are Visual Studio, TypeScript, JavaScript, and other professional development options. And they can connect to data sources from Microsoft and its partners and competitors using the Microsoft Graph programming interface, the Dataverse common data service, and Azure data. Fluid Framework and Loop synchronization components, adaptive cards, custom connectors, and Azure Communication Services — the chat and meeting features that Microsoft uses in Teams — are other optional items available to developers. Collaborative apps can be integrated with Teams, Office, Dynamics, and/or custom business apps.

Central to the evolving vision of Collaborative Apps is the Power Platform, Microsoft’s collection of low-code tools that aims to turn business users into developers. (Microsoft officials are positioning Power Platform as a key part of its all-out Microsoft Cloud vision and strategy, too).

“We are not inventing our own development tool for Office or Microsoft 365. We are betting on the Power Platform,” said Jeff Teper.

It is in this context that the announcement regarding co-authoring in Power App Studio falls. This feature uses the same underlying infrastructure that enables co-authoring/co-presence in apps like Word and PowerPoint, he noted. And at the Build conference earlier this year, Microsoft unveiled collaboration controls in Power Apps, which let developers drag and drop Microsoft 365 collaboration features, like chats, meetings, files and Teams tasks, in custom apps built with Power Apps.

The tech company is experimenting with these new app building models on its own, said Charles Lamanna. Viva Sales, the first “role-based” Viva app designed to help salespeople capture data and integrate it with Teams chats, calls and Outlook messages, is a prime example of a collaborative app, he said. declared.

“We practice what we tell our customers,” adds Teper. “The model we’re proposing is to use the data in Microsoft 365, to use Office as a sort of shell, but to use Power Platform to build the business processes. This is how we built Viva Sales. »

Charles Lamanna says Microsoft learned the best way to build an app inside something like Teams. And “copy-pasting a browser-based app like an iframe into Teams,” while possible, isn’t the best option. More interesting things happen “when you take some sort of big, monolithic web application and deconstruct it into a lot of smaller workflows and micro-applications for Adaptive Cards.” By assembling the apps in this way, “engagement skyrockets because that’s how people are used to responding to messages and emails,” he said.

Roads lead to the cloud

As all paths at Microsoft today lead to the Microsoft Cloud, no definition would be complete without some insight into how the Cloud platform fits into the Collaborative Apps strategy and vision. Microsoft’s argument is that by building on the full Microsoft stack, developers and customers will benefit from the built-in security and governance capabilities that come with it.

Jeff Teper calls for action in the following way: “Build collaborative applications with Power Platform and, where useful, integrate them with Microsoft 365Teams, Office, etc. And you’ll get better, more manageable apps faster. »