Don’t say “romanticism”, say ‘Holidays in Rome’. Since it hit theaters in the early 1950s to the present day, in which it enjoys its eternal youth on streaming and VOD platforms, the feature film directed by William Wyler —after Frank Capra left the project , but that’s another story—hdone, and continues to make viewers of several generations sigh.

Beyond its multiple awards —including three Oscars and a Golden Globe—, if this Paramount Pictures production remains an enduring landmark within the prolific romantic comedy genre It is thanks to a charming and perfect cast, a story that exudes tenderness and humor, and an incomparable geographical setting that brings an extra magic to the whole.

But ‘Roman Holiday’ could have been radically different in terms of its visual treatment, since the studio’s original intention was to shoot the film on its Hollywood soundstages; an idea that completely broke the schemes of a William Wyler that he considered —and rightly so— essential to film on real locations.

Wyler’s insistence led to an agreement with Paramount to considerably reduce the budget in exchange for moving the shoot to Italy. Something that, in addition to shaping the first American film made entirely in the European country, involved two changes that completely changed the final result that ended up reaching our screens.

The first of these was related to its female lead. The economic cuts made the then unknown Aubrey Hepburn land in the role of Anna, with which he came to outshine a Gregory Peck who saw in his role as Joe a catapult to the Oscar. Hepburn, who according to gossips was unable to cry when ordered by the director, won the coveted statuette – in addition to the Golden Globe and BAFTA. Peck didn’t even get nominated. 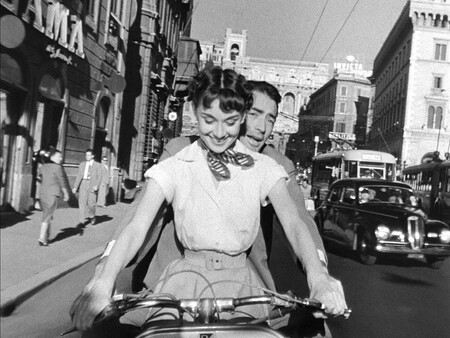 Although this was not all. Originally, ‘Roman Holiday’ was going to take advantage of the vibrant saturation of Technicolor to capture the idyll between the journalist and the princess. But one of the sacrifices that Wyler had to make to shoot in the Italian capital was to photograph the film in a black and white which, thanks to the directors of photography Henri Alekan and Franz Planer – Oscar nominees – raised the romanticism factor even higher.

all these settings did not prevent the budget of the feature film from rising to figures estimated at 1.5 million dollars, calculating an expense of about 700,000 dollars above the forecast. Numbers that, on the other hand, are not scandalous if we take into account that, in addition to a spectacular reception by critics and the public, raising $165,000 during his first week at Radio City Music Hall in New York and closing his journey in the box office with 12 million in his pocket.

But box offices, cuts, millions of dollars and “happy accidents” aside, what will truly prevail in the collective memory are the two hours of charm, fascination and what we know as the “magic of cinema” condensed into a classic to go to over and over again when the day goes wrong and we need to calm the soul.