The new generation of AMD processors for laptops is here. At least in part. The company led by Lisa Su has just introduced the chip vanguard with which it begins to shape the family of solutions for laptops that will be definitively consolidated in 2023.

microprocessors Ryzen and Athlon 7020 These are the proposals that AMD will compete with in the affordable laptops that will hit stores in the coming months. As we are about to discover, they offer us several very interesting features, and, in a way, they prepare us for what will come in 2023 when this brand launches the 7030, 7035, 7040 and 7045 series. This is what these new ones promise us. CPUs.

The Ryzen 5 7520U, Ryzen 3 7320U and Athlon Gold 7220U processors, identified by AMD with the code name ‘Mendocino’, have been tuned by AMD engineers to deliver competitive performance in entry and mid-range laptops. On paper the most ambitious of these chips is the Ryzen 5 7520U, and the most modest is the Athlon Gold 7220U. The Ryzen 3 7320U is only slightly slower than the Ryzen 5, but offers the same balance of cores and threads (threads), so its performance should only be slightly lower.

In the next slide AMD anticipates that in 2023 the other series of microprocessors for laptops will arrive that will shape your portfolio for the 2022-2023 academic year. The 7030 family chips will be targeted at affordable, lightweight notebooks; those of the 7035 series, to premium equipment; those of the 7040 range, to the most sophisticated ultralights; and finally, the 7045 series to gaming and content creation laptops. 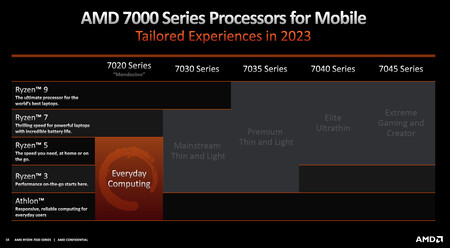 The microarchitecture on which AMD engineers have fine-tuned the Ryzen and Athlon 7020 processors is an improved version of Zen 2, although this does not mean that the series that will arrive in 2023 will also use it. In fact, we are sure that at least some of them will be implemented on top of Zen 4. On the other hand, these chips are being manufactured by TSMC using their 6nm photolithography, they have been designed to coexist with LPDDR5 memory chips, they incorporate a maximum 4-core and its TDP fluctuates between 8 and 15 watts. 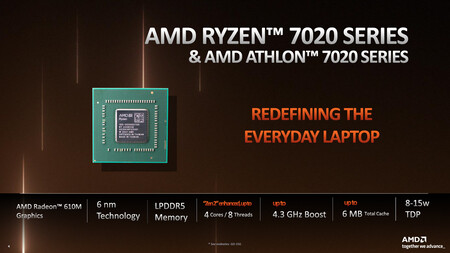 We arrive at what is undoubtedly the great promise of these processors: they offer us up to 12 hours of autonomy. Not bad at all, especially if we consider that the laptops that will incorporate them will have an affordable price. In any case, it is something that we will check as soon as we have the opportunity to thoroughly analyze one of the first teams that will bet on a Ryzen or an Athlon 7020. 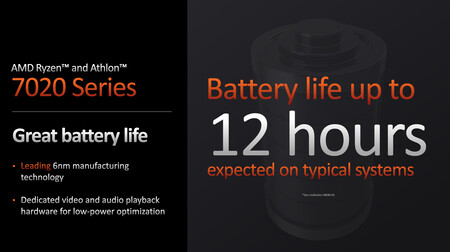 When they talk about the performance of their processors, both AMD and Intel ‘sweep for home’, so we prefer to collect their promises in this area with great caution. In any case, according to AMD, its Ryzen 3 7320U is up to 31% faster than an Intel Core i3-1115G4 in PCMark 10, up to 58% faster in Cinebench R23, and yields up to 80% more in 7-Zip. There it is. Once again, we’re quarantining this performance until we have a chance to check it out on our own test bed. On the next slide we can see some of the technologies introduced by AMD in these microprocessors to increase their competitiveness compared to their proposals from last year. Some of the most relevant are a dedicated USB channel which is involved in the security layer implemented by Microsoft in Windows 11, the possibility of carrying out fast battery charging or native support of initialization using WoV technology (Wake-on-Voice) using Alexa or Cortana voice assistants. 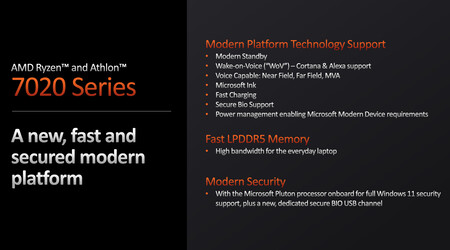 On the other hand, the graphics integrated in these CPUs are the Radeon 610M with RDNA 2 architecture. According to AMD, this graphic logic is enough to give us a sustained image rate of 60fps at 720p in games like ‘League of Legends’, ‘DOTA2’ or ‘Counter Strike: Global Offensive’. For game enthusiasts these features will not be enough, so they will only fit for those users with modest demands who play occasionally. 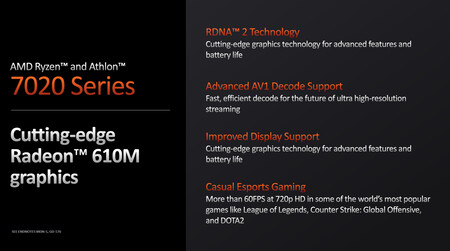 The first laptops equipped with these CPUs will arrive in October

AMD has confirmed that the first laptops to feature Ryzen and Athlon 7020 processors will be Lenovo’s Ideapad 1, HP’s 17″ Laptop PC, and Acer’s Aspire 3. They will be available during the last quarter of this yearand presumably after them will come more similar proposals from these and other brands.