Microsoft hasn’t announced when Windows 11 22H2 will arrive, but according to The Verge the update will be available tomorrow, September 20. It is a version that promises many improvements for an operating system that, despite its aesthetic refinement, still feels unfinished by many users.

And, precisely, those from Redmond have been improving it little by little. The first big update came earlier this year, bringing improvements to the taskbar, a new notepad, and more. Now it is the turn of the second, which among the novelties will present a new Task Manager with an Efficiency Mode.

One of the characteristics of Microsoft operating systems is that some parts take years and years to update. Some Windows 95 icons, for example, lived until recently in Windows 10. Something similar has happened with the Task Manager. Most of its elements come from Windows 8.

Now, however, Microsoft has not only decided to renew it visually to make it consistent with the entire system, but has also added new features. On an aesthetic level, the system information tabs have been relocated and the Fluent UI style has been adopted. At a functional level comes the Efficiency Mode.

As Windows users we should know that some applications continue to consume system resources even when closed and add no value. In this type of situation, what happens is very simple: we have fewer resources available for the applications that we do want to use.

One of the easiest ways to free up resources (processor, RAM, disk, and network usage) is to use Task Manager to kill processes. However, this is not a solution that always works. “Killing” processes could cause problems in our system and make certain programs not work.

The Redmond folks have come up with an alternative: limit the resource use of these processes to prevent them from stressing our computer with Efficiency Mode. They’ll still work, yes, but they’ll have a lower priority and run more efficiently thanks to Windows’ EcoQoS quality of service level.

How to use Efficiency Mode in Windows 11

Now that we know the essence of this function, let’s see how it works. Once you’ve upgraded to Windows 11 22H2, open the Task Manager and click on the tab processes and click on the desired column (CPU, memory, disk, network) to change to ascending order and identify which consumes more resources. 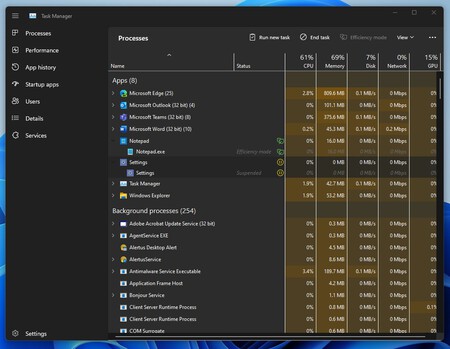 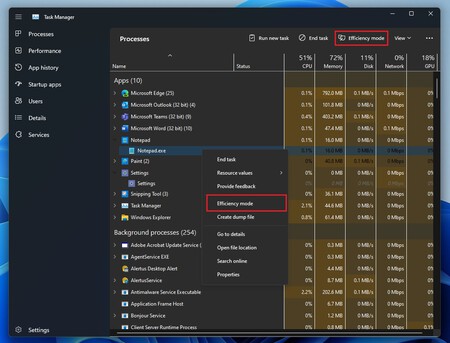 Choose a child process or an individual process and click the “Efficiency mode” in the upper right corner. If the button is dimmed, it means that the function is not available with that process, because it is considered by the operating system as a priority for its operation.