A whole generation of gamers wanted to be pirates by having a great time with the Monkey Island saga, whose sixth installment (Return to Monkey Island) lands today on PC and Nintendo Switch. But, let’s remember, we are not in VidaExtra so let’s count how close there was Ron Gilbert’s magnificent franchise of becoming a movie. And no, we’re not talking about ‘Pirates of the Caribbean’.

‘The Curse of Monkey Island’ is a film whose existence, in fact, was not confirmed until a special edition of the first two video games came out in 2011. On the disk we found some storyboards and concept art of the tape that never managed to materialize since the project was canceled at a fairly early stage.

That coupled with the fact that it was taking in secret. But just because something is secret doesn’t mean people don’t talk about it. In fact, back in 2003, was Dominic Armatothe very voice of Guybrush Threepwood in the third installment, one of the first to confirm that something moved at the time:

“The most I heard is that there WAS a script in development, but not anymore. There was a department somewhere in the great Lucas empire tasked with developing scripts for some of the more animation-oriented LEC properties, but the department was shut down in the big shakeup of… a year ago? Sure, this is old information so the project could have been resurrected, but the rumors that there was a Monkey Island movie in development aren’t entirely untrue.”

Looking for the next Toy Story

We’d have to go back a few years, to the mid-’90s when, after the success of Pixar’s ‘Toy Story’ (which was spun off from Lucasfilm in 1986), all the studios wanted his big animated film with computer generated graphics. This also included the “Lucas empire” who saw in ILM the great opportunity for it.

The idea was simple: develop ideas and concepts for animated films, sell them to other studios and production companies and help them materialize these projects. One of the artist members of the “committee” in charge of it was David Carsonwho would become the film’s director.

A fan of video games and after consulting with his son, Carson came to the office of Jim Morris, president of ILM, with the idea of ​​a movie about an aspiring pirate named Guybrush Threepwood, spirits and, above all, grog. Morris, unfamiliar with the games, suggested that he take the idea to Amblin, the gaming company. steven spielberg.

Thus, Carson got down to work and created the treatment for the film as an adaptation with changes, here and there, of the story but following more or less the main lines of ‘The Secret of Monkey Island’ in a condensed way: one test instead of three, not so many melées in Melée Island, etc.

But the film would evolve into something different in what the writers arrived Corey Rosen and Scott Leberecht to prepare the treatment that they would lecture with Steven Spielberg. In this new version, Threepwood goes in search of a treasure in order to pay the syndicate fee and become a great pirate. Beside Elaine They will explore the island as they escape the stalking of LeChuck and his men. 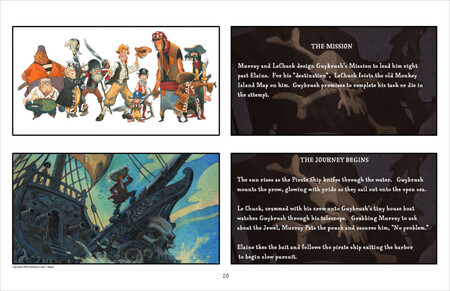 It’s was what they presented to Spielberg:

“We flew into Amblin with Patty Blau and met up with Steven. The first thing he said to me was “I told George years ago that he should make Monkey Island into a movie” so I knew he had a pretty easy pitch ahead of him. After that, Steven suggested that Patty meet with two of Amblin’s producers to see if we could pull it off.”

With that first go-ahead, from ILM they got to work to prepare the story… that was going through strange becomings in what was no longer a solo adventure to something much more choral in which the film became a story about LeChuck trying to unite all pirates, living and dead, under one flag Horror.

A) Yes, the movie It started with the theft of The Eye of Monkey Island., a great gem. Obtained by LeChuck, he will lose it in the jungle when he is chased by a pack of angry monkeys. After a confrontation with Elaine, LeChuck devises a plan, and to do so he needs a sucker. 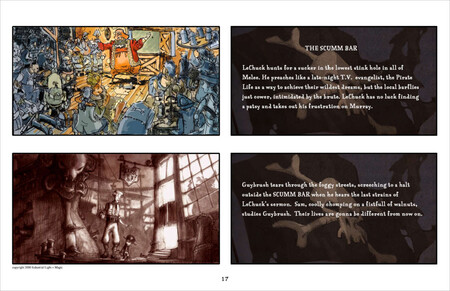 “The story began to take a different turn. It became more of a team, a gang of pirates that Guybrush recruits, so it became less of a solo adventure. Our original script was basically Guybrush and Eleaine on an Odyssey and LeChuck [de malo]. It was very simplified, it was like ‘After the green heart’. [La nueva historia] It was about a young idiot Guybrush Threepwood who wants to be a pirate but doesn’t really know what it is. So our goatee-scratching analysis for the story is what does it mean to be a pirate? Gurbrush thinks of piracy as a fun adventure, but then he crosses paths with LeChuck, who is a demon pirate.

A challenge that was added to that of turning a character like Threepwood into a movie hero. Something that caused headaches for the team… and that was found in Steven Spielberg a pretty major impediment. Carson recounts the meeting where things went wrong.

“We met in Steven’s office and the first thing he said was that the main characters shouldn’t be human. Instead, he suggested that we make the movie about the monkeys on Monkey Island. Everyone nodded but my heart stopped. what the hell? We had been working for many weeks on a story based on the charm and humor of the games and Steven wanted to throw it all away and make a new movie about monkeys? He was absolutely confused.

“The following week I met with Jim at ILM and told him I didn’t know where to go with the project. I didn’t have a script where the monkeys were the protagonists and I didn’t think that Steven would be interested in financing such a film. Certainly, people who went to see the movie for their love of games would be disappointed. And it was clear that Steven was not prepared to finance a film based on our current story.” 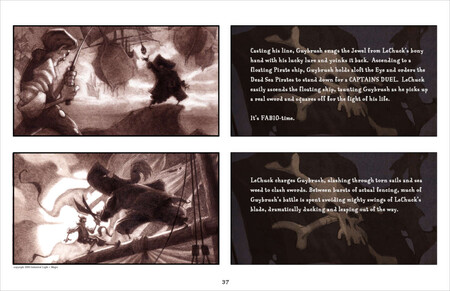 Thus, ‘The Curse of Monkey Island’ lost its moment and, little by little, was left in the limbo of stagnant projectsyes It had been there for a while when in 2001 the entire company was restructured and that part of ILM was dismantled, ending any small hope that we would see the adventures of Guybrush Threepwood on the screen.