One of the most important tasks of cinema, and above all of cinema that is screened at festivals, is that of scandalize us, make us see the corners of society that we would never approachstand face to face before a mirror of reality that can reflect attitudes or situations that give us true and absolute disgust. And that is the word that best defines ‘Sparta’.

Throughout its 100 minutes, restlessness and disgust take over the seats hopelessly while we watch with impunity a pederast managing to set up a judo school in which children in their underwear are always by his side, showering with them and taking pictures of them to observe them later. Many people have left the screening saying that there is no controversy because it does not teach anything. But The terrible thing about Ulrich Seidl’s film is not what it teaches, but what it does not teach.

Until the last minute there were doubts about whether ‘Sparta’ was going to be screened in San Sebastián or, on the contrary, it would become an ‘A Serbian film’, which would only increase its mysticism. Let’s remember that the screening of the Austrian film was banned at the Venice Film Festival after Ulrich Seidl was accused of exploiting Romanian minors during filming and not properly explaining to parents what the film was about. It would be fine if the movie were a shepherd boy taking care of his cows, but it turns out that the film is about pedophilia.

In fact, what ‘Sparta’ intends is to raise a false debate: Would you leave your children with a violent but protective father or with a teacher who takes good care of them but is really a pederast? Seidl shows the dichotomy of this character both in his moments of weakness (taking photos of them in their underwear, rolling on the floor with them) and in his subsequent regret. If the idea was for us to feel sorry for a pederast, the shot was not very successful: since the cake is discovered, it is impossible to see the tape without the blood running cold in each scene. 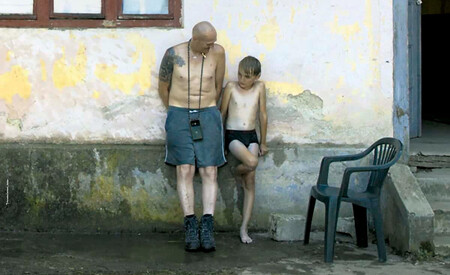 There is one scene in particular where ‘Sparta’ made me feel more uncomfortable than in any other movie in all the modern years of Zinemaldia: the teacher, after a judo class, decides to shower with the kids. They, only with their underpants on (wet, of course). He completely naked. Any regrets the teacher has afterwards, any attempt the film makes to forgive or excuse himwill live only in the head of its director, because it does not permeate at all.

So, of course, when the parents of the small Romanian town to which he has escaped find out what he is doing with the children, they have no choice but to go after him like those who went in search of Frankenstein’s monster. But unlike him, the character played by Georg Friedrich is guilty, and the simple hint that he may not be so guilty after all It is, frankly, disgusting.

The film may not show the professor having sexual gropings with the children, but it does include several sequences looking at his photos bare-chested and obsessing over one of them: the true terror of ‘Sparta’ is what we don’t see but know is happening in his mind. And not show the fait accompli it doesn’t make the film any less chilling or its protagonist any more exonerationable.

When we meet the small army in miniature, they are marginalized children in a Romanian community full of violence and in which they would not have any kind of future: The little affection they receive is treasured even if it comes from an unknown teacher. who teaches them judo and ends up founding a kind of sect with him as its leader. No matter how much he cries afterwards, he repents and screams, he is still an adult pedophile using the body of his victims for his own pleasure. “Disgusting” and “disgusting” are two words that fall short here.

It’s hard to rate a movie like this. I don’t think anyone can look at it and feel deep in their heart “Yes, it’s definitely a 7”. It is a work that cannot and should not leave indifferent, born from a wrong dichotomy and that raises disastrous debates, but whose provocative intention more than fulfills. Cinematographically it is powerful, and it has technical merit, enhancing the rural and strange environment, almost smelling the sorrow and despair of the children. But it doesn’t compensate.

I don’t know if I liked it. I can’t rate it. It is a film with base and flimsy form and that will make you feel a constant displeasure, but at the same time challenges you as an audience by showing the most hidden face of a mentally ill person who has tried to lead a normal life but is clearly not qualified for it. The movie never goes to the next level, but that it only makes it an even more awkward piece of work.

This is extreme cinema, not from the viscera or the gore, but from the sentimental and most painful level. She is disgusting, dirty, disgusting, morally disgusting. It is wrong from its base, the debates it raises should be non-existent, and there is a degree of confrontation and violence with the viewer, forced to see the actions of a more or less justified pedophile, which makes it impossible to see it, enjoy it and play it. a qualification as if it were one of ‘Star wars’. Everyone must draw their conclusions from ‘Sparta’. Personally, I am going to try to forget that I have seen the history of these sectarian judo classes. Although I never can.