The organization of Queen Elizabeth II’s funeral lasted several long years (and even went through the monarch herself) and, this week, the preparation was done all night to ensure that, this Monday, the last tribute to the one who ruled for 70 years the United Kingdom was running as expected: solemnly, without unforeseen events and with the British rigor that is required. But above all, in silence.

After all, the last state funeral in the United Kingdom was in 1965, the year in which Prime Minister Winston Churchill died, and it was necessary to ensure that, from the guests to the flowers, from the starting hours to the minutes of silence, nothing failed.

And nothing has failed. Even the simple delays were forgiven by the protocols that had to be followed. The first took place right at Westminster Hall, which closed two minutes after the appointed time. Chrissy Heerey was the last person to say goodbye to the Queen of England, as the room closed to the public and at the same time that Sarah Clarke, a member of the British parliament, closed the wake, being the last person to pass by the urn. .

With the wake over, it was time to finalize the remaining details before the procession that would take the urn to Westminster Abbey began. Through the corridors where thousands of people had previously waited to pay tribute to Queen Isabel II, hundreds of soldiers now passed from the various branches of the armed forces, who were going to join the procession, at an accelerated march and with a sense of redoubled duty.

On the banks of the River Thames and on the sidewalks of The Mall, hundreds and hundreds of people were trying to find the best place to watch the procession pass and pay their last respects to the queen. And the turnout was such that at 9:12 there was no room for anyone else in the places that the city of London had opened for the purpose, with thousands of people having to watch the ceremonies through the giant screens placed in Hyde Park.

Everything thought out in detail

One of the details that was dealt with – and what became more visible – was the exchange of the wreath that was placed in the urn covered by the Royal Standard flag. The wreath of flowers picked at Balmoral gave way to a wreath which, at the request of King Charles III, contained “leaves of rosemary, English oak and myrtle (cut from a cultivated myrtle plant from the Queen’s wedding bouquet) and flowers , in shades of gold, pink and burgundy, with touches of white, cut from the gardens of the Royal Residences”. Already on the card placed in the crown it could be read: “In beloved and dedicated memory. Carlos R.” Accompanying the wreath, the imperial crown, and the royal orb and scepter.

This is how the urn was seen when, at 10:42, it left Westminster Hall and the funeral procession – with King Charles III, accompanied by his brothers, children and nephew Peter Phillips – traveled the 200 meters to Westminster Abbey. . A moment when emotions were on edge – Prince Andrew seemed to get emotional as he passed the Cenotaph – and brotherly looks marked the day.

While the procession was taking place, the Queen Consort, Camilla, the Princess of Wales, accompanied by her children, Princes George and Charlotte, the Countess of Wessex and the Duchess of Sussex arrived at the Cathedral, who would join the family procession behind the urn to the altar.

George and Charlotte, aged 9 and 7 respectively, were the youngest members of the royal family to participate in the funeral ceremonies, having taken part in the procession to and from the Abbey and accompanied the Queen Consort and Princess of Wales on trips to car that accompanied the funeral processions.

A ceremony thought to the minute

On Sunday night, the royal family made public the Service Order of the religious ceremony. The order on which, according to CNN International, which cites a Buckingham Palace source, the Queen has been consulted over the years.

The Order of Service, which served as a guide to the ceremony, was prepared by the Dean of Westminster in conjunction with Lambeth Palace, officer of the London residence of the Archbishop of Canterbury. In turn, the King’s conductor, Judith Weir, has composed a new piece for the choir to be played at the state funeral called “Like as the Heart” and which will be sung by the choirs of Westminster Abbey and in the Chapel Royal at the Palace of St. James.

And even the hymns chosen for the ceremony had the queen’s approval, like Psalm 23, “The Lord is my shepherd, I shall not want,” which was sung in 1947 during the wedding of Elizabeth II and the Duke of Edinburgh. The psalm and hymn are known for the words “even though I pass through dark valleys, I fear nothing, for you are with me. Your rod and your staff comfort my suffering.”

The ceremony, which was attended by members of the royal family, politicians and other guests, was attended by around 2,200 people who began arriving at the venue at 8:00 am. Here, too, there were delays that, in the end, were not noticed, since when the urn arrived, all the guests were in their seats as per protocol. Including Joe Biden who, unlike other heads of state, monarchs and dignitaries, did not travel by bus, but in his official car (the “Beast”).

And at the appointed time, at 11:00, the Abbey choir rang out before the Dean of Westminster took the floor. It was the Reverend David Hoyle who was responsible for starting the religious service but it was the Archbishop of Canterbury who delivered the sermon that quickly echoed through social media, with the video being quickly shared by the Royal Family accounts.

In an emotional speech, Justin Welby recalled the promise Queen Elizabeth II made during her 21st birthday mission. “I declare before all of you that my whole life, whether long or short, will be dedicated to serving you and serving our great imperial family, to which we all belong,” the queen promised at the time.

“His late Majesty stated on his 21st birthday broadcast that his life would be dedicated to serving the nation and the Commonwealth. Rarely has such a promise been so well fulfilled,” said the archbishop, adding that “few leaders receive as much love as what we have seen”.

‘Rarely has such a promise been so well kept’

The Archbishop of Canterbury today gave the Sermon at Her Majesty The Queen’s State Funeral: pic.twitter.com/EyIgSCjtVd

The archbishop, who after the ceremony wrote on Twitter that presiding over the ceremony at the abbey was “the honor of a lifetime and also one of the saddest days”, he also said that Elizabeth II did not lead by position or ambition: “the example of her late majesty was not given by her position or ambition, but by whom she followed. I know that her majesty shares the same faith and hope in Jesus Christ as her mother, the same sense of service and duty.”

And since the sermon, the stipulated chronology has not changed a millimeter. Not even in the two minutes of silence. After the sound of “The Last Post” (which is used at military funerals in Commonwealth nations), the two minutes of silence followed, sequentially, with the ringing of dawn, the national anthem and the new procession of the urn with the royal family ago.

Behind the urn, in procession, followed King Charles III with Queen Consort Camilla, followed by Princess Anne and her husband, Vice Admiral Timothy Laurence, Prince Andrew, Prince Edward and Countess Sophie, the Princes of Wales with the children, George and Charlotte, the Dukes of Sussex, Earl of Snowdon, Peter Philips, the Duke of Gloucester, the Duke of Kent and Prince Michael of Kent. 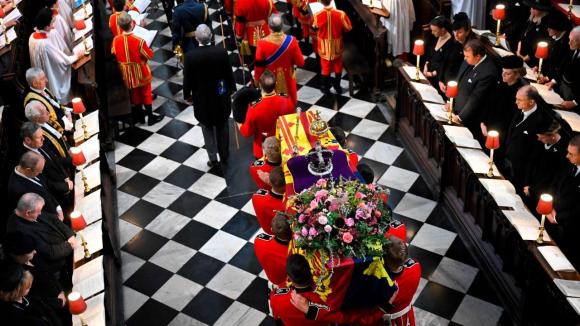 But before leaving the Abbey, Princes George and Charlotte, as well as their mother, Princess of Wales, Queen Consort Camilla, Duchess of Sussex, Countess of Wessex, and Princesses Eugenie and Beatrice, left the procession that walked through the streets of London. Behind the urn, followed only the same members of the royal family who made the route between Westminster Hall and Westminster Abbey. The rest followed by car, in a slow procession through the streets of London, where silence reigned, in which the urn was carried in a carriage pulled by the navy soldiers.

One of the most emotional moments of the procession happened when passing through Buckingham Palace, towards the end of the procession. The hundreds of soldiers, members of the Royal House and the royal family followed the evil one and all that could be heard – between the chimes of Big Ben and the cannon fire – was the march in the street of The Mall. And, at the door of what for 70 years was the official residence of the monarch, dozens of Palace employees were lined up, from secretaries to chefs, to pay a final tribute to the one who was not only queen, but also mistress. A moment that left no one indifferent.

The urn continued, without stopping, to the Arch of Wellington where the members of the royal family who followed in the cars were joined by King Charles III and other family members. There, Princes George and Charlotte exchanged a few brief words as if to break the solemnity that the moment demands. A breach of protocol that the queen would certainly forgive her great-grandchildren, after all, it is said, the monarch liked it when things didn’t go as expected.

The procession then proceeded to Windsor Castle, its final destination. In the farewell to central London, silence gave way to applause for the monarch who marked the United Kingdom for 70 long years. And, along the way, the State hearse, designed specifically for this funeral, was covered with flowers by those who watched it pass.

In Windsor, where it should arrive after 3:10 pm, the hearse will continue along the Long Walk to St. George’s Chapel, where the last religious service will take place. At 19:00, the funeral will take place, exclusively for the family, in the memorial chapel. There, Isabel II will be buried, with her husband and the sovereigns who preceded her. The memorial chapel is where the Queen’s father and mother were buried. An urn containing the ashes of the Queen’s sister Princess Margaret is also there.