It is reported that Malcolm and Claudinho have begun the process of obtaining Russian citizenship. According to journalists, this is done to reduce taxes. At the same time, they most likely will not be able to play for the national team, since they took part in the Tokyo Olympics. However, in the main national team of Brazil, the midfielders of Zenit never entered the field. CSKA veteran Vladimir Ponomarev called the news fake, and the former Dynamo forward Dmitry Bulykin explained why there is nothing to worry about.

The news about the possible acquisition of Russian citizenship by the Brazilian football players of Zenit Malcolm and Claudinho caused a serious outcry and at first glance seemed implausible. However, a number of sports Telegram channels have already reported the details of what is happening. Allegedly, the process has been launched, and the goal was to avoid part of the taxes.

It is curious that the players’ agent Luis Fernando Garcia did not refute the rumors, at the same time emphasizing that his wards like everything in Russia.

“I don’t have any information to share about this… Malcolm and Claudinho are completely satisfied with their position at Zenit. Including financial. They are the best players in the league and are happy to bring value to their club,” the agent said in an interview with Metaratings.

The failure of Norman, the removal of Fernandez and Zakharyan’s emotions: how Dynamo in the minority lost to Zenit in the RPL

Dynamo lost to Zenit in the tenth round of the Russian Football Championship at home. The meeting at the VTB Arena ended with…

At the same time, it is most likely that there is no question of changing sports citizenship, since both played for the Brazilian Olympic team at the 2020 Games in Tokyo. Malcolm took part in all six matches, and in the final he scored the winning goal against Spain and brought the country gold medals. Claudinho also entered the field on numerous occasions.

Following the winning of the highest awards at the Olympics, a call to the main national team of the country for the matches of the qualifying stage of the World Cup in Qatar followed, but Zenit did not want to let the midfielders go due to coronavirus restrictions. The debut in the first team in the end did not take place. But, as the legal company SILA explained back in 2021, the tournament in Tokyo was held under the auspices of FIFA, and thus both players are considered to be played for Brazil.

In national history, Brazilians received a Russian passport more than once and even defended the honor of the country. Defender Mario Fernandez, goalkeeper Guilherme and striker Ari followed this path.

The most unsuccessful was the naturalization of the former striker of Krasnodar and Spartak. As part of the national team, he played only two matches in 2018, playing with Germany (0:3) and Sweden (0:2), after which he was never called up.

Fernandez’s career in the national team turned out to be much more successful. The defender was taken for the World Cup in Russia, and he performed with dignity at the tournament. He showed himself especially brightly in the 1/8 finals with Spain. Then Mario was even noticed by the scouts of European clubs. And in the game with Croatia, the Brazilian, on the one hand, scored a saving goal in extra time, on the other hand, he did not convert his shot in the penalty shootout. After the World Cup, the footballer continued to be called up to the team, but last year he decided to concentrate on CSKA, and at the end of this season he completely left the country.

But most Russified Guilherme. He came to Lokomotiv in 2007 and has not changed clubs since. For the railroad, the goalkeeper spent more than three hundred matches. In Selesao, he was never called up, since the goalkeeper line of the five-time world champions was always maximally staffed. And Guilherme also fell out of sight of the coaches due to an injury received at the start of his career in the red-green camp.

In the Russian national team, he remained a substitute for a long time, but after the departure of Igor Akinfeev, he became the main goalkeeper in the Euro 2020 qualifying stage. He conceded eight goals, but at the same time managed to keep his goal intact in six meetings.

Now Guilherme is already 36 years old, he speaks excellent Russian and, as they say, at the end of his career he does not plan to return to Brazil. And the sports director of Lokomotiv, Thomas Zorn, is even ready to find him a place in the structure of the club. 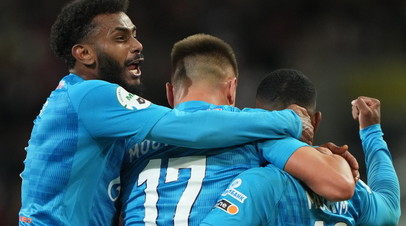 “Opponents give up before the game”: Silkin on the superiority of Zenit, the regression of Dynamo and Zakharyan’s problems with motivation

In many RPL matches, Zenit’s rivals surrender to the reigning champion before the game. This was stated in an interview with RT by the former head coach …

“He has a long-term contract, so the future was not discussed. Of course we’d like him to stay when he’s done. It will be possible to return to this story when he retires, ”Then24 quotes Zorn.

However, in the case of Malcolm and Claudinho, it does not seem to be about strengthening the national team, although it is possible that the RFU will be able to find loopholes in the regulations and attract foreign players. Otherwise, according to CSKA veteran Vladimir Ponomarev, paperwork does not make any sense.

“If they want, let them do it. It’s not bad. But I don’t understand why they need it? We still do not take part in international tournaments. We were removed from everywhere. It seems to me that this is not true. Some kind of fake. If they could play for Russia at the World or European Championships, the game would be worth the candle, but not like that, of course. There is no reason, stupidity, ”the specialist said in an interview with RT.

The version of tax evasion also does not look very convincing, since the salary of Brazilians should be taxed in the same way as that of any other Russian player.

However, according to the former forward of the national team and Lokomotiv Dmitry Bulykin, it is possible that the Russian passport will give other advantages.

“Someone changes citizenship all the time. There were Guilherme and Ari. Now there will be two more Brazilians. Why not? They want, they can, and Russian legislation allows it. If they fail to play for the national team, perhaps there are some other moments for which this is being done. The main thing is that they do not violate anything in this way, ”said the interlocutor of RT.