Scheduled yesterday Sunday at the March 26 stadium in Bamako, the return match of the preliminary round of the African football champions league between Djoliba AC and Deportivo Mongomo of Equatorial Guinea will finally be played this Monday, September 19 from 4 p.m. GMT , according to a decision of the CAF.

The second leg of the preliminary round of the African Champions League between Djoliba AC and Deportivo Mongomo of Equatorial Guinea scheduled for yesterday Sunday will finally be played this Monday, September 19 at the March 26 stadium from 4 p.m. This was decided by the Interclub Committee of the Confederation of African Football (CAF) during its meeting on Monday, which ruled in favor of the visiting team. A decision which already frustrates the Malian side which has nothing to do with the delay taken by Deportivo Mongomo.

In a letter addressed to the Malian football federation (Fémafoot), the interclub commission of the governing body of African football relies on article 11 of chapter IX of the regulations of the African football champions league to postpone the meeting. between Djoliba AC and Deportivo Mongomo from Sunday to Monday. This article states that ” the Caf can at any time modify the dates, the kick-offs or the places of the matches”.

As a reminder, the postponement of the match from Sunday to Monday is explained by the delay of the Equatorial Guinean team which only reached Bamako on Sunday around 11 p.m., for a meeting which should be held at 4 p.m. GMT . Djoliba AC, according to our information, has filed an appeal with Fifa. This does not prevent the reds from playing tonight, since we were told, the appeal is not suspensive. 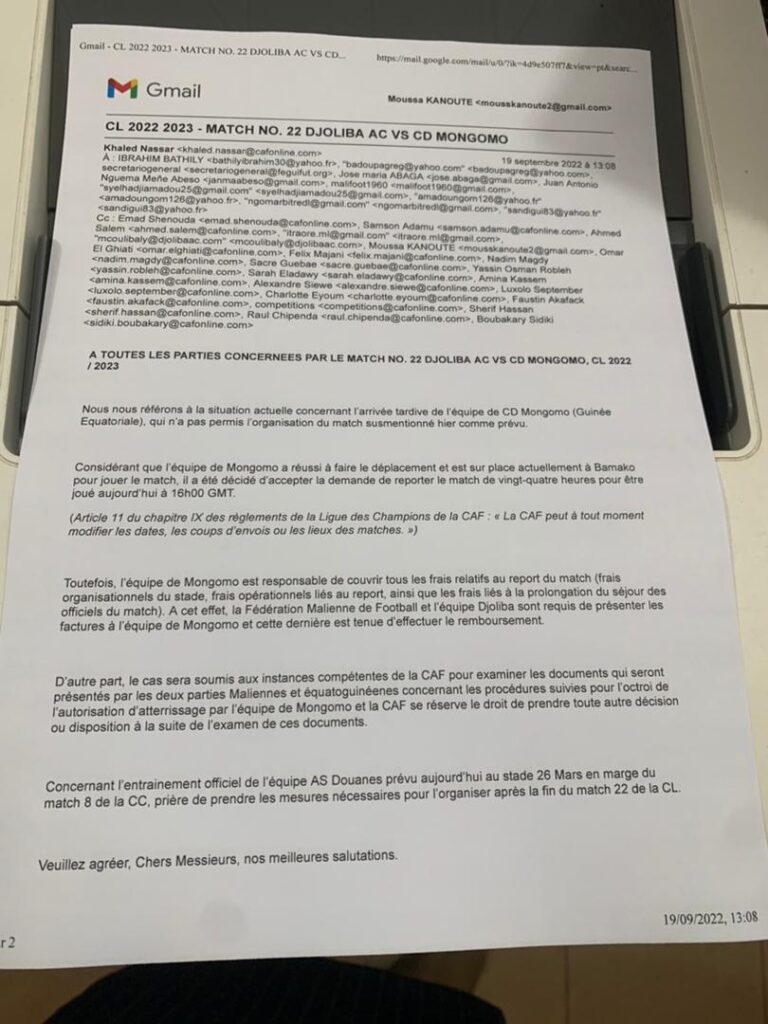