Perhaps, among all the headaches that not only a director of photography can face, but also the entire team of a film or television production, one of the most complex and demanding is shoot night scenes outdoors. A scenario that is a living example that a good part of the work on a shoot is reduced to the —not so— simple and plain resolution of problems.

The complexity of filming this type of fragment opens a wide range of possibilities when facing them that derives in an infinity of outfits different. Among them we can find logistical nightmares like the one experienced on the set of ‘Django Unchained’, in which DOP Robert Richardson and his team used gigantic cranes to illuminate a valley with overhead fountains simulating the light of the moon.

This type of lighting scheme, with light passing through some diffusion layer above the performers’ heads is just one of the many approaches to exterior-night. Next to him we can find backlights that generate silhouettes —like those well mastered by master Roger Deakins—, cons with hard light that highlight the contours of characters and elements, or planes in which the lighting is motivated by lights practices —like those seen in the urban odysseys of the Safdie brothers—. 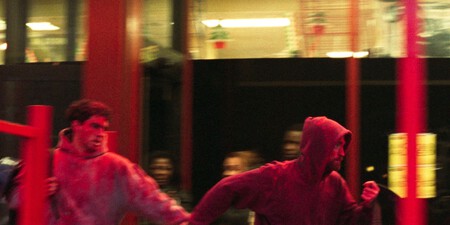 But, beyond exhibitions of organizational and budgetary muscle, there is a technique, whose origins go back to the beginning of the cinema and which was perfected until becoming popular under the name of “American night” —or “day for night” in the language of Shakespeare—consisting of shoot night scenes during the day.

As a general rule, getting the “day for night” effect to a successful conclusion —whose use in films like ‘Lawrence of Arabia’, which is much more refined, is truly spectacular—, is as simple as avoiding direct sunlight, underexpose the image when shooting and add a bluish cast either on camera or in the color grading process; this being the “rudimentary” version.

Over time, the bases of the “American night” were expanded through experimentation to cover its obvious shortcomings, being the combination of footage shot during the day and footage shot at night one of the greatest hits; as could be seen in some passages of the fantastic ‘Daggers in the Back’ by Rian Johnson.

In it, the director of photography Steve Yedlyn combined night and daytime footage, shot with exactly the same focal length and in the same position to obtain two identical frames, to be able to obtain the detail of the practical lighting of the windows and the porch of the house in which the film is set —shot at night— without losing information on the adjoining land of the building and on the characters that run through them —shot by day—.

But, when we thought that there was little left to innovate in this “American night”, the Jordan Peele, Hoyte Van Hoytema and his remarkable ‘Nope’ with an authentic revolution under the arm.

Van Hoytema and the infrared revolution

Almost as if it were a declaration of intent and a kind of metalinguistic element, Peele and Van Hoytema decided to shape their ufological epic halfway between horror and science fiction using large-format cameras; specifically IMAX Mk IV and Panavision 65 equipped with five and fifteen perforation 65mm film.

The DOP is no stranger to the big format, having signed impeccable works with him on titles like ‘Dunkirk’ or ‘Tenet’, both by Christopher Nolan. But, Why choose 65mm film from dozens of photochemical and digital options? This is how Van Hoytema himself explains it.

“When you shoot on 5-perforation 65mm film and see it in a theater, you see something you won’t see anywhere else. There is an unprecedented quality and depth of image and therefore that much more special. When you go to a even larger format, like the 15-perforation IMAX, the depth of color and image are even more impressive to look at.”

But having a sensitive material of these characteristics was not enough to overcome one of the biggest challenges posed by ‘Nop’. mold some amazing night scenes that have ended up being one of the great banners of the feature film.

“One of the biggest challenges of ‘Nope’ was thinking about how we were going to shoot the night scenes, which were almost all big set pieces. When Jordan and I went to locate at night in Agua Dulce, we saw that there was no light of any kind available , and we realized there was no way to convincingly light and photograph those expanses of land.

Of course, we could have shot a traditional day for night, but it has its limitations because you have to have the sun in an exact position. Or we could have tried using green screens and CGI, but even then the results might look a bit fake.”

The solution to the puzzle went through, as happened in ‘Daggers in the back’, merging different materials on the same plane. But the DOP took this even further, combining footage shot in infrared with footage identical in composition but shot on 35mm film lifelong.

“With the help of my friend Kavon Elhami, who runs a camera company, we bought two unused 3D-stereo camera rigs on which we mounted two cameras. One was an ARRI Alexa specially modified to capture infrared. The other was a camera from “Normal 35mm. Instead of lining them up for a 3D effect, we found a new way to do it so that both cameras would shoot the exact same image, one on infrared and one on film, so that each frame would overlap perfectly in post.”

In this way, Van Hoytema obtained, on the one hand, monochromatic infrared footage that, being sensitive only to wavelengths between 0.7 and 1000 micrometres, generated images of high luminance but in which the skies appear dark. On the other hand, the 35mm material had all the necessary color and texture information so that, when combined with the infrared footage, it would appear that the characters were being illuminated by moonlight.

Although on paper it may seem like a logical process and, to a certain extent, feasible once the puzzle has been cracked, it is a great technical achievement, since both cameras, lenses and sensors must be identical to get the same depth of field and to match focus changes. But once the color grading phase is over and after adding some other visual lighting effect, the result is simply brilliant.

The case of ‘Nop’ and Hoyte Van Hoytema is just another example that cinema and technological innovation are closely linked and that the noble art of telling stories in images, on many occasions, is still something similar to facing a gigantic puzzle to solve. And for that, many of us love it.