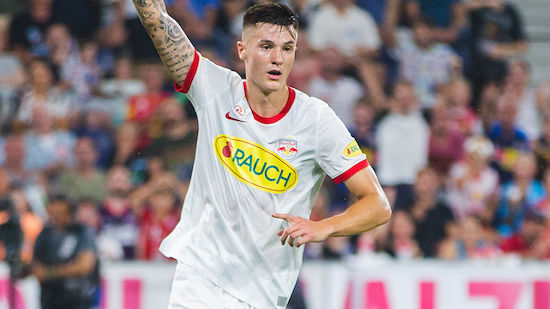 Concrete rumors surfaced for the first time on Monday morning, according to which RB Leipzig was preparing an offer for Benjamin Sesko. This put the Saxons alongside top international clubs such as Manchester United and AC Milan, who have also expressed an interest in the 19-year-old Slovenian.

But both the “Red Devils” and the Italian champions will look through their fingers, because the German Bundesliga side have agreed with Red Bull Salzburg on a transfer of the striker. This is reported by several media unanimously.

Only in summer 2023 to Leipzig

According to this, the top talent, as confirmed by Salzburg’s sports director Christoph Freund on Saturday, should still be on loan this season in the city of Mozart (read HERE >>>) and only move to the “big brother” in summer 2023.

According to “Sky” information, Sesko will sign a five-year contract until 2028 and flush around 24 million euros into the coffers of the local series champion. RBL would have liked to get the two-time Bundesliga goalscorer in the current transfer window, but Salzburg refused.

Nevertheless, the deal should be sealed as soon as possible in order to avoid a fate similar to that of Erling Haaland. The Norwegian superstar, now in the service of Manchester City, canceled Leipzig in the winter of 2020 and opted for Borussia Dortmund instead.

The transfer, like that of Timo Werner (read HERE >>>), should already be announced on Tuesday.