Autonomous delivery robots arrive in Zaragoza. On July 25, my colleague Javier Lacort echoed this information. The company Goggo Network has started a pilot project divided into four phases to operate in the Aragonese capital. This company is specialized in managing autonomous vehicle fleets. They are not manufacturers, but they do validate their safety.

Initially, two Goggo Network devices will operate on a single street, moving through foot traffic. Next, they will expand their number to 10 autonomous units, which will be distributed throughout the Zaragoza neighborhoods of Independencia, Plaza de los Sitios and León XIII.

If all goes according to plan, in the following weeks the number of available units will be increased to 20 autonomous robots. And, when the testing phase is over, the goal is to have 80 fully autonomous units moving through the streets of the city.

In addition to the Zaragoza project, Goggo Network also presented a similar plan in Madrid, but, for the moment, they have not heard from the City Council, which must give the go-ahead to begin operations, although the council was initially favorable.

After having some doubts about this type of distribution, we have contacted Goggo Network and Flipdish, a company associated as a support platform for the digital management of orders. Are these types of deliveries viable? What advantages do they have compared to a traditional rider?

Autonomous robots on the streets

So far Goggo Network has presented two proposals for autonomous robots for the street. The first of them was at the end of 2021. Then, together with Glovo, it was announced that the delivery company would use a large vehicle as a rolling and autonomous food truck.

The idea is that this robot can go from trade to trade filling its pantry and, along the way, act as a kind of prepared food vending machine. The pedestrian approaches the robot, checks on a screen what it offers inside and after paying by card obtains the desired product.

But what has been launched in Zaragoza has nothing to do with this system. The Aragonese autonomous robots will be much smaller “the size of a baby cart” in the words of Goggo Network, and will be used to distribute all kinds of products, not necessarily food.

The vehicles will circulate at an average of 5km/h but they can reach higher speeds, weigh about 45 kg and are equipped with all the necessary systems to overcome obstacles (LiDAR, cameras, ultrasound sensors, GNSS receivers) and algorithms to apply artificial intelligence to their journeys and learn from them, with the goal of becoming more efficient.

The robots will also have a closed space that will be opened by means of a code provided to the client, which guarantees security during delivery. In addition, they can be controlled remotely in the event of any type of unforeseen event that requires human intervention.

In fact, from Goggo Network they confirmed that this type of device can work completely autonomously, but also remote control remotely by an employee or in a mixed formula in which a human being only intervenes if the vehicle encounters an insurmountable obstacle.

One of the objectives of Goggo Network is that this type of vehicle can become another traffic agent, a hybrid device that can act as an autonomous vehicle or a pedestrian, depending on the situation that most interests you at any given time. In fact, they confirm that they are holding talks with the DGT so that, in the future, they can use the bike lanes, among other ways.

Before, yes, they need to make a intense mapped of the streets, to be able to obtain all the possible data and know the environment through which they will move to the millimeter. With its sensors and GPS positioning, it is a system similar to the one Bird uses to stop its scooters if they try to travel on the sidewalk.

At the moment, the operation of these autonomous robots is limited to pedestrian areas, but another problem arises: the pedestrians themselves. The radius of action of these robots is 1.5 kilometers and, in a pedestrian zone, this can become hundreds of potential obstacles that move unpredictably and that, without a doubt, can delay their progress.

Goggo Network does not find a problem here and ensures that, despite these possible obstacles, the delivery time compared to a riere “is very similar. Our robots work on an area that has been mapped and studied to the millimeter, so it is always capable of finding the fastest, most efficient and safest route to make the delivery”, they stress.

From Flipdish, they did tell us that this can become a problem in areas of special congestion of pedestrians, but they stressed that the robots “go along the curb next to the road, where they least bother pedestrians”, in the words of Germán Ortiz , your sales manager. In this way, the vehicle will encounter fewer pedestrians in its path and will have to stop fewer times.

Therefore, that there is a good coexistence between this type of device and pedestrians (and, where appropriate, other vehicles such as bicycles or scooters) is essential and represents one of the greatest challenges in implementing the technology.

Some doubts to clear

But these devices also come with a new problem. What happens to the riders? According to both companies, both services are complementary and allow both riders and autonomous robots to work hand in hand.

Flipdish suggests that restaurants will free their drivers from the closest deliveries, leaving their work for the longest and most distant routes. “At the moment, a rider pedaling will always take less time than the robot if the distance is great”, they pointed out to us. In addition, they will continue to be essential in those deliveries that you want to pick up from flats, since these autonomous vehicles are not capable of climbing stairs.

According to Flipdish, it is very likely that two types of customers will be created: those who prefer to receive food in their hands and those who do not mind going down to the door of the house if they are assured of an order that is better preserved than in the usual backpack of delivery men. .

“And let’s not forget that working with riders is still compromised for some companies that can also find a cheaper and faster means of transport in robots. It’s not surprising that Goggo Network points out that they take the same time, think that the journey it’s short and the robot is already waiting in the same restaurant, it doesn’t have to get to it,” explains Ortiz. 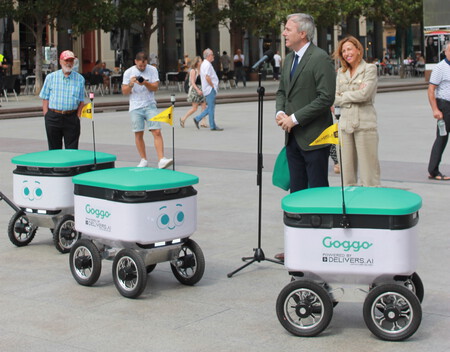 Presentation in Zaragoza of the Goggo Network project

What incentive do I have to go out to the front door of my house instead of having a rider ride it? According to Goggo Network, the great advantage lies in the certainty that the compartment in which the food (or any other product) is transported has not been opened by the way. In addition, they point out that these robots are not part of routes with numerous stops, so a very reliable tracking of the order can be done at all times.

Obviously, where these types of robots shine the most is in the controlled environments. In large areas such as factories, shopping centers, fairs or airports that have been previously mapped, that have fewer people to avoid and where there are no different floors to go to.

We will have to wait for the data collected in Zaragoza to understand if this type of autonomous robots make sense in our cities. What we do know for sure is that this type of project is raising expectations in other parts of the world.

The Ottonomy company, specialized in vehicles of this type, has just obtained a new round of financing of 3.3 million dollars. And “ghost kitchen” companies are also trying their luck on the campuses of some American universities.