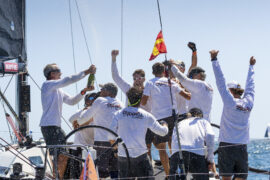 The Aifos 500, with King Felipe VI at the helm, finished in fifth position in the ORC 1 class

the boats Soho CaixaBank Theaterof Javier BanderasY baleariaof Mary Bover, they have been proclaimed this Saturday absolute winners of the 40th edition of the Copa del Rey Mapfrein which a hundred boats from a score of passes distributed in nine classes have competed in the three regatta fields of the bay of Palma.

The Aifos 500, with the king Philip VI at the top, he finished fifth in the ORC 1 class.

Teatro Soho, supported by the actor Antonio Banderas, completed a brilliant navigation during the six competition. The Swan 42 model boat (the same one with which it won in 2021) was already the best in the previous phase and this Saturday it celebrated its second consecutive title by finishing in second and first place.

Javier Banderas, owner of the Teatro Soho CaixaBank, expressed his satisfaction with the new success achieved: “We are in a cloud. This victory is a great success because it is a lot of hard work and it has not been easy despite what it seems otherwise. We have had regattas that We won by just a couple of seconds. I can’t describe the excitement on board, it’s unbelievable.”

Balearia-Team RCNP in the class of female crews I won the game to Dorsia Covirnof Natalie Via Dufresneand great favorite after reaching the Copa del Rey Mapfre as leader of the Iberdrola circuit.

María Bover, skipper of the Balearia, said that it was “very difficult” to win the title: “Our rivals were at their best. In the last regatta everything squared up really well for us. We are very happy. It is my second Copa del Rey as skipper and my first victory, I think I still don’t believe it. We’re going to enjoy it because I’m sure it’ll be very difficult to repeat it”, he said in statements to the organization of the Copa del Rey Mapfre.

In the “queen” class ORC 1, the victory went to the German boat Red Bendit, a rookie, as it competes for the first time in the waters of Mallorca. The boat of Carl-Peter Forster suffered a penalty that cost him the lead last Monday and lost several places in the standings. But he was coming back to seal his final victory in the last two tests, beating the Argentine From Now On, second, and to Estrella Damm Sailing Team of Luis Martinez Dorestethird.

“We have a very young crew and most of them have never sailed on a big ship before,” Forster said. “We got the crew together just for this season and it’s the first pole event they’ve competed in, and we’ve won. This is amazing. We never thought we’d be able to do that. It’s pretty amazing,” the skipper said, elated. Red Bandits.