aloha pokethe restaurant chain responsible for introducing the hawaiian dish par excellence in Spain, was founded long ago five years in Madrid. It all started when William Fountainmain CEO of the company was living in USA. “There I discovered the dish almost by chance, without knowing what it was and the truth I loved“, reveals EL ESPAÑOL. From there, the creator of the hotel chain began to consume the plate 2 or 3 times per week and, after seeing “that it was a healthy, fast and cheap dish”, he was encouraged to set up a business in which he was the absolute protagonist. Now, five years laterthe company specializing in the dish goes smooth sailing and already bills a whopping seven and a half million euros.

But the idea did not come out of nowhere. It all started when two friends of William They went to visit him: “I took them to the places that I liked. The typical, a bit of tourism.” At that moment the speculations and ideas about the possibility of setting up something similar in Spain. Although it all started half in jest, according to the CEO of the companyover time was taking shape until they set up the first store in the liberty streetin Madrid. However, although initially the three friends started, now he is the only boss.

The dish par excellence of this chain of restaurants, as its name indicates, is the poke. This is a hawaiian dish, with Asian and Californian influences, available for less than 10 euros.

And Aloha Poké, a specialist in it, offers more than thousand different combinations. In addition, it has options for all types of clients, from without glutenfor vegans, Without lactoserich in protein and free from sugars simple. Its gastronomic offer is wide, varied and dynamic, adapting to the Lifestyle and consumer needs. “Obviously we have to qualityIt’s about a raw product that you cannot mask it with batter, sauces or oils”, says Guillermo.

The pokeas a sushi plate, is made in steps. First, choose basewhich can be sushi rice, brown rice, quinoa, salad… Next, you add the protein: raw fish, salmon, tuna or chicken, marinated with a sauce. And finally, choose the toppingsamong which there are up to a total of 30 to choose from: fruits, vegetables, seeds, nuts, etc. In addition, the offer is completed with starters to share, refreshing drinks such as kombucha and homemade Hawaiian desserts.

Although initially he was given many returns to the namefinally stayed “Aloha Poke”. “Obviously, the word poké had to be there because it wasn’t known, so the first thing was to sell the product“, points out Guillermo. From then on, they began to think of words in English, in Hawaiian… until they came to “hello“. “It is not only a greeting or farewell, it is also a wish that you do well, a philosophy of life, a word that gives happiness“, Add. 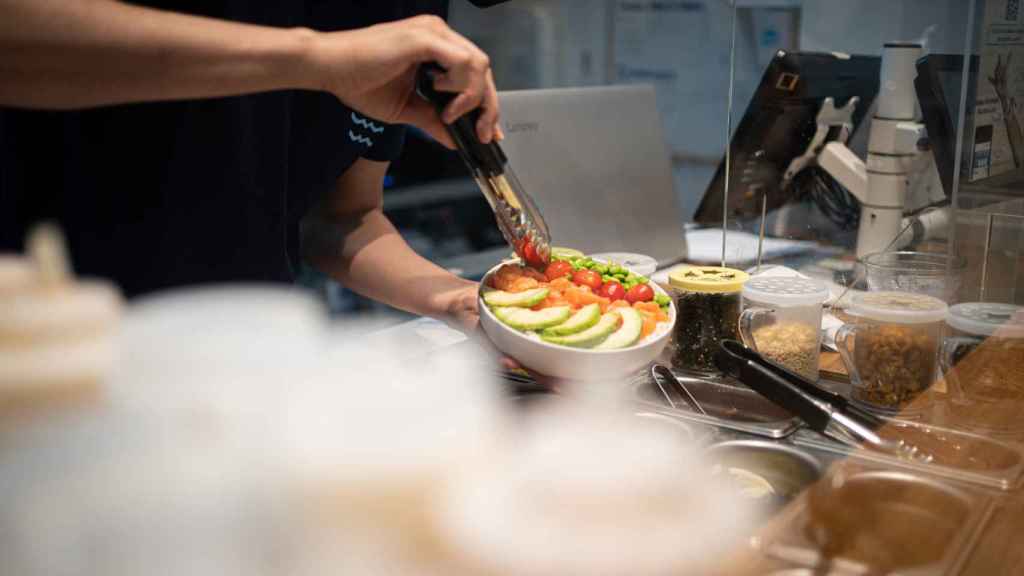 An Aloha Poké worker, preparing a bowl of poké.

In addition to being a healthy dish with ingredients raw and unprocessedit is a chain of restaurants that advocate the environmental Protection. “From the first moment we bet on sustainability, we want our philosophy to revolve around a healthy life stylenot just eating healthy,” insists Guillermo. Aloha Poké also collaborates with companies such as Auara, To Goog To Go to avoid excessive waste of food. Similarly, all its packaging is recycled plastic and many of them biodegradable.

For less than 10 euros

Despite being a dish with quality fooddoes not suppose an excessive cost, since for less than 10 euros and in a matter of minutes, you have the food done. “It is an option healthy, cheap and fast. It’s not like a salad that after five minutes you’re hungry, the poké fills you until night,” says Guillermo.

Another aspect to highlight of Aloha Poké is the design of the premises. “We wanted eating in our restaurants to be like a experience, not just a fast food restaurant“, he points out. The place is decorated in a beachy and tropicalwhere natural light shares the spotlight with surfboardspositive messages, urban art, vegetation and of course the poke bowls. Although there are several copies, Aloha Poké is different. The place takes you to a coast area being in the middle of a big city.

Regarding the type of client, it is office staff. Above all, workers who have a short break of an hour to eat something fasteither. “I have been one of those and there were hardly any healthy optionsthe majority were sandwiches, pizzas, Chinese and kebabs”, adds the CEO. The large number are customers who know what they consume, they know how to combine it, what time certain foods are eaten and also worry about the origin of these.

Although they currently have 150 employees and around 26 stores spread over 11 cities, plan to open some 6-7 restaurants this year, reaching 33 in Spain. However, they do not plan to expand the market outside of Spain. Despite this, it is true that they have always had it in mind: “For now we have Spain as our objective, to consolidate ourselves and reach all those cities that are missing“. 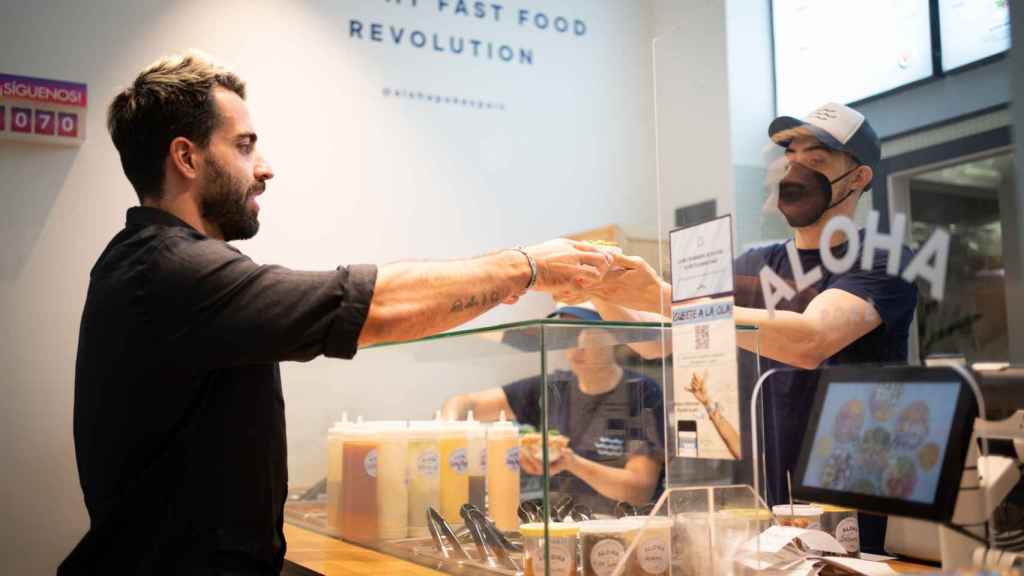 Guillermo Fuente, in one of the 26 establishments that the chain has in Spain, talking to a worker.

Regarding economic data, last year Aloha Poké invoiced 7.5 million euros with 150 employees. This year, however, they expect to end with a turnover of €10 million and an investment of 6 million euros in total.

As expected, all this effort pays off, as Aloha Poké has various awards. In 2019 they won the Hot Concept to Fast Service, the first time this award was given to a local poké. In 2020 he was one of the finalists of the National Marketing Awards in the Start-ups and SMEs category. In December of the same year the company obtained three awards in the Meraki Awards in the categories of Sustainability, Implementation and Adaptability to Covid-19 and Business Development. 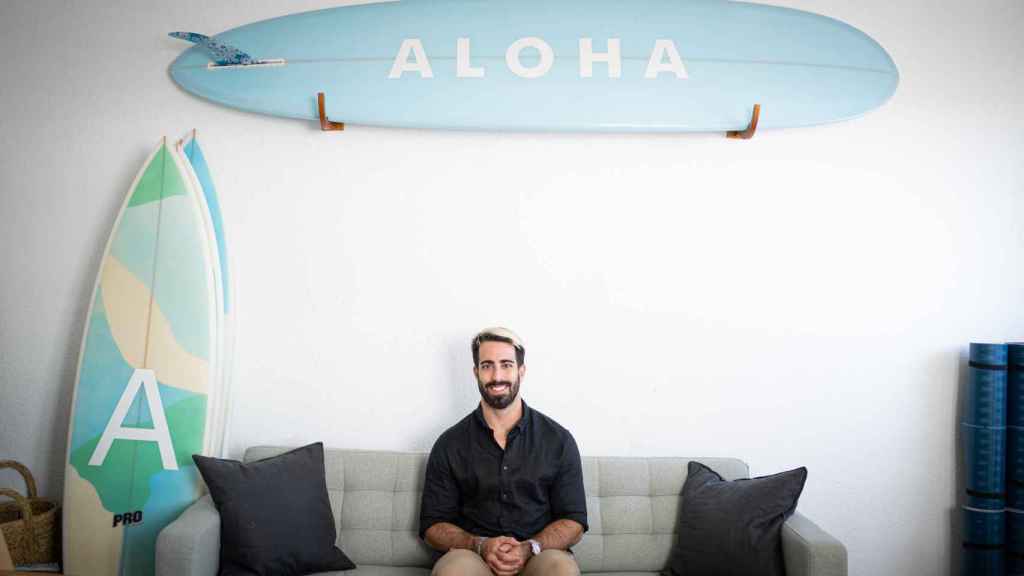 Guillermo Fuente, sitting in one of the premises decorated with surf motifs.

Guillermo Fuente manifests to EL ESPAÑOL feel excited with the reception that Aloha Poké has had over these five years: “It’s crazy, it’s a very nice feeling. It is a sign that we are doing things right, this values ​​your work“.