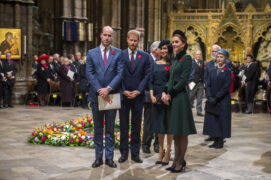 This Thursday, August 4th, Meghan Markle celebrates another year of life. the prince’s wife Harry blows out 41 candles, in a phase in which it is apparently calm, despite continuing to see its name in sensational and controversial news.

Since the separation of the British royal couple, a lot of ink has been floating around, namely about the former actress, who is, on several occasions, dubbed a “manipulative”. Also Prince Harry’s relationship with his brother, Williamwas talked about, as the older one seems to disagree with several decisions of the younger one since he joined Meghan.

Despite everything, the Duke and Duchess of Cambridge did not let the Duchess’s special date go blank. In Instagram stories, they shared a photo of her with the following message: “We wish the Duchess of Sussex a happy birthday“.