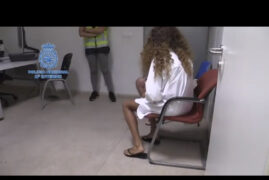 Constantine Gabriel Dumitru (47 years old) and Priscilla Lara Guevara (28), arrested at the Croatian border on July 18, accused of stealing 45 bottles of wine from the famous cellar of the atrium restaurant of CeresThey will spend today their first night in the prison of the cacerea capital.

This has been decided about 3:00 p.m. this Thursday by the Court of First Instance and Instruction number 4 de Cceres, which has decreed the provisional and communicated prison without bail for the two alleged perpetrators of stealing the select bottles valued at 1,648,500 euros on October 27.

The judge, after an oral hearing that lasted a little over an hour and in which the defendants did not answer the questions of the prosecutorhas decreed provisional imprisonment based “on the seriousness of the penalties that could be imposed, the high risk of escape and criminal repetition, existing, in the case of the man”, a requirement of a Court of Madrid for a robbery perpetrated in an establishment in the Spanish capital, according to sources from the cacereo court.

The two investigated – the Romanian-Dutch citizen and the former Miss Mexico – are charged with the crime of robbery with force in an establishment open to the public with the possible concurrence of two specific aggravating factors: the high economic value and the cultural and artistic value of the property. what was stolen, collected, as outlined in the prison order, in articles 235.1, 235.5, 237, 238, 239, 241.1 and 241.4 of the Penal Code.

The alleged perpetrators were arrested in Croatia during an international police operation after issuing the euro arrest warrant the Court of First Instance and Investigation number 4 of Cceres that instructs the case, which is still ongoing.

This was the robbery in Atrio: Swiss passport, wig, English accent and extreme kindness for a coup of two million euros

The bottles still don’t show up

The proposal for provisional prison without bail had been requested from the Prosecutor’s Office, which considered that there was an obvious risk of flight, an issue that was denied by the defense, represented by the lawyer Sylvia Cordoba. The lawyer has defended the innocence of her clients and has argued during the oral hearing held in the statement room No. 3, that the accused couple has nothing to do with the theft of the bottles -which still do not appear-. In addition, he explained to the media that at the time of his arrest they were preparing to spend “a vacation”, but that at no time was his intention to flee from Justice.

“They have been here (in Spain) for many years, they have a localized address and there is no risk of flight,” said Sylvia Crdoba, who has taken charge of the defense of the Romanian-Dutch citizen and the former Mexican miss as soon as she stepped on both Spanish territory on Thursday afternoon on a flight from Dubrovnik to be transferred immediately to the Cceres Police Station, as EL MUNDO announced. In the dungeons of this police station they spent the first night in Spain before being transferred to the courthouse de Cceres, where they accessed in a police van at 10:48 a.m. Then, in the oral hearing, as expected, they have accepted their right not to testify and have only answered some questions related to their situation in Spain that the defense lawyer has formulated.

“We are talking about an accusation of robbery with force whose maximum sentence is six years,” Sylvia Córdoba has pointed out to journalists, who has also based herself on this type of “not so serious” accusation as a reason for not entering the criminal justice system. jail. Also asked about the couple’s constant trips to various European countries for nine months to avoid being tracked down by the police, the lawyer pointed out that “that is what is said, but you have to prove it.” It must be remembered that as soon as they were identified by the security images of the Atrio cameras, in January of this year -three months after the robbery, which occurred in October-, the Police went to the apartment where Constantine Gabriel Dumitru lived, but they could not be located because they had already fled from Spain.

The lawyer from Madrid considers that her clients have already spent two weeks in the Croatian prison before being extradited in “very unfortunate” situations, for which she has also reported that she will request that they be transferred as soon as possible from the Cceres prison to Madrid to be closer to their usual place of residence. “Right now they are being the big losers because they haven’t had a trial, they haven’t been convicted.”

Before the statement, since their arrival at the cacereos courts, both defendants, like last night at the Police Station, have been located in separate cells.

While the legal case continues, the police investigation follows the trail of the bottles, so far without a favorable result, since they could have been sold by order on the black market as one of the hypotheses being considered. In any case, police sources consider -according to what they have pointed out to EL MUNDO- that they are not surprised that today, due to their defense strategy and at this procedural moment, they have refused to testify, but they do have hope that, especially Priscila Lara Guevera, could end up “collapsing” and confessing the whereabouts of the bottles, especially thinking about the risk that her family in Mexico could run if it is suspected that she has been able to seize an important economic prize. Against it plays the little relevance of the penalties that they could face in case of being considered guilty when being tried for “robbery with force”.