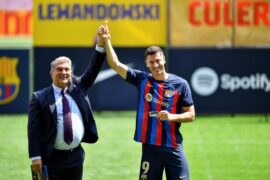 The Barça striker, who already wears the number ‘9’ on his back, experienced the coming-out at the Camp Nou

Robert Lewandowski experienced his second official debut with Bara in just a couple of weeks. The first, in Miami, was not up to par. The second, on the other hand, did justice to a player with his quality and experience. Unlike the rest of signings, the polish could dress short at a Camp Nou with thousands of spectators in the stands, who did not mind facing a blazing sun to see their new idol. An idol that, in addition, already wore what will be his definitive number as a Barça player: the ‘9’.

“It has been a club decision, for reasons that interest the club, image and publicity. We have thought that it was the appropriate decision and it has been taken, with respect for memphisbut he has understood it perfectly”, explained the president, Joan Laporta. The Dutchman, the previous owner of a number normally reserved for the center forward, continues to resist for now to leave the clubno matter how many proposals from clubs like Juventus or Chelsea are around him.

“It was something incredible. I am very excited to see so many fans giving me their support for the first time in this stadium. I want to show them everything I can do as soon as possible.” on the pitch. I’m very happy”, assured a Lewandowski who is well aware that the fight with Real Madrid and Karim Benzema will be one of the points that his new followers are most excited about, but who, for now, prefers to focus on his team. “They won the League and the Champions League, we have to try to overcome them. To be tough, but it’s football. The nice thing is trying to win not only that game, there are many great clubs in the league. There are many challenges, I’m not thinking about Real Madrid or Benzema. for me the most important thing is to play well with Bara”, he asserted.

During the presentation, the striker’s mother wanted to touch the pitch. Something that, as Laporta explained, he already did a long time ago and that he sealed with a kind of prediction. “Robert came 20 years ago, the mother touched the grass, told him ‘someday you will play in this field’ and it has been fulfilled”, revealed the leader, who is convinced that there will be no problems registering the Pole and the rest of the signings. Above all, with the fourth lever already in the chamber: the sale of a further 25% of Bara Studios for another 100 million euros. “We approved the fourth lever because it was planned. It is the 49% operation that was planned. As a precaution and to prevent possible divergences in interpretations, we have done so. We hope not, but if they do occur, there will be no problem,” the president assured.

“We have worked to be able to register all players. In fact, we have worked hard and I think well to qualify. If any further operation is needed, we will do it, but the documentation has already been submitted and we are waiting. The decision must be made by the League, we have complied with everything they require, “said a Laporta who took his chest for the economic management of his board.” Bara has entered in the last two months €868 million, we have a healthy balance sheet and the income statement, too. We have made a great effort, we have had to activate a series of operations that have involved the sale of the club’s assets, always in a controlled manner, controlling the risk, and with the option of recovering them. Work has been done very well, in this line, to clean up the entity and have the fair play necessary to register all the players that we have incorporated, like Robert Lewandowski”, he sentenced.

“We’re making a team. It has been a very difficult year, with making many important decisions and under a lot of pressure. We have endured it and we continue to endure it well, we are very satisfied with everything we have worked on and we continue to do so. The club is on the right track and now it has to pick up cruising speed and have the necessary stability and tranquility to win titles again,” he concluded.