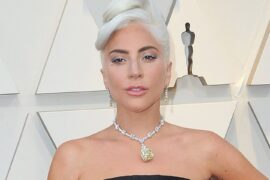 Lady Gaga
She can be seen in “Joker: Folie à Deux”.

With a short teaser clip on social media, Lady Gaga has officially confirmed that she will star in “Joker 2”.

It has already been highly traded: now singer and actress Lady Gaga (36) has confirmed that she will play in the “Joker” sequel. In an Instagram post, she published a short clip in which the words “Phoenix”, “Gaga” and “Joker: Folie à Deux” appear in black letters on a red background. The silhouettes of the two actors mentioned can also be seen. The small heart on the female character’s cheek is said to be a hint that Gaga will be playing the role of Harley Quinn.

“Joker: Folie à Deux” will be in cinemas on October 4, 2024 – exactly five years after the first pure Joker film with Joaquin Phoenix (47) in the leading role as Batman’s opponent. This was announced by the Warner Bros. Discovery film studio last Wednesday. According to rumors, “Joker 2” will not be a drama, but a musical. It is already known that Phoenix will once again slip into the role of Arthur Fleck aka Joker. Todd Phillips’ (51) return to the director’s chair has also been officially confirmed.