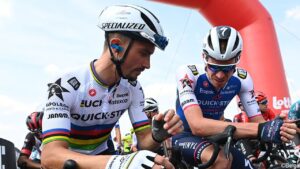 The spring was one with trial and error and just when Julian Alaphilippe had found his way again with a stage win in the Tour of Wallonia, the corona virus appeared.

“I was quite sick and I was not able to train for a week,” says Alaphilippe, who no longer started in the Walloon stage race on Monday 25 July.

“I still feel a bit tired. It’s nice to return to Leuven on Sunday for the Tour of Leuven, but it’s a bit special to race on those World Cup roads with this feeling. I don’t really think about a result. “

Mentally, Alaphilippe has been hit. “I won the first stage and thought everything fell back together, but the next day it didn’t work and I had to give up because of covid.”

“I hear colleagues say we should stop testing, but I was really sick. The symptoms are gone now, but I still feel fatigued.”

“The past training sessions were therefore not great and the race will provide me with answers. Although the bad luck may end for a while.”

“It was endurance training without intensity. I can’t take any risks,” says the Frenchman, who will also ride the Tour de l’Ain (August 9-11) towards the Vuelta (August 19-11 September) after Sunday.

“Yes, it has been a bizarre year,” the rainbow jersey repeated. “The wind doesn’t really blow my back and it’s not obvious.”

“It’s not going the way I wanted it to, because with this jersey you don’t just want to go on an internship or get sick or be in hospital.”

“I now want to have fun again and hopefully my form will follow soon. It was also good towards the Tour de Wallonie and there is still a nice end to the season. I hope that part of the year goes better than the beginning.”

Alaphilippe therefore goes to the Vuelta in function of the World Cup. “I’m not busy with the Vuelta yet. I’m not in top shape, that’s for sure.”

“And as for the World Cup… Honestly: I really don’t think about a third win in a row. I just want to have my abilities again. That’s the priority.”