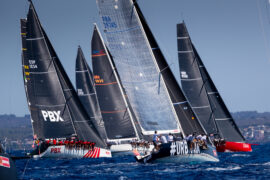 ‘HM Hospitales’, with the Olympic champion as tactician, reinforces its leadership in the BMW ORC 1 class of the Copa del Rey Mapfre

The first day of the final phase of the 40 Mapfre King Cup, disputed yesterday in the bay of Palma, concluded with a frenetic dance of positions in which there were changes of leadership in six of the nine classes. Some of the crews who built a sizeable lead after the first three days of racing may still be banging their heads against the mast as they find themselves lower in the standings today.

The two-act competition system has been especially cruel to the ‘Soho-CaixaBank Theater‘, armed by Javier Banderas and patronized by Daniel Cuevas. The undisputed protagonist of the preliminary phase, in which he counted all the heats for victories, taking a lead of six points over the second classified and 12 over the third, lost first place in the second heat this Thursday when he finished in fifth position . The partial victory of the first match was of little use to the Spanish Swan 42; the Estonian ‘Katarina II’ was more regular (2-2) and became the new leader of the class BMW ORC 2yes, with a single point of advantage over the Andalusian sailboat.

The format of the Cup s smiled at ‘Sorcerer‘, new class leader BMW ORC 3. the ship of Federico Linares He finished the qualifying phase as second, nine points behind ‘Scugnizza’, a difference that decreased to one point when entering the final leg of the regatta. On Thursday, he signed a fourth place and a partial victory, enough to unseat the Italian boat.

There is only one other Spanish boat in compensated time that can boast of being the leader of its class at this point in the game. Its about ‘HM Hospitals‘ in BMW ORC 1.

The sailboat DK 46 of Carles Rodriguez has on board the Olympic champion Fernando Leon to tactics, a talent capable of improving the crew with his decisions on each board. ‘HM Hospitales’ finished the day with a partial victory and a second place, results that reinforce the first place: three points away is the ‘Star‘, patronized by Luis Martinez Doreste; at seven, the German TP52 of the ‘Red Bandit’ and, at seven and a half points, the ‘Palibex‘ of Crooked Pichu.

In the same class, ‘Years 500‘ He still doesn’t show the good feelings he left on the opening day. The TP52 skippered by the king philip He presented a poor card (7-13) with which he fell to eighth place in the provisional classification.

In the smallest boats in the fleet, the J80 and J70, which compete in real time as they are one-designs, there are also Spanish leaders. The ‘Dorsia Covirn‘, patronized by Natalia Va-Dufresneoccupies the first position of the Majorca Sotheby’s Women’s Cup after the double of partial victories harvested yesterday. For his part, the ‘Navy Warden‘, commanded by Gustavo Martinez Doresteis the ship that now commands Herbalife J70.

More there was in BMW ORC 4, where no boat managed to complete the course of the first round, which meant a penalty of 8 points for the entire fleet. And in the second manga, only the ‘Black Octopus’ He read well the change in the route announced by the Race Committee, a success that is worth a lead after a horrible day for the crews.

Regarding the swansthe first leader of the final series in Club Swan 50 is he ‘OneGroup’ of Stefan HeidenreichMeanwhile he ‘Koyre-Spirit of Nerina‘ of Mirko Bargolini and the ‘farstar‘ of Lorenzo Monzo resist at the forefront of class rankings ClubSwan 42 Y Club Swan 36respectively.