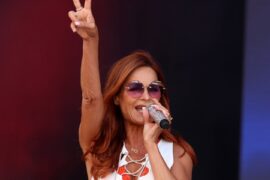 Andrea Berg
Twelfth number one album puts her on the throne

Andrea Berg can look forward to her twelfth number one album in the charts. In doing so, she draws level with superstar Madonna.

Pop star Andrea Berg (56) leads the official German album charts with her new anniversary record “I’d do it again”. This was announced by GfK Entertainment on Friday. But this start-finish victory from zero to one is by no means everything. Because she has now succeeded in the bravura piece for the twelfth time and so she not only overtakes all other German singers, but also equals the international superstar Madonna (63).

A newcomer, US superstar Beyoncé (40) with “Renaissance” also ranks second in the current album charts. She ousts Rammstein with “Zeit” to the three. US hardcore band Stick To Your Guns occupied fourth place with “Spectre” and Beyazz fifth with “Get Numb With Me”.

Nothing is happening at the top of the single charts. The controversial Ballermann song “Layla” by DJ Robin (26) & apron remains at the top. Behind them are Die Zipfelbuben with “Olivia”, who held seventh place last week. Laize and “Paradise” have to give way and are now on the three.

Fourth and fifth place went to Luciano with “Beautiful Girl” and Miksu/Macloud & makko with “Nachts awake”.