On Friday, August 5, the Presidents of Russia and Turkey held four-hour talks in Sochi. Following the meeting, Vladimir Putin and Recep Tayyip Erdogan issued a joint statement reaffirming their intention to further develop bilateral relations based on respect and recognition of mutual interests. The leaders agreed to increase the volume of trade and move forward on economic and energy issues. Summing up the results of the meeting, Deputy Prime Minister of the Russian Federation and co-chairman of the intergovernmental commission Alexander Novak said that a number of decisions taken in Sochi are taking relations between the two countries to a new level. In particular, Moscow and Ankara agreed to start a gradual transition to paying for gas in national currencies – at the first stage, part of the supplies will go for rubles.

Russian President Vladimir Putin and his Turkish counterpart Recep Tayyip Erdogan held talks in Sochi on August 5. According to the press secretary of the Russian leader Dmitry Peskov, the heads of state talked for about four hours. Following the meeting, a joint statement was issued.

“Despite the current regional and global challenges, the leaders reaffirmed their common will to further develop Russian-Turkish relations based on respect, recognition of mutual interests and in accordance with their international obligations,” the document says.

It is noted that the presidents held broad consultations on the agenda of Russian-Turkish relations and agreed to increase the volume of bilateral trade, move forward on issues of the economy and energy, and take concrete steps on issues “which for a long time remained on the agenda of both countries” . These include transport, trade, agriculture, industry, finance, tourism and construction.

The leaders stressed the key importance of trusting relations between Russia and Turkey for achieving regional and international stability. In particular, the important role of the two countries in concluding an initiative on the safe export of grain from Ukrainian ports was mentioned.

“The need to ensure the full implementation of the Istanbul Package Deal in accordance with its spirit and letter was emphasized, including the unhindered export of Russian grain, fertilizers and raw materials for their production,” the statement said.

In addition, the presidents discussed the situation in Syria, reaffirming that they attach great importance to advancing the political process, and pointing out the importance of maintaining the political unity and territorial integrity of the Arab Republic.

“The determination to act together and in close coordination with each other in the fight against all terrorist organizations was reaffirmed,” the document says.

The firm commitment of the parties to the sovereignty, territorial integrity and national unity of Libya was also noted. The next meeting of the bilateral High-Level Cooperation Council, in accordance with the agreements reached, will be held in Turkey.

Following the talks between the Russian and Turkish delegations, Deputy Prime Minister of the Russian Federation and co-chairman of the intergovernmental commission Alexander Novak also made a statement. “Within the framework of the negotiations, very important decisions were reached, which, in fact, are reaching a new level in the development of our relations in trade, the economy and practically in all sectors,” Novak told reporters.

According to him, the heads of state discussed issues related to the transport industry, industry, agriculture, tourism, IT and housing and communal services. In addition, Novak mentioned the agreement reached by the presidents on the start of a gradual transition to paying for energy in national currencies – at the first stage, part of the supplies will go for rubles.

“They discussed the supply of gas to the Republic of Turkey, which is supplied in a fairly large volume – 26 billion cubic meters. m annually. In the process of negotiations, the presidents agreed that we would begin partial gas supplies and pay in rubles,” the Deputy Prime Minister said.

“This is really a new stage, new opportunities, including for the development of our monetary and financial relations,” Novak stressed.

In the open part of the talks, Vladimir Putin noted the important role played by the Turkish Stream pipeline in gas supplies to the European region. According to the president, unlike all other directions of transportation of Russian hydrocarbons to Europe, it “works properly, works rhythmically, without any failures.”

“I think European partners should be grateful to Turkey for ensuring the uninterrupted transit of our gas to the European market,” Putin said.

He added that the supply of various goods and resources to Turkey is also proceeding in large volume and without interruption.

Recall that the Turkish Stream is a gas pipeline laid along the bottom of the Black Sea to the European part of Turkey. The total design capacity of the two lines is 31.5 billion cubic meters. m per year.

In the current realities, a number of gas pipelines from Russia to Europe operate with restrictions. Since the end of July, Nord Stream has been operating at about 20% of its planned capacity due to the situation with Siemens turbines. Earlier, due to restrictions from Poland, gas pumping through the Yamal-Europe highway was stopped, and transit through Ukraine does not operate at full capacity due to Kyiv’s decision to stop pumping through the Sohranivka gas distribution station.

Putin also thanked Erdogan for taking part in negotiating a deal regulating the supply of Russian and Ukrainian grain and domestic fertilizers to world markets. The President noted that this issue is relevant for many developing countries, “which are on the verge of major supply problems.” 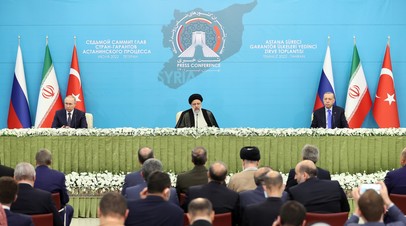 “Moscow is strengthening its positions in the Near and Middle East”: how Putin’s visit to Iran went

President Vladimir Putin positively assessed the cooperation between Russia, Iran and Turkey on the issue of the Syrian settlement. According to the results…

“For all these countries, of course, such decisions that were made directly with your direct participation are very important. I want to thank you for this,” Putin said to Erdogan.

The signing of two interrelated documents designed to solve the problems of food and fertilizer supplies to world markets took place on July 22 in Istanbul. Russian Defense Minister Sergei Shoigu took part in the ceremony on behalf of the Russian side.

In Istanbul, a Joint Coordination Center was formed, in which representatives of Russia, Turkey, Ukraine and the UN track the routes of ships with Ukrainian grain and inspect the ships. The first dry cargo ship left the port of Odessa on August 1.

In turn, Erdogan, in the open part of the talks with Putin, noted that Moscow plays a special role on the world stage, and expressed the hope that the meeting in Sochi will open “a new page in Russian-Turkish relations.” He clarified that this applies to energy, tourism, transport and other areas.

According to Vladimir Olenchenko, senior researcher at the Center for European Studies at IMEMO RAS, the talks can be characterized as a traditional working dialogue between the leaders of the two countries.

“A certain algorithm has already been formed, meetings are held quite often and are of a substantive nature, specific issues are discussed … This was preceded by a trilateral meeting of the leaders of Russia, Iran and Turkey, and, apparently, the continuation of that meeting is now underway, but here more attention is paid to bilateral interactions in regional and global agenda, ”said the interlocutor of RT.