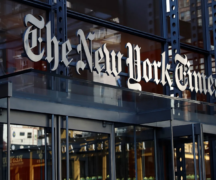 The media points to the 15 million mark by the end of 2027, an almost dystopian number that seeks to generate a newspaper that goes against everything discussed in journalism.

It is clear that the success story worked for ‘the Times’ which invented such a subscription method. But many journalists and media analysts continue to criticize the formula that was debated so many times.

It may be a special case within all journalism, since the popularity of the medium can give you these gigantic amounts of subscribers who trust the content. However, it should be noted that the denial of this way of generating income must be eliminated from any media planning, since its success can be verified.

The emblematic offices of The New York Times.

The media outlet also recorded total revenues of US$555,700,000, a figure that reflects a growth of 11.5% compared to the same quarter of the previous year. Its digital subscriptions accounted for some $238.7 million in revenue.

Similarly, not everything is rosy: something we marked with Twitter and Facebook also happened in the newspaper. Digital advertising revenues fell after the rise of the covid, leading the medium to decrease its profits by 2.4% compared to those of 2021 (it earned US$69,300,000).

The covid, it seems, increased the earnings of digital advertising on the different websites, since thanks to the closures, these advertisements yielded more for the different companies that sought to advertise their brands or companies, than the usual ones on public roads, since people spent most of their time in front of the screen.

It is clear that as one of the main media outlets in the world, the one commanded by Kahn is an example that in this new digital age, quality journalism can continue to survive and generate economic revenue.

In Urgente24 we will continue analyzing the different leading media outlets that generate US public opinion.

Sergio Massa closed the BCRA, US$5 billion, bonds and more

Bonus for retirees and private employees: Who will it be for?

OUT subsidies and a surprise: What will the segmentation be like?

Market: Alert for bonds and dollar after Sergio Massa’s announcement