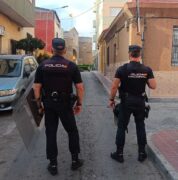 Agents of the National Police They found this Thursday afternoon during a control, a house where six people, five men and one woman, remained kidnapped, in the neighborhood of The Rose Bushes of Ceuta.

The Ceuta Police Superior Headquarters is carrying out checks and searches throughout the city to put an end to the insecurity that has prevailed in some suburban neighborhoods since last April, when an open war began that keeps two warring drug gangs after the murder of a 14-year-old boy, shot in the street while riding a motorcycle with another minor.

Since then there have been several shootouts carried out by gunmen from both gangs that have sowed panic among the residents of Los Rosales and El Principe. Actions that have even taken several people with gunshot wounds to the hospital, the last one a week ago remains in serious condition in the hospital. Ceuta Hospital ICU: a 20-year-old young man wounded on July 26 by several shots to the legs and abdomen.

In one of these searches and controls, the agents have detected the house where the six people were held against their will. The criminals They kept a woman tied to a bed. According to police sources, they were people migrants who were kidnapped in that place to later transfer them to a boat and try a pass to the peninsula, a profitable business for the gangs that operate in the Strait.

In recent weeks, the Civil Guard, is acting on the coasts of southern Spain to avoid the passage of migrants in semi-rigid boats and powerful jet skis. Traffickers do not hesitate to get rid of people if they detect that agents of the Maritime Service they detect them before reaching their destination. On more than one occasion they have been the ones who have saved the life of a migrant after being thrown into the water by criminals who act without caring about the danger they run by abandoning them in the middle of the sea.