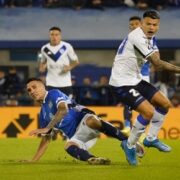 Lucas Janson he is a record man in Velez: with the goal he scored against Talleres, for the first leg of the round of 16 of the Copa Libertadores de América, he became the player who scored the most times in the history of the competition with the blue v on.

Emerged from the inferiors of Tigre, he moved to Vélez in mid-2019, at the age of 24, after having become champion of the Super League with the Victoria club. Since then he has tried to make a name for himself in the Velez institution, and this Wednesday he finally succeeded: the goal that scored the T for the partial 1-0 at Amalfitani was his ninth in the Copa Libertadores playing for Fortín, which from now on has his top scorer in history in the competition. Gone are Patricio Camps and Santiago Silva, both with eight conquests.

In total, counting all the tournaments, Janson has accumulated 122 games and 31 goals with the Vélez shirt. And he wants to keep adding…

TOPICS THAT APPEAR IN THIS NOTE