Catastrophic news was expected during the meeting for investors of Warner today, but the truth is that the star announcement is no longer a mere confirmation of something that had already been announced months ago: HBO Max and Discovery + are going to merge into a single streaming service and its launch in the United States is scheduled for summer 2023.

All about the merger of HBO Max and Discovery +

For now the name of the new platform is unknown -There were rumors that HBO Max was going to become a simple tab within Discovery +, but everything points to a completely new platform that mixes the best of both-, but it is a matter of time before Warner publishes more details about it.

David Zaslavcurrent CEO of the company, has stressed that what is really important is quality and not quantity, because “owning the content that really resonates with people is much more important than having a lot of content“. We will have to see how this affects the number of titles produced by HBO Max, but Warner’s latest movements point to a drastic reduction.

Something that Warner has specified tonight is what they will be the star titles of the new platformwhich also indicates that priority will be given to the projects associated with them: 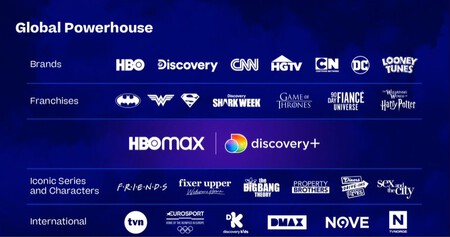 In addition, Warner has also announced that the arrival of the new platform in Europe is not expected until early 2024. Of course, taking into account that titles are already disappearing without prior notice, do not be surprised that more HBO Max original movies and series vanish by surprise.

Finally, the company has also announced a free access model with adsbut he did not want to specify when it would be launched, so it is expected that it will not be available to coincide with the arrival of the new platform.