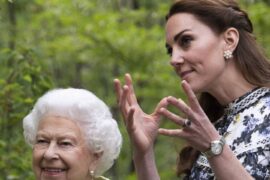 It is no coincidence that Duchess Kate is one of the most popular royals. Apparently she learned a lot from Queen Elizabeth II.

Nobody is as popular among British royals as Queen Elizabeth II (96) and Duchess Kate (40). Perhaps Prince William’s wife (40) is still ahead of her husband because she apparently copied a few things from the queen, who ranks first.

Kate adapts to the demands

Kate learned from Elizabeth II by “observing” her, explains Queen biographer Sally Bedell Smith (74) in an interview with the US magazine “People”. The Duchess “absorbed” many things. In public, the two actually often look not dissimilar. However, it is unlikely that the Queen ever taught Kate directly, as insiders explain.

Apparently the author Sarah Gristwood shares this view. “The Queen has always preferred to do something rather than say it,” she explains. If she did have advice for Kate, it was probably very discreet. Instead of direct instructions, Queen Elizabeth II may have used a phrase like “I think that went pretty well,” Gristwood speculates. Kate is also personally willing to “adapt to the needs of the institution.” This is important for a “successful cogwheel” in the royal machinery.

Polls also show that Prince William and Duchess Kate are doing an “impeccable” job as representatives of the Queen, as Bedell Smith says. According to a survey by the polling institute YouGov, the two shared the top spot in popularity with the Queen in the second quarter of 2022. 75 percent of those surveyed have a positive opinion of Queen Elizabeth II, 68 percent of Kate and 66 percent of her husband William. In comparison: William’s father Prince Charles (73) is 42 percent, his brother Prince Harry (37) is only 34 percent.