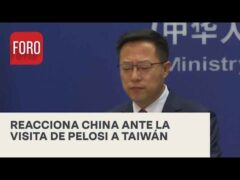 Nancy Pelosí is on a tour of Asia in which, surprisingly, she made a stop in Taiwan. Although for more than seven decades this island has been a subject of interest and conflict for the United States and China, the Speaker of the US House of Representatives reaffirmed its democratic support for the archipelago with this visit

When in May 2022, Joe Biden warned that an invasion of China to Taiwan would cause the deployment of Washington’s military defense against this nation, the general fear was that a new military conflict, similar to the one still facing Ukraine and Russia, would take place between the most important powers of the East and the West.

However, it was not a war that unleashed the political tensions between these nations, but heNancy Pelosi’s visit to Taiwan despite the risk that this implied for the US and the rest of the international community.

After a series of speculations about his possible visit to Taiwan, Pelosi arrived on the island aboard a United States Air Force plane. in the midst of a panorama full of political tensionsin the early hours of Tuesday, August 2.

Though Taiwan and its inhabitants are a symbol of rivalry between the United States and China.for the current president of the United States House of Representatives, her position and visit focused specifically on issues of human rights, democracy and good relations between her country and the Taiwanese government of Tsai Ing-wen.

Although until now the relationship between China and the United States has been diplomatic, various analysts and specialists from around the world, such as CNN’s Stephen Collinson, have expressed their concern about the retaliation that the Asian country is already taking against the island and, perhaps, other nations.

Nancy Pelosi’s interest in Taiwan and its challenge to China

From the beginning of his political career, Pelosi has spent much of her time questioning China’s economic, political, and ideological methods.even considering that the actions that this country exercises against other nations, especially those adjacent to its territory, obey a show of authoritarian power.

“Our delegation’s visit to Taiwan honors the United States’ unwavering commitment to support Taiwan’s vibrant democracy, our discussions with the leaders reaffirm our support as a partner, and further our shared interests, including advancing a relationship in the region.” Indo-Pacific that is free and open,” Pelosi said on Twitter.

Therefore, despite the fact that the president of the United States himself warned of the risk that Pelosi’s trip posed, the president maintains her interest in confronting China’s political positions, as happened in 1991, when she protested in Tiananmen Square in Beijing for the victims of the 1989 massacre, in which a group of intellectuals and students were violently repressed by the People’s Republic of China for demanding a democratic government.

“The solidarity of the United States with the 23 million people of Taiwan is more important than ever, as the world faces a choice between autocracy and democracy”, “said the president on her Twitter account upon arriving at the island.

Our visit reiterates that America stands with Taiwan: a robust, vibrant democracy and our important partner in the Indo-Pacific. pic.twitter.com/2sSRJXN6ST

But for China, this can be taken as a provocation, since if the US improves its relations with Taiwan and encourages its autonomy, the economic and political interests of the country would be affected by having a commercial partner of its biggest rival, just a few kilometers away.