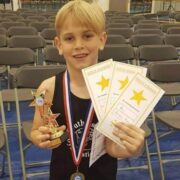 Hollie Dance arrived home to find her son, 12-year-old Archie Battersbee, unconscious with a bandage around his neck. It happened on April 7 of this year in the United Kingdom: the mother believes that this was the result of a viral challenge from the social network Tik Tok, known as the “Blackout Challenge”, which consists of squeezing the neck until one loses consciousness due to lack of oxygen.

The child was transported to the Royal London Hospital in London where he was diagnosed with “brain death”. The diagnosis was the start of a legal battle between the hospital and Archie’s parents, who refused to accept the doctors’ recommendation to shut down the life support machines that have been maintaining the child’s vitals, who has been in a coma for three years. months.

Doctors argue that the child’s body will eventually collapse even with life-support treatments, but the family remains hopeful and refuses to believe that this will be Archie’s outcome. The case went to court and the parents even resorted to international bodies, namely the United Nations (UN) within the scope of the International Convention on the Rights of Persons with Disabilities, which wrote a letter addressed to the doctors of that hospital appealing for them to machines stay on.

However, the British court rejected the UN’s appeal, arguing that the body has no binding force under national law and, after several requests and deliberations, the judges gave the doctors the right, considering that the maintenance of life support treatments would not be necessary. in the “best interest” of the child.

Judge Says Archie Is “Not The Same Boy” His Parents Know

The court’s three judges decided to delay the end of Archie’s treatment for 48 hours – until this Wednesday – to allow the child’s parents to file an application with the European Court of Human Rights to consider the case. Andrew McFarlane, one of the judges who made the decision, said the child “is no longer the same boy in the photograph” that went viral after the case was publicized. Archie is now “someone whose bodily functions are all maintained by artificial means,” he added.

Leaving the Royal Courts of Justice in London, Hollie Dance assured that she will not give up on her son: “The system should not be allowed to do this to people. All I asked for from day one was time. boy and I will fight as much as possible.”

As promised, Archie’s parents appealed the decision through the Supreme Court, which, according to Sky News, confirmed that it had received the request, which will receive the court’s attention “as a matter of urgency”. So doctors will have to prolong Archie’s life-support treatment, at least until the Supreme Court rules on the matter.

Archie’s case is not unique – according to The Washington Post, there are already several families facing such an outcome in the wake of the Tik Tok challenge. Nylah Anderson, a 10-year-old girl from Chester, Pennsylvania, was found unconscious in her bedroom in December 2021. After five days in hospital, Nylah died.

Other families from several countries have reported similar situations over the past two years: James Boyd-Gergely, a 14-year-old boy from Australia, died after participating in the challenge in April 2020, and the same happened to a 10-year-old girl. , from Palermo, Italy, who died in January of last year.

Speaking to The Washington Post, at the time of the death of two 12-year-old children – one from Colorado and one from Oklahoma, in the United States – in 2021, a Tik Tok spokesperson called the challenge “disturbing “, adding, however, that people seem to learn about the same through sources other than Tik Tok, being “a challenge that already existed” before the emergence of the social network [criada em 2016]. “It was never a Tik Tok trend,” she stressed.

Given the seriousness of these situations, it is natural for parents to wonder what they should do to prevent their children from falling into the temptation of imitating the content they watch on the Internet, as they do with the famous Tik Tok dances and others. social network challenges. But anyone who believes that banning children’s access to content is the solution is wrong.

According to psychologist Bárbara Ramos Dias, specialist in Adolescent Psychology and author of the book “Consegues Tudo o Que Queres”, which explores this theme, “it is not worth prohibiting” access to applications, especially because children “have access to to these applications in schools” when interacting with peers. The solution, therefore, involves “warning of the dangers and teaching them how to surf the Internet safely”, as they teach their children “to cross the road, to set the table or not to accept anything from strangers on the street”.

“It is up to us to give them responsibility, maturity, teach them to say no. If we control or forbid them, then they will do much worse”, he says, invoking the old maxim that “the forbidden fruit is always the most desired”.

For parents who believe that approaching the subject can have the opposite effect, that is, it can arouse children’s interest in these contents, psychologist Bárbara Ramos Dias guarantees that the worst thing is not to mention these topics and not warn about the dangers: “We must warn them so that they are prepared so that, if that happens, they will be able to say ‘no’.”

The psychologist and psychotherapist Tânia Annes, from Clínica da Mente, also considers that banning is not the solution, but argues that “parents must have some authority in this matter”, first of all through parental control of the content and the time children pass on the Internet. There are already applications that allow you to do just that, such as Google’s Family Link, which parents can install on their devices and remotely control what children can access when using cell phones and tablets.

“All apps have these restrictions on content that can be seen, the number of hours they can be in front of the screen, so parents must take advantage and must use these parental controls to block certain content that is not suitable for the age of the children”, he says.

In addition to parental control applications, Tânia Annes suggests that parents do not allow children to access passwords for social network applications, so that they have to ask parents for permission to do so.

“We cannot give a child a cell phone and let him browse the Internet freely without any supervision. This is not educating”, he stresses.