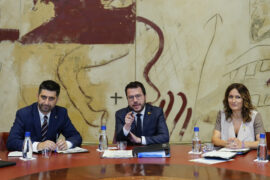 last chance The Superior Court of Justice of Catalonia (TSJC) is studying a contentious-administrative appeal filed by the Assembly for a Bilingual School (AEB) against the instructions of the Department of Education of the Generalitat for public and concerted centers for the next course that begins in September. The entity considers that the Government It violates fundamental constitutional rights, such as non-discrimination or equality in education, by not including Spanish as a vehicular language in these instructions along with Catalan, Aran and Catalan sign language.

For this reason, the court urgently studies the request of the AEB, which has 10 days to formalize the demand once the Generalitat provided the documentation on the next course at the request of the magistrates. The AEB asks that “at least one subject, matter, area or activity of trunk or analog character” is taught in Spanish, despite the fact that it does not establish any percentage in the use of languages, following the new decree law of the Government on linguistic projects that the Constitutional Court must examine at the request of the TSJC.

Specifically, the AEB challenged the point of the administrative agreement on the organization and management of educational centers for the course that begins in September in which reference was made to the use of languages ​​in the educational system, as well as the linguistic projects and the priority objectives of the educational system. The Generalitat brought the file to the court that will now examine it to see if it violates fundamental rights as the AEB considers, since they believe that both Spanish and Catalan, being official languages, are “vehicular in Catalan non-university education”.

In this way, the Assembly for a Bilingual School does not give up the battle after seeing how the TSJC suspended the application of teaching a minimum of 25% of Spanish in the classrooms by asking the Constitutional Court to rule on the new regulations promoted by the Government to avoid this ruling. The law of linguistic uses approved in the Parliament in June, with the votes of PSC, left, together Y In Com Podem, establishes the nature of the vehicular language in the teaching of Catalan and considers Spanish as the curricular language, but without setting percentages.

Catalan as a social integrator

The instructions published by the Generalitat for the next academic year following this regulation approved two months ago remind us that Catalan is the language of the institution and, therefore, the language of habitual use in all the spaces of the center, in the relationship with the educational community and with all social classes in general or “the vehicle of expression and communication habitually used, both in the internal activities of the center and in those of external projection”. In addition, the regulation indicates that “the cultural and civic factors are driven by the desire to form a Catalan citizenry identified with a common culture, in which the Catalan language becomes a basic factor of social integration” and adds that the Department wants promote “the country’s linguistic model in schools, promoting the Catalan language as a vehicle in a multilingual and intercultural project”.

However, the AEB considers that these guidelines promoted by the Department of Education do not follow pedagogical objectives but have intentions of a clear identity cut and for this reason it calls on the court to urge the Government to adopt measures that guarantee that at least one subject, matter, Area or activity of a core or analogous nature is developed in Spanish along with the fact that in the evaluation tests the students are offered the possibility of carrying out the exercises also in this language.

Thus, they point out that “the significance of the documentation approved by the Department and now challenged lies in the fact that it is the first time that the new regulation approved during the year 2022 will be specified in a school year” and they do so without ordering the authorities. schools that “consider Spanish as the vehicular language”, which “necessarily limits the rights of students, with a clear violation of the Constitution”, for the AEB.

The AEB believes that “Catalan students have the right to be taught in the two vehicular languages ​​also in the 2022-2023 academic year and for this, Spanish must be the vehicular language and as such also the reference language in the linguistic projects of educational centers and in the annual programming of the educational centres.This is feasible, without the need to apply the percentage system, since it is enough to indicate the list of subjects to be taught in each language in the linguistic project or in the annual programming of the centre. “.

For this reason, they maintain that the current norm must be “interpreted” based on the “sociolinguistic reality of the center, the environment and the objectives of linguistic normalization, the linguistic project must specify the list of subjects, subjects or activities that will be taught in Spanish, in Catalan (and in Aran in the arn valley) and in other non-official languages”.

The president of the Generalitat referred yesterday to the non-application of at least 25% of Spanish in Catalan classrooms, Peter Aragons, who assured that he has avoided complying with the order of the TSJC “thanks to the fact that the Parliament legislates and the Government promotes”. In this sense, he indicated that the judicial decision was “a situation of difficulty, not in the Government, but in the whole of the education system of our country” that the Generalitat has eluded, for the moment waiting for the Constitutional, “with consensus, with ambition, with rigor and with great agreements”.