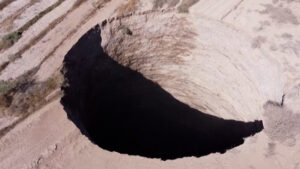 The hole, which continues to grow, is located in an area of ​​mineral deposits

It is 32 meters in diameter, an increasing depth and an unknown origin: it is the giant sinkhole that appeared in northern Chile and that worries the entire community that lives nearby. “It is still active, it is still growing and it is something that has not been seen in our community,” explained Cristóbal Ziga, mayor of the town of Tierra Amarilla, in the northern region of Atacama, 800 kilometers north of Santiago de Chile.

Ziga acknowledged that it is not yet known how the huge hole originated, which was discovered on Saturday by a neighbor. Tierra Amarilla is located near the Alcaparrosa Mine, which is part of a larger complex, the Candelaria Mine. Atacama is one of the main mining regions of a country rich in minerals, the main exporter of copper in the world.

“We are concerned, since it is a fear that we have always had as a community, the fact that we are surrounded by mining deposits and underground works under our community,” acknowledged the mayor. “We request that it be possible to clarify what is the reason and why this event occurred, what are the reasons, if it is that the collapse is the product of the mining activity that is below or if it is of another nature.”

The National Service of Geology and Mining of Chile (Sernageomin) has been working since the beginning of the week in the place where the sinkhole occurred.

The huge hole was 25 meters in diameter when it was first studied, but in the meantime it has grown to 32. Its depth is estimated at 64 meters. Located just 600 meters from Tierra Amarilla and a health center, the fear of the residents in the area is that similar phenomena will be repeated in populated areas.

“This is not the first time that something like this has happened,” assured Mario Vargas, regional governor of Atacama, although he admitted that this latest sinkhole is the largest ever seen in the area.