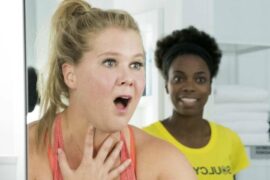 preview
“I Feel Pretty” on ProSieben

In “I Feel Pretty” (ProSieben), Amy Schumer declares war on body shaming. In “Alte Bande” (Das Erste), Mario Adorf plans to break out of a prison for the elderly. In “The Bone Hunter” (kabel eins) Angelina Jolie and Denzel Washington hunt a killer.

She is not written to on dating portals, ignored in bars and referred to the online site for plus sizes in stylish fashion boutiques: Renee (Amy Schumer) is certain that this rejection has something to do with her supposedly “average” appearance. But when she finds a whole new self-confidence after a fall in the gym and a traumatic brain injury, luck seems to follow her. If only the newfound magic would last longer.

Boxer (Mario Adorf) is the king of the correctional facility. Nothing works without him in “his” prison. However, his advanced age is increasingly taking its toll, which has not escaped the notice of the prison doctor. Boxer is to be transferred to a prison specially for seniors – the idea alone makes the prison veteran shudder. But then his buddy Henne (Hermann Beyer) tells him that he has finally found what he is looking for in the search for Boxer’s great love Kathrin (Hildegard Schmahl).

April, 1945. As the Allies make their final and decisive push into the European theater of war, a battle-hardened Army Sergeant named Wardaddy (Brad Pitt) commands a Sherman tank and its five-man crew on a deadly mission behind enemy lines. Hugely outnumbered and outgunned, Wardaddy and his men must contend against overwhelming odds as they attempt to strike at the very heart of Nazi Germany.

Once the top forensics expert in the New York homicide squad, he’s now plagued by suicidal thoughts. After an accident at work, Lincoln Rhyme (Denzel Washington) is paralyzed from the waist down, only able to move his head and his left index finger. It is only when his ex-colleagues ask him for help in hunting down a mysterious killer that he finds new courage in life. A bestial murder was committed in a train tunnel, in which the perpetrator apparently deliberately left behind various traces and clues.

Alex’s (Ina Paule Klink) first case is about murder. Thomas Winter’s (Tobias Oertel) wife has been strangled. Thomas is considered a suspect, but protests his innocence. Then Alex helps him escape. Private detective Wilsberg (Leonrad Lansink) is appalled by her behavior. So that she doesn’t lose her license, he starts investigating. Was Thomas really struck down by an ominous third person? Or is he only saying that because he murdered his wife?